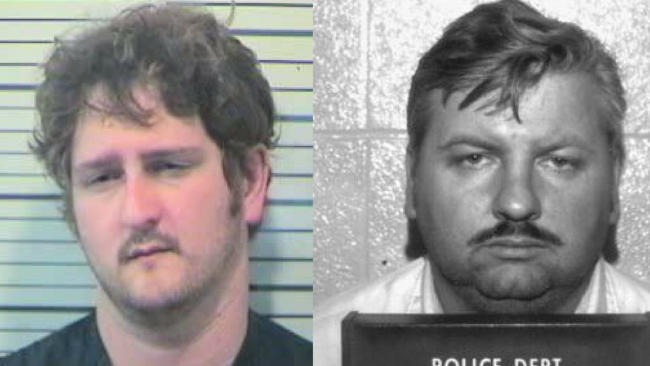 MOBILE, Ala. -- An Alabama man who says he idolized serial killer John Wayne Gacy faces charges after his mother's body was found buried under a porch.

Mobile County Sheriff's Office Capt. Paul Burch says 32-year-old Nathaniel Sebastian is accused of murdering 60-year-old Susan Mayo, whose body was found in a 55-gallon drum beneath a porch. Police told Al.com that when deputies arrived at the home to execute an additional search warrant Wednesday, Sebastian told them,  "OK, my mama's under the front porch. Y'all got me."

"He just knew he was caught and he knew what we were going to find," Captain Paul Burch of the Mobile County Sheriff's Office told Al.com. "It really was just an unexpected, spontaneous and unsolicited statement."

Mayo, of Wilmer, had been reported missing since June 17. Her son also faces other charges including abuse of a corpse.

Al.com reports Burch says investigators believe Sebastian got the idea to bury his mother in that manner after claiming to be a fan of Gacy, who kept bodies of his victims under his home. Gacy was executed in 1994.

"He's always said he was a fan of John Gacy, who was a serial killer who kept bodies underneath his home. So this isn't surprising this is what happened here," Burch said, according to CBS affiliate WKRG.

Burch said Sebastian had mentioned the serial killer on Facebook, as well as to one of the detectives on the case.

Burch said that friends and family told them Sebastian has an "extremely violent temper."

"That's been one consistent thing that everyone has said about him," Burch told the station. "And we believe that this is what led to the death of Susan Mayo."

When asked by a WKRG reporter whether he had anything to say in his defense, Sebastian said, "I loved my mother."