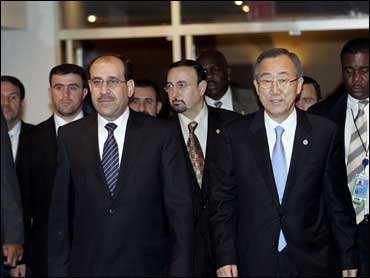 Iraqi Prime Minister Nouri al-Maliki said Sunday the shooting deaths of Iraqi civilians - allegedly at the hands of private Blackwater USA security guards - pose "a serious challenge to the sovereignty of Iraq" and cannot be accepted.

The Sept. 16 killing of at least 11 civilians near a square in central Baghdad has highlighted the practices of foreign security contractors whose aggressive protection of Western diplomats and other dignitaries has long angered Iraqis.

U.S.-Iraqi relations have been further strained by the U.S. detention of an Iranian on Thursday in northern Iraq who was accused by the U.S. military of smuggling weapons to Shiite militias for use against American troops.

Al-Maliki, in an interview with The Associated Press ahead of his appearance Monday at the U.N. General Assembly, condemned the detention and said the man had been invited to Iraq.

"The government of Iraq is an elected one and sovereign. When it gives a visa it is responsible for the visa," he said. "We consider the arrest ... of this individual who holds an Iraqi visa and a (valid) passport to be unacceptable."

Meanwhile, an Iraqi official conceded Sunday that Blackwater USA's exit would create a "security vacuum" in Baghdad and said the U.S. and Iraq were instead working on revamping regulations governing private security companies after a deadly shooting of civilians.

Following the Sept. 16 Nisoor Square shooting, the Interior Ministry banned Blackwater from operating in Iraq, but rolled back after the U.S. agreed to a joint investigation. The company resumed guarding a reduced number of U.S. convoys on Friday.

But officials said new rules have to be put in place to govern the behavior of the security companies.

"If we expel this company immediately there will be a security vacuum that will demand pulling some troops off the battlefield," Tahseen Sheikhly, a civilian spokesman for the seven-month-old offensive against militants in Baghdad and surrounding areas. "This will create a security imbalance in securing Baghdad."

The Iraqi Interior Ministry complained that U.S. authorities had ignored repeated complaints about past Blackwater behavior as the company was implicated in six other fatal shootings, including one on Feb. 7 outside Iraqi state television in Baghdad that killed three building guards.

"We tried several times to contact the U.S. government through administrative and diplomatic channels to complain about the repeated involvement by Blackwater guards in several incidents that led to the killing of many Iraqis, but there were no concrete results. Our complaints went nowhere," deputy Interior Minister Hussein Kamal said.

"We have no official documentation on file from our Iraqi partners requesting clarification of any incident, but we're open to sharing relevant findings from our past investigations," she said. "We are approaching this in the spirit of cooperation and we have a joint interest in coming to a productive conclusion."

The U.S. administration is scrambling to quell Iraqi anger over the Sept. 16 shooting, in which Blackwater guards protecting a State Department convoy allegedly opened fire on Iraqis. Blackwater says its contractors were responding to an armed attack. Iraqi officials and witnesses say the shooting was unprovoked, although they have offered conflicting details.

Blackwater is one of three private security firms employed by the State Department to protect its personnel in Iraq, and a decision to force it to pull out would create tremendous difficulties for the U.S. government.

But Kamal called its behavior "unacceptable and a humiliation to Iraq."

A joint U.S.-Iraqi commission is being formed to investigate the incident and examine the rules governing private security companies that have largely operated without oversight since the war began in March 2003.

Nantongo, the embassy spokeswoman, said the panel would have eight members on each side, including three from the U.S. military and five embassy officers, but the commission has yet to meet.

Iraqi officials have said in the wake of the Nisoor Square shooting that they will press for amendments to the 2004 directive.

"Iraqi criminal law should be activated on Iraqi soil against any kind of criminal activity," Sheikhly said.