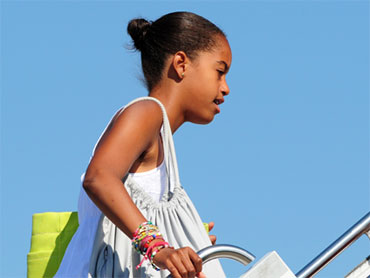 (CBS/AP) First daughter Malia Obama sure is growing up. The summer of 2010 was proof of that, with many changes coming to her life -- including the addition of braces and a separate vacation schedule from her parents.

Though she went on trips with her family to Bar Harbor, Maine and Martha's Vineyard, Mass., Malia had some time doing what kids do  -- going to camp.

It was President Barack Obama who revealed she planned to spend most of August there.

The prospect of spending even part of the summer without his first-born around also had Mr. Obama waxing sentimental.

Asked about summer vacation plans, he told an interviewer "a month of it's going to be taken up with Malia going away for camp, which she's never done before. And I may shed a tear when she's on the way out."

Though her camp plans were largely kept under wraps, you can take a look at all the other trips Malia embarked on throughout the summer -- in our gallery here.