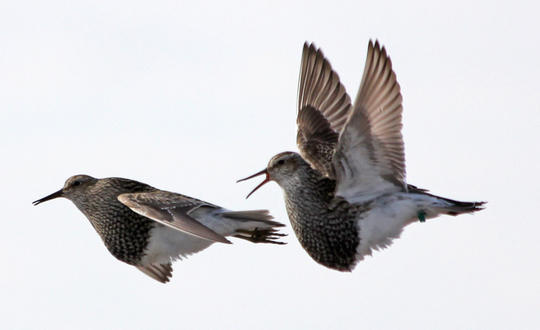 WASHINGTON — You fly more than 100 miles for love. You get rejected. You fly another 100 miles. Another rejection. And another.

That’s the high-flying but futile sex life of the male pectoral sandpiper looking for love in northernmost Alaska, according to a new study.

Some males are more persistent than others. Researchers tracked one desperate small shorebird that logged more than 8,100 miles in two dozen different hook-up attempts over a frenetic four weeks.

“They’re definitely trying hard to flirt and court,” said biologist Bart Kempenaers of the Max Planck Institute for Ornithology in Germany. “They are not particularly successful most of them. Failed Don Juans mostly.”

Sandpipers migrate from South America to breeding grounds in the Arctic tundra in the summer. The males tend to be sex crazy during this time because females are only fertile for a few weeks. They flit all over the place, trying hard to seal the deal with loud throaty hoots as many times as possible. The problem for them is that the females only mate once or twice a season.

“Copulations are incredibly rare,” Kempenaers said. “The males need to try and try and keep at it.”

Researchers tracked the activity of 100 male birds during a breeding season. It is “the most extreme example” of promiscuity in animals seen yet, said Kempenaers, who led the study published Monday in the journal Nature.

The males mostly forgo sleep as they embark on non-stop flights in search of a mate, getting by on snatches of shut-eye lasting several seconds at a time, Kempenaers said.

The average bird flies about 110 miles between mating attempts. In a breeding season, the males log on average about 1,900 miles, a bit farther than flying from Los Angeles to Chicago.

Sandpipers can fly 40 hours non-stop around 37 mph but these long trips often end up in rejections. Those that successfully mate don’t have a role in raising the offspring, Kempenaers said.

George Divoky, a biologist at the scientific group Friends of Cooper Island that monitors the changing Alaskan Arctic, said in general Arctic shorebirds are shrinking in population.

He called the study on this species of bird impressive, adding that it “will make me think differently about every pectoral sandpiper I see during the summer.”

Striving to save a species