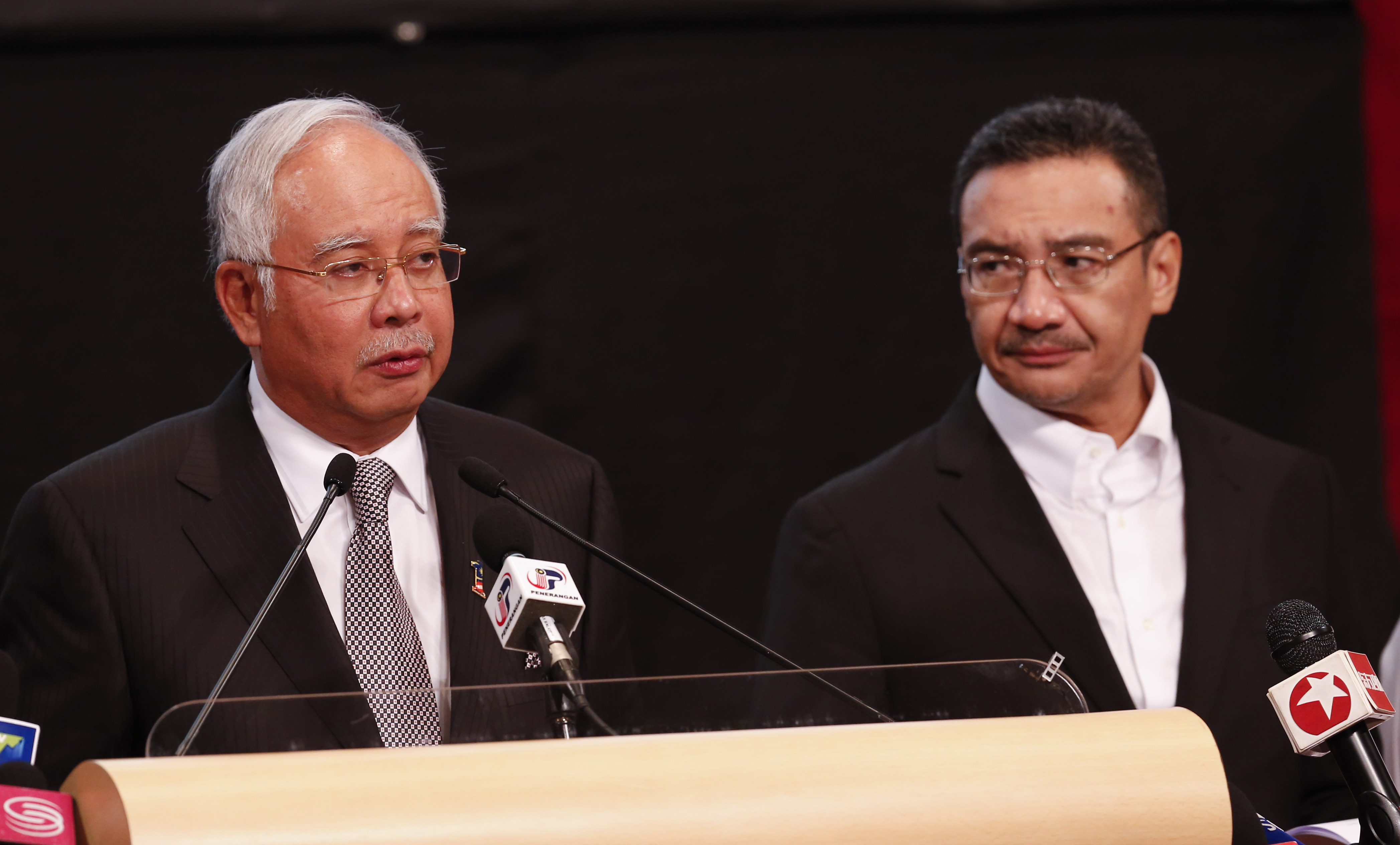 KUALA LUMPUR, Malaysia -- It was the unwelcome, anguishing news that families of the missing had dreaded, and when they heard it from Malaysia's prime minister Monday night there were shrieks and intense heartbreak: The missing Malaysian Airlines flight whose fate was a mystery that consumed the world had crashed into a remote corner of the Indian Ocean.

The news, based on fresh evidence gleaned from an unprecedented analysis of satellite data, meant it was all but impossible that any of the 239 passengers and crew on board the jetliner could have survived.

That realization may help bring some closure to families 17 days after their nightmare began when the Boeing 777 inexplicably disappeared from Asian skies during what was supposed to be a routine overnight flight from Malaysia's capital to Beijing on March 8. But the latest clue is also only a small step toward solving one of the greatest puzzles in aviation history.

With the location of Flight 370 itself still unknown - most likely somewhere at the bottom of the sea in a remote part of the southern Indian Ocean - profound questions remain unanswered about what brought down the aircraft and why.

And the grueling search for the wreckage and the plane's black boxes could take years. The task, involving a multinational force sweeping a vast region of ocean whose dark floor is up to 23,000 feet deep, has been daunting. So much so, that it is also possible that what is left of the plane may never be found.

In an indication of the challenges still facing the search operation, the Australian Maritime Safety Authority, which is coordinating the search in the south Indian Ocean, said the search was suspended on Tuesday morning because of adverse weather conditions. Rough seas with heavy rain and gale-force winds forecast forced searchers to hold off on their efforts until conditions improve.

In Beijing, family members who have followed every twist and turn in the search shrieked and sobbed uncontrollably when they heard the news. One woman collapsed and fell on her knees, crying "My son! My son!"

Xu Dengwang, whose wife was a passenger on Flight 370, was reeling from the shock in his room at the Lido hotel in Beijing, where many family members have been waiting for days for news.

"I learned the news from television. I couldn't handle it. I fainted," Xu told CBS News, speaking through a translator.

"How can you announce this news to the world without providing evidence?" he asked.

Some relatives of Chinese passengers aboard the flight read out an emotional statement, calling for Malaysia Airlines and Malaysia's government to be held accountable, CBS News Shannon VanSant reported from Beijing.

"Malaysia Airlines, the government of Malaysia... and the military forces of Malaysia have concealed, delayed and hid the truth from the relatives and the peoples of the world," the statement said. "This despicable act aimed to fool the relatives of the 154 Chinese passengers have devastated us physically and mentally, while misleading and delaying the rescue operation, wasting a lot of manpower, material resources and leading to the loss of precious rescue time."

Some received the news by text message, said Sarah Bajc, who has been awaiting news of the fate of her boyfriend, Philip Wood, ever since the plane disappeared.

"Malaysia Airlines deeply regrets that we have to assume beyond any reasonable doubt that MH370 has been lost and that none of those on board survived," a portion of the text message said.

Bajc noted in an email that the prime minister's announcement made no mention of confirmed wreckage, "so no real closure," but she also said the time for grief had begun.

"I need closure to be certain but cannot keep on with public efforts against all odds. I STILL feel his presence, so perhaps it was his soul all along," she wrote. "It looks like the first phase of our mission has ended. Now Philip's family and I will need some time for private grief."

Dressed in a black suit, Malaysian Prime Minister Najib Razak somberly announced the news in an unexpected late night statement to reporters in Kuala Lumpur. The information, he said, was based on a study of data from a satellite that had received the final known signals from the plane as it tracked southward.

The data indicated that the jetliner flew "to a remote location, far from any possible landing sites," Najib said.

"It is therefore with deep sadness and regret that I must inform you that, according to this new data, Flight MH370 ended in the southern Indian Ocean."


In China's capital, family members had been called to a hotel near the airport to hear the announcement. Afterward, they filed out of a conference room in heart-wrenching grief.

Medical teams arrived with several stretchers and at least one elderly man was carried out of the conference room on one of them, his faced covered by a jacket. Minutes later a middle-aged woman was taken out on another, her face ashen and her eyes blank and expressionless.

At the Lido hotel, where many of the Chinese relatives have complained about what they have described as incomplete or contradictory information provided by the airline and Malaysian authorities, two distraught women and a man came to address journalists nearly two hours after the announcement.

"I tell you, this was the wrong way to release this information," one of the women said between sobs, speaking over the bellows of security guards trying to hold back the crush. "It's all so black," she said, using the Chinese expression for opacity and deceit.

In Kuala Lumpur, family members also broke down in sobs.

Selamat Omar, the father of a 29-year-old aviation engineer who was on the flight, said: "We accept the news of the tragedy. It is fate."

Before the prime minister's announcement, CBS News correspondent Seth Doane spoke to the wife of a crew member, who is still trying to "pretend" that her husband is around.

Jacqui Gonzales told Doane that she still texts her husband, including one message that said: "Come home, we're waiting."

After the announcement, Gonazales was grieving inside herhome, where a relative said she was "crying and praying" and didn't want to talk to the media. From the street, Doane said he could hear sobbing inside the house.

In a statement to the families, Malaysia Airlines said: "We know there are no words that we or anyone else can say which can ease your pain."

The airline said it would transport families to the western Australian city of Perth if parts of the plane are found and brought to a military base there now being used by search planes. It said the "ongoing multinational search operation will continue as we seek answers to the questions which remain."

The plane's disappearance has baffled investigators, who have yet to rule out mechanical or electrical failure, hijacking, sabotage, terrorism or issues related to the mental health of the pilots or someone else on board.

Malaysian authorities have said that evidence so far suggests the plane was deliberately turned back across Malaysia to the Strait of Malacca, with its communications systems disabled. They are unsure what happened next.

Earlier Monday, Malaysia's police chief, Inspector General Khalid Abu Bakar, reiterated that all the passengers had been cleared of suspicion. But he said the pilots and crew were still being investigated and declined to comment on whether officials had recovered files that were deleted a month earlier from the home flight simulator of the chief pilot.

Officials have said the plane automatically sent a brief signal - a "ping" - every hour to a satellite belonging to Inmarsat, a British company, even after other communication systems on the jetliner shut down.

The pings did not include any location information, but an initial analysis showed that the location of the last ping was probably along one of two vast arcs running north and south.

Najib said Inmarsat did further calculations "using a type of analysis never before used in an investigation of this sort," and had concluded that the plane's last position was "in the middle of the Indian Ocean, west of Perth."

He gave no indication of exactly where in the Indian Ocean the plane was last heard from, but searchers have sighted possible debris in an area about 1,240 miles southwest of Perth, and Najib said more details would be released Tuesday.

Search teams from 26 nations have pored over radar data and scoured a wide swath of Asia for weeks with advanced aircraft and ships, but no confirmed wreckage has been found.

The hunt is now considered a race against time because of the battery life of the "pinger" in the black box is running out and may have less than two weeks left.

On Monday, an Australian navy support vessel, the Ocean Shield, headed toward the search zone and was expected to arrive in three or four days, a defense official said. The ship is equipped with acoustic detection equipment that can search for the black box.

The U.S. Pacific Command said it is also sending a black box locator in case a debris field is located, one that can be pulled behind a vessel at slow speeds and could hear the pinger down to a depth of about 20,000 feet, Cmdr. Chris Budde, a U.S. 7th Fleet operations officer, said in a statement.

The deployment is part of "a prudent effort to pre-position equipment and trained personnel closer to the search area," he said.

U.S. Deputy National Security Adviser Ben Rhodes on Monday stopped short of saying the U.S. had independent confirmation of the status of the missing airliner. He noted the conclusion of Malaysian authorities that the Boeing 777 had plunged into the Indian Ocean and said the U.S., which has been assisting the search effort, was focused on that southern corridor of the ocean.