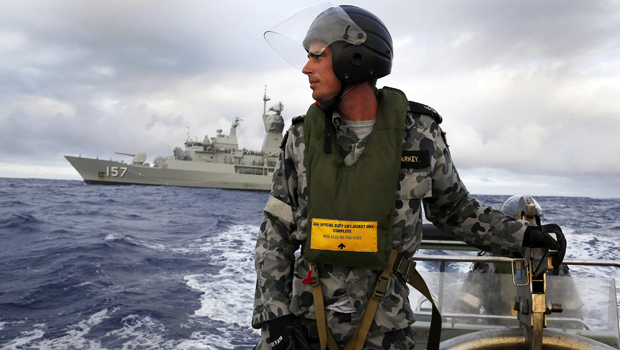 PERTH, Australia -- A robotic submarine looking for the missing Malaysia Airlines jet is expected to finish searching a patch of the Indian Ocean seabed within a week after so far coming up empty, and the search area may be expanded after that, officials said Saturday.

As the hunt for Flight 370 hit the six-week mark, the Bluefin 21 unmanned sub began its seventh trip into the depths off the coast of western Australia. Its search area forms a 6.2-mile circle around the location of an underwater signal that was believed to have come from the aircraft's black boxes before their batteries died. The sonar scan of the seafloor in that area is expected to be completed in five to seven days, the search center said in an email to The Associated Press.

The U.S. Navy sub has covered around 51 square miles since it began diving into the depths on Monday. The first trip was cut short because the sub exceeded its "maximum depth limit" of 15,000 feet. Then, a built-in safety feature was triggered and that automatically returned the submersible to the surface.

The latest data are being analyzed, but nothing has yet been identified.

"The narrowing of the search for today and tomorrow is at a very critical juncture, so I appeal to everybody around the world to pray and pray hard that we find something to work on over the next couple of days," he said.

But he added that there were no plans to give up once the Bluefin concludes its work. Instead, he said the scope of the search may be broadened or other assets may be used.

"The search will always continue," he said. "It is just a matter of approach. All efforts will be intensified for the next few days with regards to the underwater search."

Meanwhile on Saturday, up to 11 aircraft and 12 ships continued to scan the ocean surface for debris from the Boeing 777 that disappeared March 8 en route from Kuala Lumpur to Beijing with 239 people on board.

Radar and satellite data show the plane mysteriously veered far off course for unknown reasons and would have run out of fuel in the remote section of the southern Indian Ocean where the search has been focused. Not one piece of debris has been recovered since the massive hunt began.

The tiresome search, which continues to raise more questions than answers, has tormented the families whose loved ones were aboard Flight 370. About two-thirds of the passengers were Chinese.

On Friday, around three dozen Chinese relatives held a prayer meeting in Beijing for their missing spouses. Many sobbed heavily as candles burned on a table in the shape of a heart with "MH370" in the middle. A banner behind them read in Chinese: "Husband, wife, come home soon."

There have been numerous leads throughout the painstaking hunt, but all have turned out to be false. The latest hope involved an oil slick found near the underwater search area, but analysis of a sample taken from the site found it was not connected to the plane.

The most promising development came when four underwater signals were detected April 5 and 8. The sounds were consistent with pings that would have been emanating from the flight data and cockpit recorders' beacons before their batteries died.

The underwater operation is being complicated by the depth of the largely unexplored silt-covered sea floor. The U.S. Navy's unmanned submarine has gone beyond its recommended limit of 15,000 feet, according to the U.S. 7th Fleet. That could risk the equipment, but it is being closely monitored.

The search coordination center has said the hunt for floating debris on the surface will continue at least into next week, even though the head of the search effort, Angus Houston, had earlier said it was expected to end sooner.

On Saturday, the visual surface search was to cover an estimated 19,382 square miles of sea.