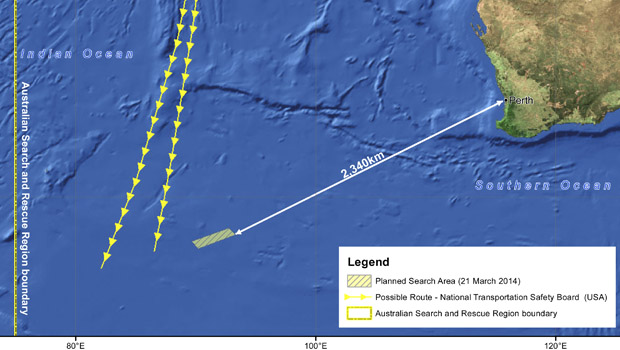 Getting more planes up in the air out over the site at the daylight became more difficult.

Still, Australian officials said Friday that one search plane had arrived back in the search area, two others were en route and a fourth was scheduled head there a bit later. One merchant vessel was also there, they said, and a second was en route.

With winter approaching, the south Indian Ocean is rough and the skies cloudy, both added challenges for the Australian pilots.

A freighter used searchlights early Friday to scan rough seas in one of the remotest places on Earth after satellite images detected the debris.

In what officials called the "best lead" of the nearly two-week-old aviation mystery, a satellite detected two objects floating about 1,000 miles off the coast of Australia and halfway to the desolate islands of the Antarctic.

The development raised new hope of finding the vanished jet and sent another emotional jolt to the families of the 239 people aboard.

Sarah Bajc, whose boyfriend, American Philip Wood, was aboard the plane, is one of those anxiously awaiting news.

"I'm desperate to hear it is an airplane wing and there are survivors clinging to it, and one of them is Philip," she told CBS News by email. "I'm apprehensive it will be unrelated and the wait will just continue after many more hours of misery."

One of the objects on the satellite image was almost 80 feet long and the other was 15 feet. There could be other objects in the area, a four-hour flight from southwestern Australia, said John Young, manager of the Australian Maritime Safety Authority's emergency response division. "This is a lead, it's probably the best lead we have right now," Young said. He cautioned that the objects could be seaborne debris along a shipping route where containers can fall off cargo vessels, although the larger object is longer than a container. Four military planes searched the area Thursday without success.

A U.S. Navy P-8 Poseidon aircraft was scheduled to join the search, but like the other planes, it will have enough fuel for only a few hours before returning to Perth.

"It is a very long journey to the site and unfortunately, aircraft can only have one or two hours over the search area before they need to return to the mainland for fuel," Warren Truss, who is currently Australia's acting prime minister while Tony Abbott is overseas, told Australian Broadcasting Corp. He said that weather conditions in the area were poor and may get worse.

"And so clearly this is a very, very difficult and challenging search. Weather conditions are not particularly good and risk that they may deteriorate," Truss said.

The objects spotted on the satellite images were at the extreme southern end of the projected southern search corridor, so in an area where all earlier information suggested crews might expect to find the missing jet. The largest object could be one of the Boeing 777's wings. As the flight would have been near the end of its fuel supply in reaching the area, the fuel tanks in the wings would be close to empty, giving the wings added buoyancy.

The Norwegian cargo vessel Hoegh St. Petersburg, with a Filipino crew of 20, arrived in the area and used searchlights after dark to look for debris. It will continue the search Friday, said Ingar Skiaker of Hoegh Autoliners, speaking to reporters in Oslo.

The Norwegian ship, which transports cars, was on its way from South Africa to Australia, he said. The Australian Maritime Safety Authority said another commercial ship and an Australian navy vessel were also en route to the search area.

"CBS This Morning" contributor Michio Kaku, a physics professor at the City University of New York, said the area is "quite turbulent, and even a gentle current of five miles an hour could carry debris of hundreds of miles across."

The search is a "literal race against time," according to Kaku. "The black box has a beacon, but that beacon has a battery -- a battery with a life 30 days," he explained. "And we've already lost two weeks, so of the window of opportunity is closing very rapidly."

Satellite imagery experts said the lead is worth investigating.


"It would be very nice if you could see a whole wing floating there, then you could say, 'OK that's an airplane.' When you're looking at something like this you can't tell what it is," said Sean O'Connor, an imagery analyst with IHS Janes.

But another analyst said the debris is most likely not pieces of Malaysia Airlines Flight 370. There have been several false leads since the Boeing 777 disappeared March 8 above the Gulf of Thailand en route from Kuala Lumpur to Beijing.

The development marked a new phase for the anguished relatives of the passengers, who have been critical of Malaysian officials for not releasing timely information about the plane. While they still hope their loved ones will somehow be found, they acknowledged that news of the satellite images could mean the plane fell into the sea.

"If it turns out that it is truly MH370, then we will accept that fate," said Selamat Bin Omar, the father of a Malaysian passenger. The jet carried mostly Chinese and Malaysian nationals.

But he cautioned that relatives still "do not yet know for sure whether this is indeed MH370 or something else. Therefore, we are still waiting for further notice from the Australian government."

Malaysian officials met with the relatives Thursday night in a hotel near Kuala Lumpur, but journalists were kept away. After the meeting, groups of people left looking distraught.

Hamid Amran, who had a child on Flight 370, said questions asked at the meeting made it "apparent that Malaysia's military is incapable of protecting its own airspace."

He said he "believes that my child and all the other passengers are still alive. I will not give up hope."

A man who would only give his surname, Lau, said he was there to support a Chinese couple who had lost their only son.

"It appears some families are slowly accepting the worst outcome," he said.

Malaysian Airlines CEO Ahmad Jauhari Yahya said the relatives in Kuala Lumpur were being given updates by high-level officials "two or three times a day."

"We do take care of the next of kin, and assuming it is confirmed, that the aircraft is located somewhere close to Australian, we will obviously make arrangements to fly the next of kin there," he said.

A group of Malaysian government and airline officials flew Thursday night to Beijing to meet families there.

Young said the ocean in the search area is thousands of meters (feet) deep.

DigitalGlobe, a Longmont, Colo.-based company, said it provided the images to Australian officials. The Australian Maritime Safety Authority released two images of the whitish objects. They were taken March 16, but Australian Air Commodore John McGarry said it took time to analyze them.

"The task of analyzing imagery is quite difficult, it requires drawing down frames and going through frame by frame," he said.

The hunt has encountered other false leads. Oil slicks that were seen did not contain jet fuel. A yellow object thought to be from the plane turned out to be sea trash. Chinese satellite images showed possible debris, but nothing was found.

But this is the first time that possible objects have been spotted since the search area was massively expanded into two corridors, one stretching from northern Thailand into Central Asia and the other from the Strait of Malacca to the southern Indian Ocean.

Malaysian Defense Minister Hishammuddin Hussein made it clear Thursday that although international search efforts are continuing both on land and in sea in the northern and southern hemispheres, the effort is mostly concentrated south of the equator over the vast Indian Ocean.

Flight 370 disappeared on a night flight from Kuala Lumpur to Beijing. Malaysian authorities have not ruled out any possible explanation, but have said the evidence so far suggests the plane was deliberately turned back across Malaysia to the Strait of Malacca, with its communications systems disabled. They are unsure what happened next.

Police are considering the possibility of hijacking, sabotage, terrorism or issues related to the mental health of the pilots or anyone else on board.

Malaysian authorities have said that files were deleted Feb. 3 from the home flight simulator of the missing plane's pilot, Zaharie Ahmad Shah, and Hishammuddin said he had no new information on efforts to recover those files.

CBS News confirmed the FBI has been provided electronic data to analyze from a flight simulator belonging to the pilot of the missing jet. It is expected the hard drive will be brought to an FBI lab in the United States. This FBI is lending technical expertise, not taking over the investigation.

It was not clear whether investigators thought that deleting the files was unusual. They might hold hints of unusual flight paths that could help explain where the missing plane went, or the files could have been deleted simply to clear memory for other material.

President Obama said finding out what happened to the missing Malaysia Airlines plane is a top priority for the U.S.

"We have put every resource that we have available at the disposal of the search process," Obama said in an interview with Dallas-Fort Worth television station KDFW. He said the nation's thoughts and prayers were with the grieving families. Three Americans were aboard the flight.