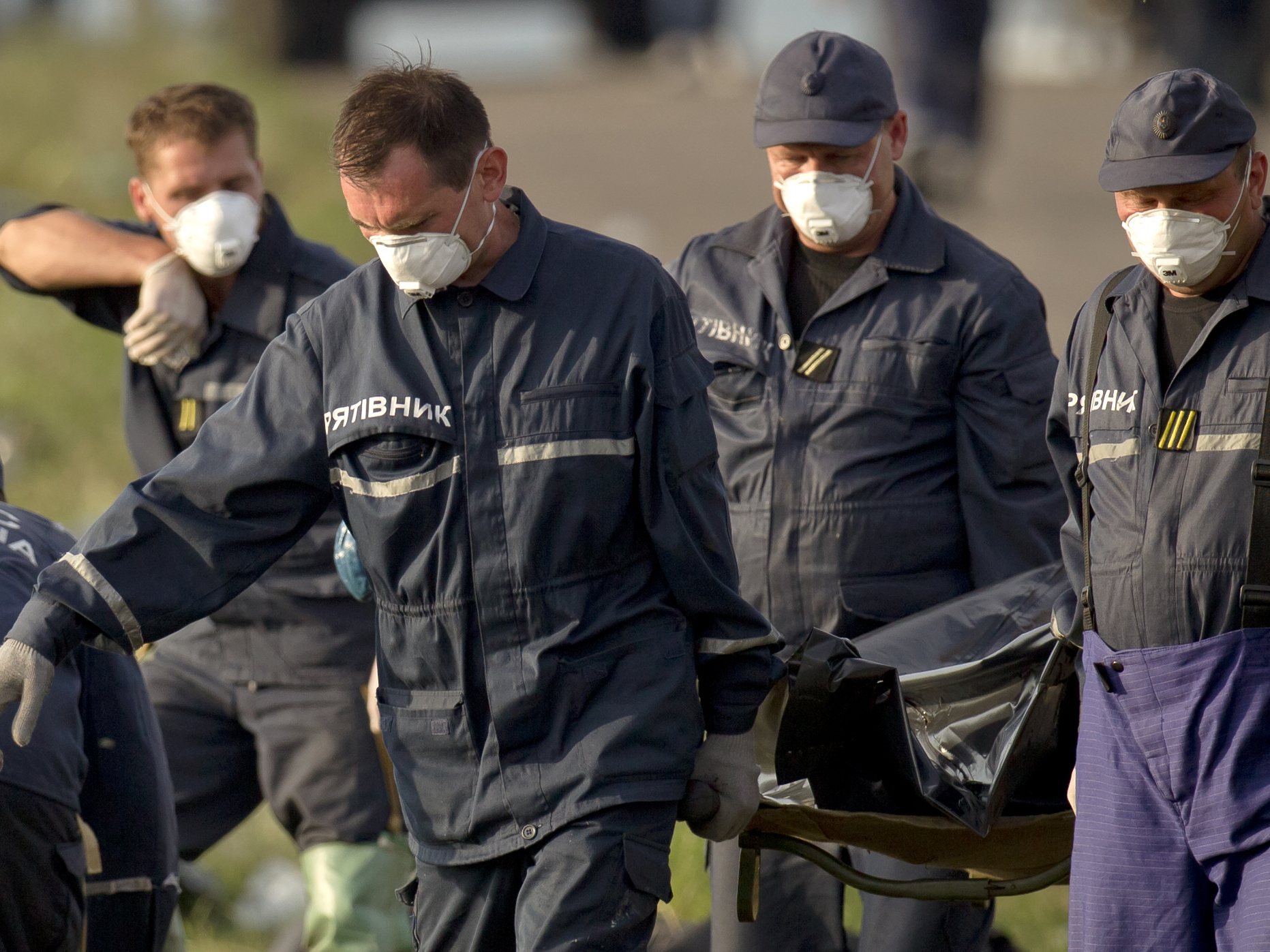 TOREZ, Ukraine - Pro-Moscow rebels piled nearly 200 bodies from the downed Malaysian jetliner into four refrigerated boxcars Sunday in eastern Ukraine, and cranes at the crash scene moved big chunks of the Boeing 777, drawing condemnation from Western leaders that the rebels were tampering with the site.

The United States, meanwhile, presented what it called "powerful" evidence that the rebels shot down the plane with a Russian surface-to-air missile and training. Although other governments have stopped short of accusing Russia of actually causing the crash, the U.S. was ahead of most in pointing blame on Moscow for the downing of Malaysia Airlines Flight 17 that killed all 298 people aboard.

"What we have is a lot of evidence that points in the direction, that raises very, very serious questions," U.S. Secretary of State John Kerry said on "Face the Nation."

In what appears to be the latest piece of evidence, U.S. intelligence has detected movement of SA-11 surface-to-air-missiles - the same type responsible for downing the airliner - from rebel-held areas of Ukraine into Russian territory, CBS News chief national security correspondent David Martin reports.

That is just the latest link in a chain signaling Russian involvement. An intelligence assessment posted to the website of the U.S. Embassy in Kiev said a convoy of up to 150 vehicles carrying military equipment crossed from Russia into Ukraine last weekend; on Monday, Ukrainian intelligence recorded pro-Russian rebels making "repeated references to having and repositioning [the SA-11] system; on Thursday, at the same time the airliner went down, U.S. intelligence detected a SA-11 missile launch from rebel-controlled territory.

The Ukrainian military also has the SA-11, but the U.S. intelligence assessment said "we are confident no Ukrainian air defense systems were in range of the crash." That leaves Russia as the sole suspect.

Leaders of Britain, France and Germany spoke to Russian President Vladimir Putin by phone late Sunday, urging him to use his influence on the separatists to ensure the victims could be repatriated and international investigators could have full access to collect evidence. They said European foreign ministers will be meeting in Brussels Tuesday to consider further sanctions on Russia.

More than three days after the jetliner crashed, international investigators still had only limited access to the sprawling fields where the plane fell.

British Prime Minister David Cameron, in a blistering opinion piece for the Sunday Times, said "the growing weight of evidence" suggests the rebels shot down the plane, and if that is so, "this is a direct result of Russia destabilizing a sovereign state, violating its territorial integrity, backing thuggish militias and training and arming them."

Russian officials have blamed Ukraine's government for creating the situation and atmosphere in which the plane was downed, but has yet to directly address the allegations that the separatists were responsible or were operating with technical assistance from Moscow.

The 42-square-mile crash site, spread out on farmland and villages, looked dramatically different Sunday, a day after armed rebels had stood guard while dozens of bodies lay in the summer heat. The rebels were gone, and 192 bodies were loaded into the refrigerated train cars in the rebel-held town of Torez, nine miles away.

Observers from the OSCE - the European security organization - were brought to the train to view the bodies. But delegation spokesman Michael Bociurkiw said that couldn't count or examine them, reports CBS News correspondent Mark Phillips.

"We had the doors opened for us, the stench was overwhelming as you might imagine, but the refrigeration is there."

The Ukrainian government said in a statement on its website that a second train with four refrigerator cars had arrived at Torez station.

Emergency workers, who the rebels have allowed to operate under their control, were searching the sprawling fields. Cranes moved pieces of the plane around, apparently to look for more bodies underneath.

By Sunday night, Ukraine's emergency services agency said the total number of bodies found was 251, with dozens of body parts.

Kerry expressed outrage at the "grotesque" behavior of the rebels at the crash scene, slamming "drunken separatists" for moving the bodies while limiting access of international investigators.

Dutch Prime Minister Mark Rutte, whose country lost 192 citizens on the plane, told a news conference that repatriating the bodies was his "No. 1 priority."

He said all efforts were aimed at getting the train with the bodies to "territory controlled by Ukraine," adding that a Dutch military plane was being sent to Kharkiv to set up a coordination center.

Bociurkiw said reports from the group's investigators in Ukraine suggest some bodies were incinerated without a trace.

"We're looking at the field where the engines have come down. This was the area which was exposed to the most intense heat. We do not see any bodies here. It appears that some have been vaporized," he said from the crash site.

Rebel leader Alexander Borodai denied the rebels were trying to tamper with evidence, saying the bodies would be turned over to a team of Malaysian experts he was expecting.

A group of investigators that included Malaysian officials was in Kiev, but said they wouldn't go into rebel-held areas until they get better assurances about security. The Ukrainian government, which has responsibility for the investigation, has also asked for help from the International Civil Aviation Organization - a U.N. body - and Eurocontrol, a European air traffic safety organization.

Borodai insisted the rebels have not interfered with the investigation, and said he would turn over the plane's flight data and cockpit voice recorders, or "black boxes," as well.

"The bodies will go nowhere until experts arrive," Borodai said in the rebel-held city of Donetsk.

But it was clear that the rebels were interfering in the investigation.

Lyubov Kudryavets, a worker at the Torez morgue, said that on the evening the plane went down, a resident brought in the bloodied body of a child, about 7 or 8 years old. On Saturday, militiamen came to take away the body away, she said.

"Even without any deliberate attempt at a cover-up, the crash site is already compromised in forensic terms," said Keir Giles, an associate fellow at the Chatham House think tank. "A reconstruction of the aircraft fuselage and wings would give a picture on how the missile struck and what kind it was. If any aircraft parts have already been removed ... this compromises the objectivity of the investigation."

Any further definitive evidence of a Russian role in the tragedy likely will have to come from intelligence-gathering rather than the crash scene, CBS News correspondent Bob Orr noted.

"That missile launcher is long gone. It's not there anymore. And that wreckage has been picked through and cherry-picked to a degree that Mr. Putin can leave the rest of it there and it can't tell us a definitive story. So this has already been corrupted to the point where the physical side of this is even less important than it would have been otherwise."

On the diplomatic front, Western leaders stepped up the pressure on Putin. The leaders of France, Germany and Britain issued a joint statement demanding that he force the separatists to "finally allow rescuers and investigators to have free and total access to the zone."

Rutte said the Dutch foreign minister was headed to the U.N. to lobby "to further expand the international coalition pushing for quick recovery of the bodies and getting to the bottom of the terrible events on MH17."

In the Netherlands, worshippers at church services prayed for the victims, as anger grew over the rebels' hindering of the investigation.

Silene Fredriksz-Hoogzand, whose son, Bryce, and his girlfriend, Daisy Oehlers, were among those killed, said she was appalled their bodies weren't being handed over.