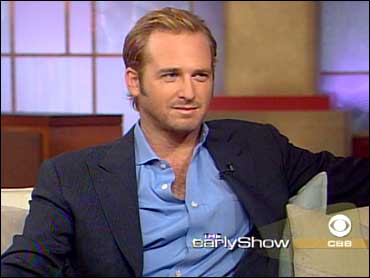 Josh Lucas has built a strong resume with roles in diverse films such as "Sweet Home Alabama," "Hulk," and his hit from earlier this year, "Glory Road."

Now, he's back in theaters as a passenger on a doomed ocean liner in the big screen, big-budget disaster flick "Poseidon," a remake of the 1972 hit, "The Poseidon Adventure." "Poseidon" opens Friday.

Lucas starts out as a passenger — but by the end of the film, he's a hero.

On The Early Show Friday, Lucas of co-anchor Julie Chen that "Poseidon" "is just an action adventure purely based on people trying to survive this ship."

"Basically," Lucas concurred, it's "people getting from point A to point B as quickly as possible."

Lucas said he did most of his own stunts.

"I think there's one shot in the movie that's not me, from what I remember," he told Chen. "They basically built this ship and, in a sense, I'm on the lot at Warner Bros. and (they) filled (it) with water and set it on fire. A lot of times, we had about three or four inches of breathing room above us.

"There would be very bizarre moments where something would pull you under, like one of the water cannons or one of the strange devices they were using to create a torrent under that water; dead bodies, fake dead bodies, obviously.

"Some of (the dead bodies) were actually real, and we would forget which ones were real and which one were fake. At one point, Richard Dreyfuss stepped on one of their heads!"

How were Lucas' swimming skills heading into filming?

"I'm a diver and yeah, I could swim," he replied, "and yet, I had no idea how difficult this thing was going to be. I don't think any of us did.

In some scenes, he told Chen, "the water was on fire. We had to swim under real fire."

Lucas says "all of us" got bruised up making the movie: "It was really the whole sort of achievement of this movie is that (director) Wolfgang (Petersen) said, 'I do not want to use CGI (computerized special effects), I don't want to see stunt doubles, I want to see the people really go through this, because I want the audience to relate to what the story is and not be watching people who are extraordinarily prepared for the situation, who are Navy Seals.'

"They're just normal people, and he wanted not to see stunt doubles. So, he put us all in the situations."

On a personal note, Lucas said he is "repetitively single."

What is he looking for in an ideal mate?

"You know who's got it right," Lucas responded, "is Kurt Russell (who also stars in "Poseidon") and (his long-time partner) Goldie Hawn, definitely. I think you find someone who inspires you and keeps you as interested both physically and intellectually and with humor and there's a reason why they've survived the way that they have. So I'm definitely looking for that and I'm gonna wait until I find it."