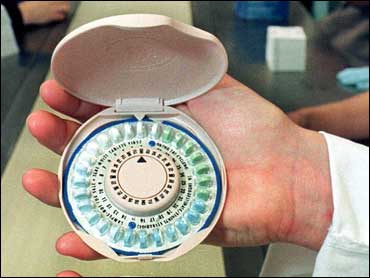 School officials on Thursday defended a decision to allow children as young as 11 to obtain birth-control pills at a middle-school health center, saying the new policy is aimed at a tiny number of sexually active students.

King Middle School will become the first middle school in Maine, and apparently one of only a few in America, to make a full range of contraception available, including birth-control pills and patches.

Students would need parental permission to use the city-run health center in the school, but they would not have to tell them they were seeking birth control.

"People I associate with are looking at me like, are you guys crazy? Is this really going to happen in Portland?" said school committee Chairman John Coyne, who opposed the new policy in the 7-2 vote by the Portland School Committee on Wednesday night.

There are no national figures on how many middle schools provide such services. Most middle schoolers range in age from 11 to 13.

"It's very rare that middle schools do this," said Divya Mohan, a spokeswoman for the National Assembly on School-Based Health Care.

This week, the health center asked the committee to make birth-control pills available to high school-aged students who were still in middle school and unable to access the contraception available at the high school, said Portland School Committee member Robert O'Brien.

School officials said five of the school's 510 students would have qualified for the birth control under the program last year.

"As a parent, I would hope that my child would come to me first," school committee member Sarah Thompson told CBS News. "But if she doesn't feel comfortable, then I know that there's somebody there, and a support system in place for them to be able to talk to somebody."

Bishop Richard Malone said the decision will inevitably lead to more sexual experimentation among younger children. It also sends a message that the government should replace parents in certain parts of a child's life, even without the parents' knowledge, he said.

"I join the number of parents who have expressed their outrage and disbelief at the decision which affects young girls aged 11 to 14 years old," Malone said. "When contradictory messages are given to children from important authority figures such as parents and school officials, it can create more confusion and difficulty for children themselves in making this important life decision."

"They don't just have a giant punch bowl full of pills," he said,

The birth control will be given out only after extensive counseling, and no prepubescent children will get it, O'Brien said.

But Coyne said a physically mature, savvy 11-year-old could get the birth control once the permission slip to use the center is signed.

"I think she could navigate the system," he said.

The King Middle School is among Portland's most diverse schools, with 31 languages spoken there and 28 percent of its students foreign-born. The school, located on the same peninsula as downtown Portland, draws from the islands in Casco Bay, wealthier neighborhoods overlooking the bay, and low-income apartments.

Fifty-four percent of the students are part of the federal free lunch program, which is an indicator of poverty.

Principal Michael McCarthy said the school had just one pregnancy last year, but students were reporting they were sexually active. The center has dispensed condoms since 2000, but because it could not prescribe birth-control pills, nurses referred the students to Planned Parenthood or Maine Medical Center.

"When they followed up, they found that in many cases, the kids weren't doing that," McCarthy said.

Sex with a nonspousal minor under 14 is considered gross sexual assault in Maine, and officials said it was unclear whether nurses at the health center would be required to report such activities.

"If we're required to report anything that we think is illegal, we certainly will do that," said Gardner, who said health centers already comply with state law and report cases in which child abuse or sex abuse are suspected.

Gov. John Baldacci said he had reservations about the program and was trying to learn more.

"I appreciate local officials trying to address a need in a medically appropriate way, but these are children," he said in an interview with the AP. "An appropriate balance must be struck addressing the troubling situation that a small number of students find themselves in and recognizing the important role that parents and other family should play."

McCarthy, the principal, said he sympathizes with those who have reservations about the program.

"I think it makes people nervous to think middle school students are having sex. Frankly, it makes me nervous. But there's a small population out there that needs protection," he said.

Carol Schiller, the mother of a boy and girl who graduated from King, said she was "elated" at the committee's vote. She said critics shocked that 11-year-olds have sex should "get over it."

"It's much more important that we reach out to these kids and get them the tools they need to stay safe, stay in school and get an education," she said.