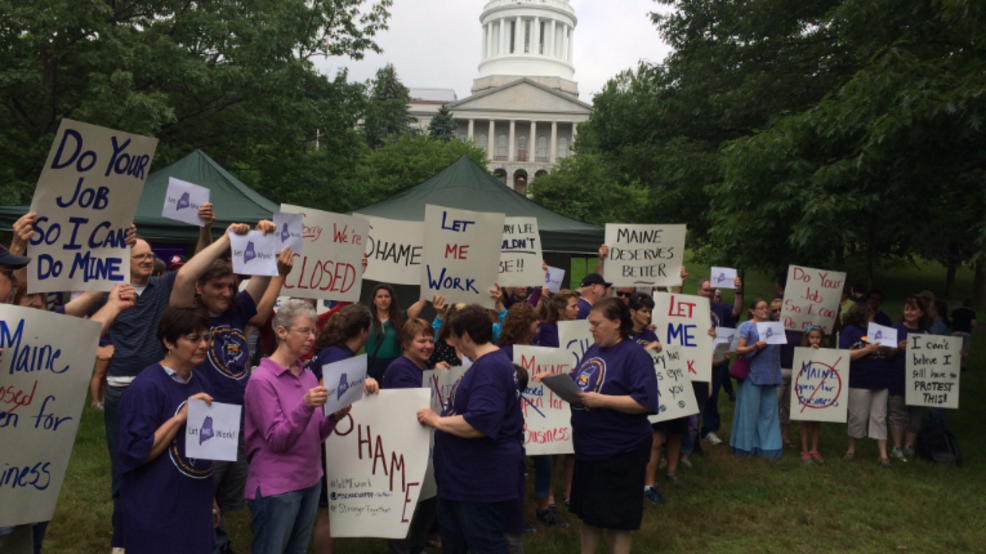 AUGUSTA, Maine -- Republicans in Maine offered a new budget proposal on Saturday they said could end the state's shutdown amid criticism from anxious state workers who blamed them for the impasse.

The state's first shutdown in a quarter century began after lawmakers failed to meet Friday's deadline for a new state budget. House Republicans objected to $162 million in increased education spending in a proposed two-year, $7.1 billion budget.

Union members and Democrats were the first to arrive when lawmakers returned Saturday, and they held a rally outside the House floor, chanting "shame!" and "do your job!" at Republicans as they walked by.

Protesters marched to the state house and took to chanting in front of the house chambers, CBS affiliate WGME reports. Inside the state house, angry protesters gathered to give and listen to impassioned speeches.

LePage this week vowed he would not sign any budget that did not include his overall income tax cut proposals.

House Republicans presented a new plan on Saturday that eliminates lodging tax increases, includes the $162 million in education funding and ensures that emergency personnel who work during the shutdown are compensated.

"What this document does, I believe, is get us to yes," said Rep. Ken Fredette, the Maine House Republican leader. "I will move heaven and earth to do that."

A budget conference committee must first approve the budget. The committee sent the proposal to a fiscal office on Saturday so its impact can be reviewed. Committee members say the proposal needs to come back to them for a potential vote. If approved in committee, the proposal could go to the full Legislature for a vote.

LePage's office said the governor was aware Republicans were working on a new plan and "the governor looks forward to reviewing that proposal in the hopes it will provide a solution to the shutdown."

LePage had offered a late alternative budget proposal on Friday. Democratic House Speaker Sara Gideon characterized that proposal as more like a "list of demands," and it has not gone forward. On Saturday, some Democrats charged that LePage's late proposal was just an attempt to sabotage lawmakers from passing a budget at all.

"That's how we feel we've been hijacked," said Rep. Robert Alley, D-Beals. "He wants to get his own agenda out. Schooling's our number one priority."

LePage's office said Saturday his alternative proposal was "a vehicle for compromise." His office also said legislative leaders have informed him it's not logistically possible for the new proposal to be printed in a timely manner, so the proposal is off the table.

Democrats and Senate Republicans have said averting a government shutdown that could hurt state employees and the economy was more important than passing a perfect budget.

Maryann Griffin, of Augusta, a technician with the state Department of Environmental Protection who said she has worked for the state for almost 30 years, said the shutdown was likely to hurt state employees the most because they fear for their paychecks. Attorneys for the Maine State Employees Association have said the state will face lawsuits if it fails to pay its employees on time.

"I'll be lucky if I can buy food," she said. "I'm one of those who's paycheck to paycheck."

U.S. Rep. Chellie Pingree, a Democrat, urged lawmakers to think of state workers, whose livelihoods are at stake.

"As families gather together to celebrate Independence Day, thousands of state employees across Maine are filled with anxiety and worry that they will not be able to make ends meet because obstructionist politics have prevented a common sense budget to pass in Augusta," she said.

The full effects of the shutdown haven't been felt by many yet because it's the weekend. State parks, correctional facilities and psychiatric hospitals remain open, and law enforcement and first responders are on the job. If the shutdown continues, bureau of motor vehicle offices would close, while at least one courthouse would be open in each county.

During the last shutdown, in 1991, a time of bleak revenues with no immediate sign of recovery, state employees flooded into the State House as citizens seeking services found shuttered motor vehicle offices, long waits to apply for food stamps and closed veterans' cemeteries.

This year, revenues are healthy, with unemployment at a historic low. The nonprofit advocacy group Maine Equal Justice Partners sued to ensure the state continues to pay benefits to low-income Mainers.

"This shutdown is about no core principle. This is all about the show," he said.