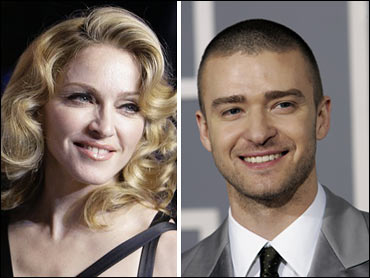 Madonna and Justin Timberlake are working together on her new album, her publicist, Liz Rosenberg, confirmed to The ShowBuzz on Wednesday.

Rosenberg said that the singers have been in the studio in London along with rapper-producer Timbaland. She said there was no firm release date for the album yet. According to reports, its due to be released in November.

Madonna has collaborated with other stars in the past, including Britney Spears (Timberlake's ex-girlfriend) and Grammy-winning DJ Stuart Price (aka Jacques Lu Cont).

Timbaland recently told Entertainment Weekly that he'd like to help Spears with her comeback album. He has collaborated with Timberlake and Nelly Furtado.

It was announced Tuesday that Madonna, along with the Beastie Boys and Black Eyed Peas, will headline the Live Earth concerts taking place at London's Wembley stadium this summer.

Madonna's last album was 2005's "Confessions on a Dance Floor."
By Amy Bonawitz

Meghann Fahy on "The White Lotus" finale
Thanks for reading CBS NEWS.
Create your free account or log in
for more features.
View CBS News In
CBS News App Open
Chrome Safari Continue
Be the first to know
Get browser notifications for breaking news, live events, and exclusive reporting.