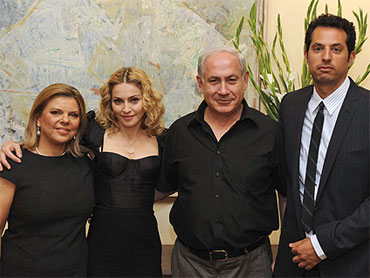 A statement from the prime minister's office says the singer spent two hours with Benjamin Netanyahu and his wife Sara at their home lighting candles and reciting a blessing together.

Although not Jewish, the 51-year-old pop star claims a special bond with Israel and Jewish tradition.

She's been exploring Kabbalah, a form of Jewish mysticism, for more than a decade and has taken the Hebrew name, Esther.

She arrived in Israel on Sunday and on Tuesday and Wednesday.

She was wearing a short-sleeved black dress as she left the heavily guarded Netanyahu home Friday.