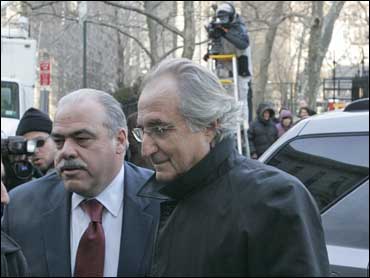 Prosecutors filed court papers Friday indicating Bernard Madoff may be ready to plead guilty to charges arising from one of the biggest financial frauds in history.

Madoff, 70, is scheduled for court twice next week, including a Tuesday appearance to waive any potential conflicts of interest involving his lawyer, and a Thursday morning arraignment. A defendant must enter a plea - guilty or not guilty - at an arraignment.

The U.S. attorney's office suggested Friday in a brief court filing that the money manager is ready to waive an indictment and one of Madoff's lawyers said he had already done so. A waiver of indictment is a necessary procedural step before a defendant enters a guilty plea.

Prosecutors have a deadline of next Friday to bring an indictment against Madoff under the speedy-trials law.

Madoff has been confined to his Manhattan penthouse since his arrest in early December after authorities said he told his family that he had engaged in a $50 billion fraud. Authorities have since said money lost by investors might be less than $17 billion and the higher amount may represent false profits.

"This probably means a plea deal and if that's the case we shouldn't at all be surprised," said CBS News legal analyst Andrew Cohen. "Madoff already settled the SEC case against him, he's never denied the core of the allegations against him, and he's got a wave of civil lawsuits coming his way once his criminal problems are resolved.

"There's no way to evaluate a plea deal until we know what its details are - whether Madoff is pleading guilty to something that would land him in jail, what sort of restitution is going to come back to the government and what sorts of facts will be conceded in advance of the civil lawsuits that are sure to follow," Cohen added.

"Any deal would have to be approved by a federal judge so even if and when the parties agree to some sort of settlement there is still an overcheck on the process," Cohen said.

Investigators have spent the last three months trying to untangle Madoff's complicated financial operation while attempting to return what is left of his assets to investors who lost billions. Madoff's cooperation could be key to explaining the mysteries and intricacies of his business, and also explain if others were involved in the fraud.

Daniel J. Horwitz, a Madoff defense lawyer, would only say "we've waived the right to indictment and the case will proceed by information."

Typically, a defendant is brought before a judge, waives indictment and enters a guilty plea the same day to a charging document known as an "information." It resembles an indictment but is brought by prosecutors rather than a grand jury.

Matthew Fishbein, a former chief of the criminal division in the federal prosecutor's office in Manhattan who is now in private practice, said a waiver of indictment is often followed quickly by a guilty plea but it does not have to be imminent.

"This seems to be a more complicated information and more back and forth going on. It may simply be that this basically buys them some time," he said.

Madoff already has surrendered rights to his business and any of the assets held by the business. A trustee overseeing his assets said he has identified nearly $1 billion in assets that are available to reimburse investors who have lost money.

Shortly after his arrest, Madoff offered to relinquish many of his and his wife's assets, including properties in Palm Beach, Fla., and Antibes, France, as well as his boats and cars, according to a Jan. 13 court filing signed by Horwitz and fellow defense attorney Ira Sorkin.

The deadline for victims of the Ponzi scheme to submit claims for compensation for their losses is July 2. How much money individuals can recover will be determined on a case-by-case basis, but one thing is certain: There is nowhere near enough money to go around, reports CBS News chief investigative correspondent Armen Keteyian.

At best, there appear to be about $5 billion in assets to cover an alleged $50 billion fraud. And that has left many victims with a bleak realization: their hope that the government will somehow recover their life saving is the only hope they have left.

Far beyond the Hollywood crowd and moneyed retreats of Palm Beach, Fla., the Madoff loss is most felt in places like a Fairfield, Conn., medical practice, where there's no cure for how sick folks feel.

"Never, never in a million years did I think that I would have nothing," said Linda Alexander, a billing specialist who scrimped and saved for 22 years to contribute to her retirement plan, putting away hundreds of thousands of dollars in all.