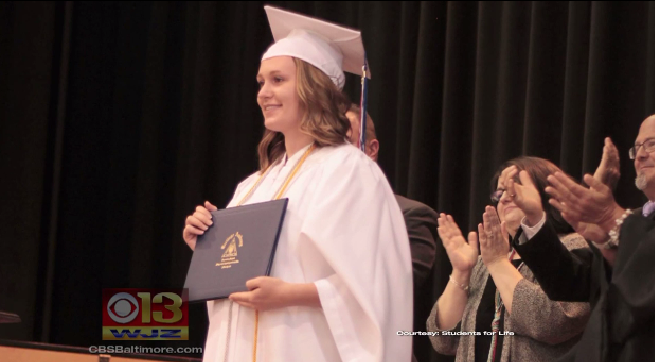 BALTIMORE -- A pregnant teenager who was barred from her graduation at a small Christian school was able to celebrate the occasion during a private ceremony.

CBS Baltimore reports that Maddie Runkles is a straight-A student, but her pregnancy has drawn scorn from her high school, Heritage Academy, which refused to allow her to walk with classmates in the graduation ceremony.

Over the weekend, Runkles received her diploma in a private ceremony at a local church. She was able to graduate among her family and friends.

"Even though it's not the way I thought I would graduate high school, and not what my family anticipated, it was special that we were able to have something separate with all of our family and friends," Runkles said. "So it was a very special day."

And to make things even better, Students for Life of America, an anti-abortion group, presented Runkles with a $16,000 scholarship. She also received 7,000 messages of support from people who heard her story.

"Our focus is on Maddie and this baby," said Sharon Runkles, Maddie's mother. "It has been all along, but now I feel like we can just get away from the drama of what was going to happen at graduation and now we can focus on Maddie and her baby."

Runkles is due to deliver her baby boy in the fall.