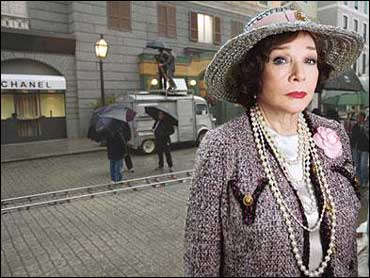 This story was written by CBSNews.com's Melissa Castellanos

"To be irreplaceable, you have to be different," Shirley MacLaine, portraying the legendary Gabrielle "Coco" Chanel, says in a line from the Lifetime original movie about the iconic French fashion designer which airs on Saturday, Sept. 13, at 8 p.m. ET/PT.

MacLaine, 74, portrays Chanel circa 1954, a fiery, defiant and ambitious woman who went from being an orphan on the outskirts of Paris to the top of the fashion world, creating her almost untouchable empire.

According to MacLaine, the legendary Audrey Hepburn, whom she acted alongside in "Children's Hour" (1961) suggested that one day she should consider playing Coco Chanel.

"She (Hepburn) was the best … truly, truly creative royalty. The best, the best," MacLaine told CBSNews.com.

Like Chanel, over the years MacLaine admits that she has taken on some of the designer's headstrong and hot-tempered qualities.

"Feistiness I think, a kind of high spirited irascibility possibly. Although I wasn't this irascible when I was in my 20's. It took a while to earn the right," she said.

MacLaine did some of her own research about Chanel, who died in 1971 at age 87.

"I found some very interesting videotapes on her. And believe me they are more kaleidoscopic shall we say, than just reading about her and so I played these tapes and went over and over them and they were unbelievably revealing," MacLaine said.

A self proclaimed Chanel knock-off wearer, MacLaine admits that she has never been one who focused on establishing a fashion sense.

"Me a fashionista, never! That (wearing Chanel knock-offs) doesn't make me a fashionista that makes me cheap! I couldn't afford Chanel and I don't know that I would pay for it now, but they have given me some of her clothes and I find them irresistible - no kidding - and the fabrics are extraordinary. I just like to mix all of her stuff together. You could sleep in her clothes," MacLaine gushed.

In the movie, Chanel learns to reinvent herself after 15 years of being out of the limelight. She reopens her couture fashion house and reveals her new collection, which isn't embraced by fashion critics or the public, who claim it lacks a modern feel.

Chanel doesn't handle rejection well and she strives to create a new collection.

MacLaine takes the audience on Chanel's professional and personal journey with the help of actress Barbora Bobulova, a native of Czechoslovakia, (now Slovakia) who plays the young Chanel and Golden Globe nominee Malcolm McDowell ("A Clockwork Orange," "Heroes") who plays her confidante and business partner.

"They were terrific and wonderful," MacLaine said.

Although MacLaine says that she is not really into fashion, she was bitten by the fashion bug and started up her own jewelry line.

"Coco Chanel inspired me to do this. I wanted to create a line of jewelry all of my life," MacLaine said.

MacLaine won an Oscar in 1983 for her work in "Terms of Endearment" and has been nominated five other times. She has also won an Emmy Award and seven Golden Globe Awards, including the Cecil B. DeMille Lifetime Achievement Award.

MacLaine's additional film credits include "The Apartment" with Jack Lemmon, "Steel Magnolias" with Julia Roberts, "Postcards from the Edge" with Meryl Streep, "In Her Shoes" with Cameron Diaz and Toni Collette, "Bewitched" with Nicole Kidman and Will Ferrell and "Rumor Has It" with Jennifer Aniston and Kevin Costner.