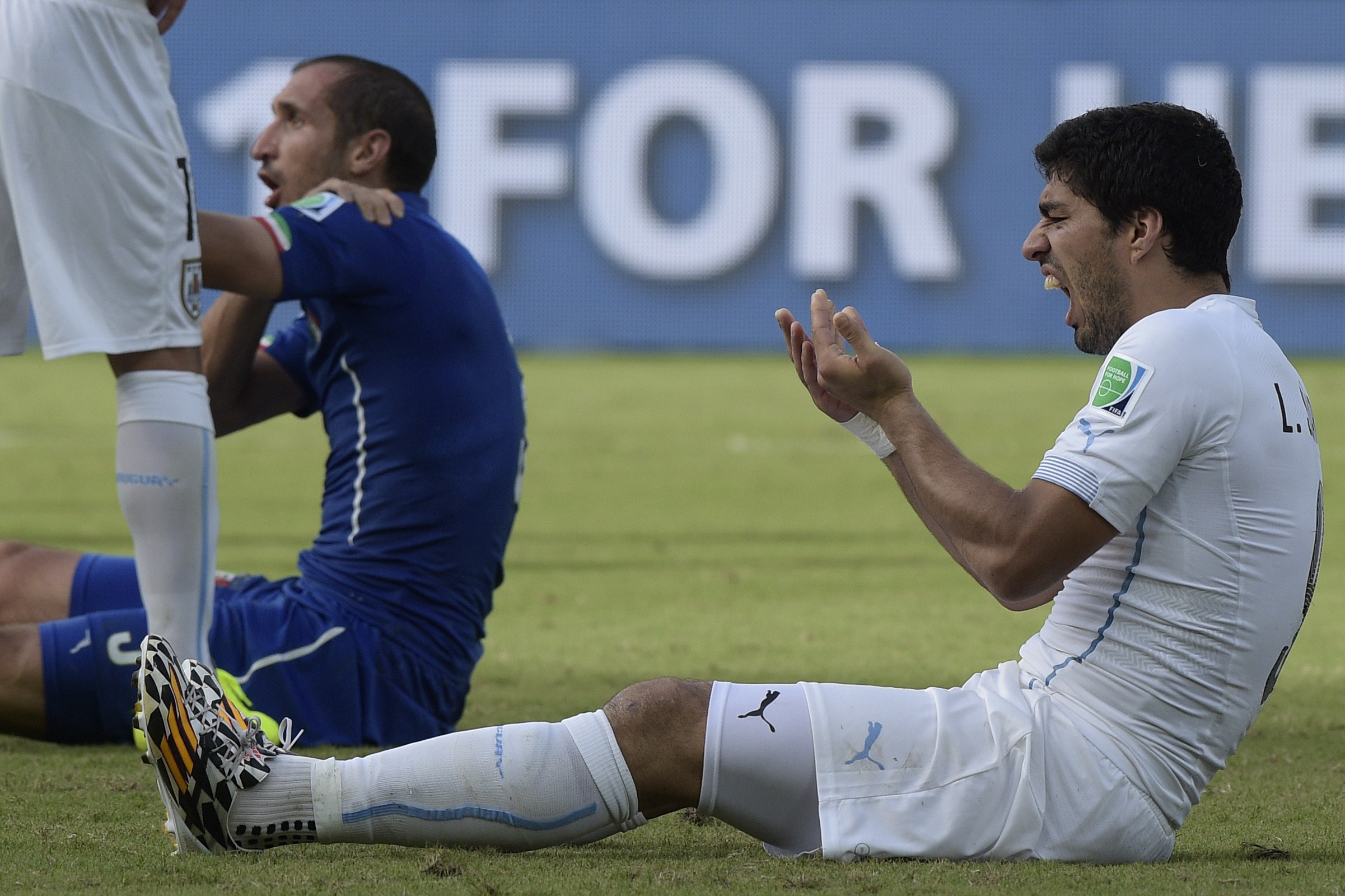 RIO DE JANEIRO -- FIFA banned Uruguay striker Luis Suarez from all football activities for four months on Thursday for biting an opponent at the World Cup, a punishment that rules him out of the rest of the tournament and the start of the upcoming Premier League season.

The ban also covers Uruguay's next nine international games, which goes beyond the next four months and rules him out of next year's Copa America. It will likely carry over to qualifying matches for the 2018 World Cup.

Uruguay's football federation said it plans an appeal to FIFA before the team's round-of-16 game against Colombia on Saturday in Rio de Janeiro.

Suarez bit the shoulder of Italy defender Giorgio Chiellini during Uruguay's 1-0 win in the group stage on Tuesday, but escaped unpunished as the referee did not see the incident. A replay of the bite can be seen starting at about the 1:10 mark of the video below:

"Such behavior cannot be tolerated on any football pitch and in particular not at a FIFA World Cup, when the eyes of millions of people are on the stars on the field," Claudio Sulser, chairman of the FIFA disciplinary committee, said in a statement.

"It feels like Uruguay has been thrown out of the World Cup," Valdez said in Rio.

Uruguayans of all stripes were nearly unanimous in their support of Suarez, calling the punishment excessive for what they felt was an act of immaturity.

Diego Suarez, the striker's youngest brother who is also a soccer player, called the sanction an "unbelievable" decision that has saddened him.

Juan Jose Monzillo, a fruit and vegetable vendor in Uruguay's capital of Montevideo, saw conspiracy behind the decision by soccer's governing body.

"They clearly wanted to kick Suarez out of the World Cup. Uruguay is a small country that eliminated two big nations like Italy and England and it doesn't benefit FIFA to let Uruguay continue playing," said Monzillo, 48, who listened to the news about Suarez on headphones as he tended his stand.

This is the third time Suarez has been banned for biting an opponent after similar incidents with Ajax in the Dutch league and Liverpool. He was given a 10-match ban by the Premier League for biting Chelsea defender Branislav Ivanovic in April 2013.

"Hopefully he will realize now that behavior of this type will not be tolerated under any circumstances," said FIFA vice president Jim Boyce of Northern Ireland.

In Uruguay, even fans who agreed Suarez's action was "stupid" did not agree with the sanction.

"Uruguay is a small country that eliminated two big nations like Italy and England and it's not for FIFA's benefit to let Uruguay continue playing," supporter Juan Jose Monzillo said in Montevideo.

By banning Suarez from all football activities, FIFA also prohibited Suarez from entering a stadium or team hotel at the World Cup. It also stops him from even training with Liverpool until the ban ends in late October.

"He cannot be actively involved" with a club, FIFA spokeswoman Delia Fischer said.

Suarez and the Uruguay football federation can appeal the sanctions, though Liverpool could not be formally involved in any legal challenge, Fischer said.

Suarez would still be allowed transfer to a different club during the ban, but would not be able to play for a new club until the sanction ends, Fischer said. He has been linked to a move to Barcelona.

Sports manufacturer adidas, which sponsors both Suarez and the World Cup, said it agreed with the ruling. The company said it will not use Suarez for "additional marketing" during the World Cup but would not immediately drop him as a client.

"We will again be reminding him of the high standards we expect from our players," adidas said in a statement.

In 2013, after Suarez bit Ivanovic, adidas released a statement with the exact same message but the company did not end its relationship with the player.

888poker, which signed up Suarez last month, said in a tweet that it was "reviewing" its relationship with the striker.

Any appeal by Uruguay must first go to the FIFA appeal committee, Fischer said. If rejected, Suarez and Uruguay could take the case to the Court of Arbitration for Sport in Lausanne, Switzerland.

At CAS, Suarez could first appeal to have the sanctions frozen during the process which would clear him to return early for Liverpool.

In a statement, Liverpool chief executive Ian Ayre said the club "will wait until we have seen and had time to review the FIFA Disciplinary Committee report before making any further comment."