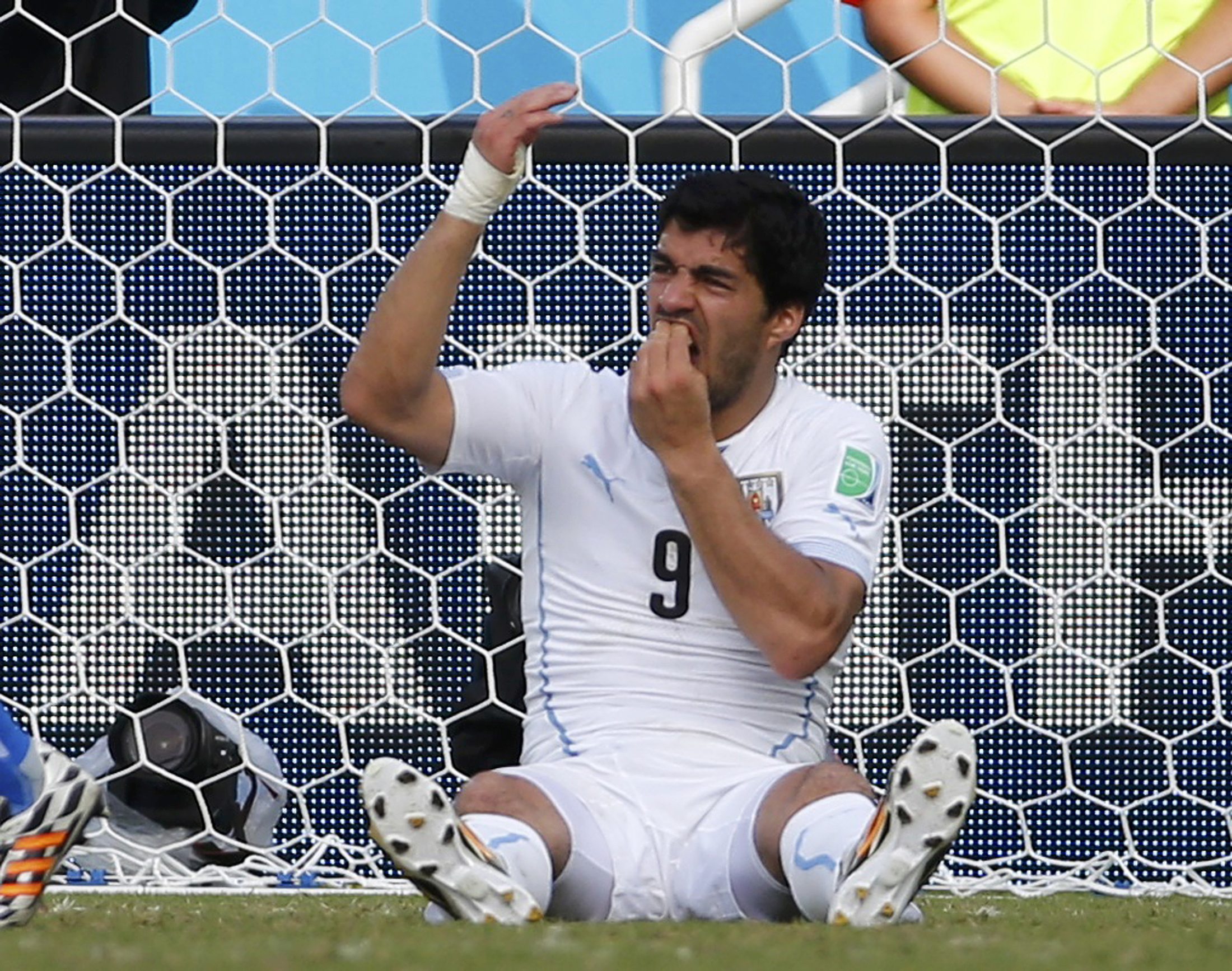 NATAL, Brazil -- Biting opponents, racist comments -- all that looked to be behind Luis Suarez, as soccer's bad boy was maturing into a star for his club and country. Then, the old habit that most people leave behind in nursery school cropped up again in front of an audience of millions.

Faced with a smothering and frustrating Italian defense in a must-win World Cup game Tuesday, the Uruguayan superstar responded with his front teeth.

It came at about the 80th minute when Suarez and Italian defender Giorgio Chiellini got tangled up in front of Italy's goal. The apparent chomp happened in an instant, but was caught by television cameras and became a worldwide sensation -- and could lead to Suarez being kicked out of the World Cup.

The referee didn't see a bite, and no foul was called despite Chiellini pleading and pulling down his jersey to show a red mark on his shoulder.

About a minute later, Uruguay scored the winning goal in a 1-0 game that sent Italy home.

Uruguay will continue playing, but the federation that runs the World Cup will investigate and may suspend Suarez, who has twice before been disciplined for biting opponents in league games.

FIFA officially announced an investigation early Wednesday, saying the Urguayans had until late the next afternoon to present evidence. A ruling will be announced before Uruguay plays Colombia on Saturday.

Suarez didn't confirm or deny the bite, but said he was angry that Chiellini - one of the best defenders in the world and known for his physical play - had hit him in the eye during the game.

Suarez, 27, should be celebrating a career year. After asking to be sold before the season, he stayed with Liverpool, won the scoring title and was named English Premier League's player of the year.

Now, he'll have to try to start rehabbing his reputation again.

"I want to say that if he's attacked, as it has begun in this press conference, we'll also defend him, because this is a football World Cup, not of cheap morality," said Tabarez, who said he didn't see a bite.

Suarez was suspended following biting incidents in the Netherlands in 2010 and in England in 2013. He also was suspended for racially abusing an opponent. British tabloids have teasingly called him a vampire, and social media artists have had fun manipulating his photo into images of Dracula and Hannibal Lecter.

And he was responsible for one of the most talked-about moments of the 2010 World Cup, when he purposefully used his hand to prevent a Ghana goal near the end of the quarterfinals. Suarez received a red card and was banned for the next game, but Ghana missed the penalty kick and was eliminated.

Uruguay defender and team captain Diego Lugano suggested Suarez was a victim of his past.

"You need to show me because I didn't see anything. Did you see it today or did you see what happened in other years?" Lugano said. "The worst of all was Chiellini's attitude ... as sportsmen leaving the field, crying and appealing against a rival."

On the field immediately after the match, Suarez looked relieved to have pulled out the victory in the heat of this tropical coastal city. If Uruguay had lost, it would have been knocked out of the World Cup

After taking off his jersey, Suarez walked to a corner of the stadium, clapped and flashed his toothy smile as he waved to the thousands of Uruguay fans chanting and cheering his name.

FIFA, soccer's world governing body, can sanction players with bans of up to two years. FIFA had no immediate comment.

FIFA Vice President Jim Boyle said on British television that Suarez had let himself down again.

"There is no doubt Luis Suarez is a fantastic footballer but, once again, his actions have left him open to severe criticism," Boyle, who is also chairman of the FIFA referees' committee, said from his home in Northern Ireland. "FIFA must investigate the incident seriously."

Chiellini said Suarez should have been kicked out of the game.

"Not sending off Suarez (was) ridiculous," Chiellini said. "It was absolutely clear. There's even a mark."

Suarez's status for the World Cup had been in doubt after he had left knee surgery just a month before it started. He missed Uruguay's 3-1 opening loss to Costa Rica, but returned with a flourish to rescue Uruguay with both goals in a 2-1 win over England.

After the victory, he claimed vengeance against some of the British media he accused of treating him badly.

This was supposed to be the World Cup where Suarez repaired his reputation. He tried to rebrand himself as a family man after the birth of his two children, a son and daughter.

Suarez said he regretted his previous biting incidents, telling the Mirror newspaper in London recently that he worried what his children will think.

"That thought almost hurts me more than the actual deed. The fact, as well, that I will have to explain one day to my kids that it was me, their father," Suarez said. "That has kept me awake at night many times ... I want to be a father they can be proud of."