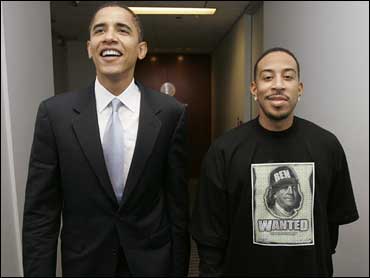 Ludacris' new song, "Politics as Usual," may have cost him one of his biggest fans, Democratic presidential hopeful Barack Obama.

And for good reason: It points up the dilemma facing the nation's potential first black president, who wants the support of the influential hip-hop community but needs to steer clear of the controversy so commonly associated with its music.

Ludacris' "Politics as Usual" alludes to an imminent victory for Obama by handing out major put-downs to his rivals. It dismisses Hillary Rodham Clinton as a vice presidential candidate - "that (expletive) is irrelevant"- and says presumed Republican nominee John McCain doesn't belong in "any chair unless he's paralyzed."

Obama, who has said he is a Ludacris fan, was quick to distance himself Wednesday.

"While Ludacris is a talented individual, he should be ashamed of these lyrics," Obama campaign spokesman Bill Burton said in an e-mail statement. He also called the song "outrageously offensive."

Calls to Ludacris' publicist and manager were not immediately returned Thursday.

That Obama's one-time praise for Ludacris has turned to scorn really is politics as usual, said John McWhorter, a senior fellow at the Manhattan Institute, a conservative think tank, and author of "All About the Beat: Why Hip-Hop Can't Save Black America."

Photos: Celebs On The Campaign Trail

"Of course, Obama and his people have to condemn the rap, because it does say some vulgar things," he said. "If you're running for president, you're supposed to be an upstanding individual."

While hip-hop fans are expected to be a factor in the November election, the song is not.

"Hip-hoppers and black folks understand the game," said Jeff Johnson, an activist and host of an upcoming news and public affairs show on Black Entertainment Television. "They're thinking, 'An Obama who knows how to play the game is still better for me than a McCain."'

"There are a ton of people who clearly are looking for (Obama) to denounce this in order to continue to view him as credible," Johnson said. "He, for political purposes, has to separate himself from anything controversially black."

During the Democratic primary, Obama was bolstered by the black vote, and he has pledged to boost black participation by 30 percent in November - potentially adding nearly 2 million votes in 11 Southern states, enough to tip the balance in several states that have been solidly Republican.

The hip-hop generation stands poised to help him meet his goal.

Last week, the nonpartisan group Hip-Hop Caucus and hip-hop star T.I. launched the "Respect My Vote" campaign. The group conservatively estimates they will register 75,000 voters on the ground and 150,000 on the Internet, focusing mainly on those between the ages of 18 and 29 who are not on college campuses.

In March, hip-hop mogul Russell Simmons endorsed Obama. The group estimates that the hip-hop generation will be nearly 50 million strong this year - representing nearly a third of the electorate. (Simmons has temporarily stepped aside as chair of the New York-based Hip-Hop Summit Action Network, which is nonpartisan, until after the election.)

McWhorter, who is an Obama supporter, said the song - and Obama's reaction to it - should come as no surprise. Rappers are supposed to be clever and confrontational, which is why the song is not likely to be on voters' minds this fall.

"I'm not aware of hip-hop music affecting any election so far, and I don't think that this is going to be one, either," McWhorter said.

Obama has spoken out against some of hip-hop's stars before, but praised Ludacris and hip-hop icon Jay-Z as "great talents and great businessmen" in a recent Rolling Stone interview.

"There's no doubt that hip-hop culture moves our young people powerfully. And some of it is not just a reflection of reality," he told Vibe magazine last August. "It also creates reality. I think that if all our kids see is a glorification of materialism and bling and casual sex and kids are never seeing themselves reflected as hitting the books and being responsible and delaying gratification, then they are getting an unrealistic picture of what the world is like."

Some may remember what has happened when a politician has stepped into such critical territory before.

In 1992, then-Democratic presidential candidate Bill Clinton accused the hip-hop artist Sister Souljah of inciting violence against whites. Some black leaders criticized Clinton, but by staying above the fray, he galvanized his image as a politician who refused to pander.

Then again, Obama also has appeared to have embraced some of hip-hop's cultural touchstones.

During the primaries, hip-hoppers cheered Obama's brush of the shoulder at one campaign appearance - a subtle reference Jay-Z - and again when he and wife, Michelle, shared a fist bump on the night in June when he became the apparent Democratic nominee for president. Both were silent nods to the black community, and especially the hip-hop generation.

Bakari Kitwana, who co-edited the upcoming "Let's Get Free: Strategies for Organizing the Hip-Hop Voting Bloc" with Johnson, said the hip-hop community's celebration over Obama's candidacy highlights a "disturbing reality" for some as artists like Ludacris become emboldened.

"Before, a lot of the songs about Barack were supporting his campaign," Kitwana said. "This song is different in that it almost claims the victory. That's scary for some people who don't want to see that happen."

For young voters, the controversy could pull them deeper into the mire of mainstream electoral politics, Kitwana said, causing them to look more critically at the process. But many aren't even engaged in such conversations, said Johnson.

"There is a community of people who aren't watching CNN or reading The Huffington Post," Johnson said. "The question is, 'Does this hurt him with who?"'