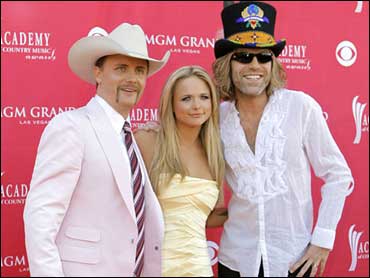 The other half of the Nashville duo Big and Rich, the singer-songwriter has penned lyrics for a rock-infused anthem focused on the 5 1/2 years Republican presidential candidate John McCain spent as a prisoner of war in Vietnam and his refusal of an early release.

"He stayed strong, stayed extra long til they let all the other boys out. Now we've got a real man with an American plan, we're going to put him in the big White House," the song says. Its refrain: "We're all just raising McCain."

Rich planned to debut "Raising McCain'' on Friday at the Country First concert in Panama City, Fla., with McCain on hand.

In an interview, Rich said he finished the song about a month ago and sent it to McCain's daughter, Meghan, who sent it to campaign officials.

"I wanted to offer him something that he didn't have, a rally song, one that really captures that maverick spirit," Rich said.

Photos: Celebs On The Campaign Trail

Rich said McCain's Vietnam experience motivated him to compose the song, which he planned to offer on his Web site without charge.

"This guy is a hero," Rich said. "He was physically tortured for years, and yet he gets out of bed every day and serves our country for decades."

Earlier this year, will.i.am of the Black Eyed Peas composed a song for Obama, "Yes We Can," and enlisted celebrities like actress Scarlett Johansson and singer John Legend to perform and sing. The song became an online sensation, drawing more than 8 million hits on YouTube alone.

Rich said that while he admired Obama and was "proud as an American" that a black candidate was on the verge of winning the Democratic nomination, he disagreed with the Illinois senator on most major issues and felt he didn't have enough experience to be president.

"The entire world is looking for a way to sucker punch us," Rich said. "National security is absolutely at the top of the list of issues. That's why I think John McCain is the guy to keep us safe."

Rich had supported fellow Tennessean and Republican Fred Thompson, before Thompson dropped from the presidential race. Rich performed at a campaign event for Thompson last September, telling the crowd that "country music in general is behind Fred Thompson for president."

During a talk radio appearance in Nashville to support Thompson, Rich compared legalizing gay marriage to legalizing incestuous relationships. He later apologized, saying the remarks didn't "reflect my full views on the broader issues regarding tolerance and the treatment of gays and lesbians in our society."