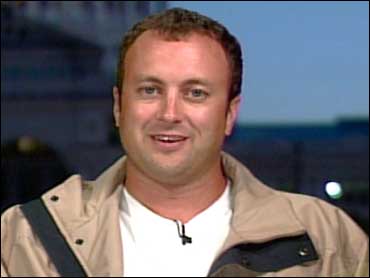 Dirk Hoekstra's newly refitted boat, which once belonged to his dad, is in shambles, but the Austin, Texas, man doesn't mind. He told CBS News he thinks he's lucky to just be alive.

Hoekstra and a female friend were boating in Austin, Texas, Monday when when the floodgates to the nearby Tom Miller Dam opened.

The boat was drawn to the grinding waters by the gate, as horrified onlookers watched from a nearby outdoor restaurant. Security guards managed to rescue Hoekstra's friend by getting a rope to her.

But Hoekstra fell into the water, and he and his boat were sucked under the dam, where he was violently thrashed about, plunging almost 60 feet.

All of this was

The boat was smashed to pieces, but somehow, Hoekstra survived.

told The Early Show co-anchor Harry Smith
Thursday that he and friend Monica Barnes were out on the boat "pretty much all day" and had no problems.

Ironically, Hoekstra says, he had "just revamped this old '68 boat of mine, a boat my dad built. And I recovered it, and everything was brand new, tiptop shape."

As he was approaching the dock to load the boat onto a trailer, "They had the dam open, and the current was so strong with the northwest wind it just -- we threw out anchor and were waiting for our trailer to pull up," and the current pulled the boat toward the dam.

Hoekstra says the boat's motor had been working, but he turned it off while they were anchored and, "When I went to turn the motor back on, it was dead."

Asked by Smith what he was thinking as the boat drifted toward the dam, he quipped, "This motor better start working really fast!

"Then I tried to put on an electric motor really fast," but there wasn't time. "We crossed the danger buoys. I couldn't grab them. I missed them by five feet, and I basically tried to get us alongside the floodgates on the opposite side, but it ended up whipping us around and slamming the back of the boat into the gate."

By then, onlookers had sent help, and rescuers got Barnes to safety.

But Hoekstra was still very much in trouble, and soon, in the soup, and his boat, a goner.

Smith wondered whether Hoekstra thought the end was at hand as he got sucked under the dam, and Hoekstra deadpanned, "Yeah, that crossed my mind.

"Luckily, I got a good deep breath before I went down and rolled with the turbulence as well as I could. My clothes started flying off. I kept my shorts on down by my ankles as long as possible, and it just finally started thrashing me around until the next -- you know, I was pretty much out of breath, and I finally got to the surface, and I was literally a quarter mile down from the dam."

What followed could have come straight out of a comedy movie.

Hoekstra crawled out of the water with almost no clothes on, walked up to someone's back door, and used a kiddy pool to cover himself as best he could.

"A very nice lady, obviously, was baby-sitting some children. She had young children of her own, and here I am, this dripping wet man, standing there in front of her door with a pool, and I told her the situation and said. 'I think my friend might be dead in the river, I need to call 911. We had a serious accident, Can I use your phone?' She was very kind and took very nice care of me and waited for the EMS to get there."