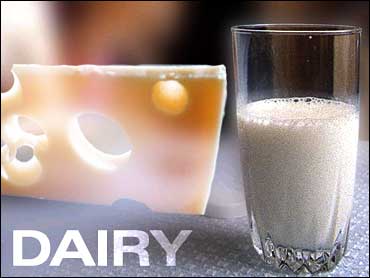 Each additional serving of low-fat dairy per day resulted in a 9 percent drop in risk. The link could be due to whey proteins or magnesium, ingredients thought to enhance the action of insulin in regulating blood sugar.

But those ingredients are contained in high-fat dairy products, too, so researchers said they don't really know what caused the drop in risk. They cautioned against making major changes in diet based on the study.

Eating dairy could be associated with some hidden factor the healthier men shared that was reducing their risk of diabetes, said Dr. Frank Hu of the Harvard School of Public Health, one of the study's authors.

"There are many other ways to prevent diabetes risk," he said. "Eating high-fiber foods and nuts, and reducing sugar, sweets and beverages. Exercise has been shown to be beneficial."

Researchers relied on questionnaires filled out by 41,254 male health professionals in an ongoing Harvard study. The men did not have diabetes when the study began, but more than 1,200 developed it during the years they were followed.

In an accompanying editorial, Janet King a researcher at Children's Hospital Oakland Research Institute cautioned that milk appears to increase the risk of prostate cancer and, in certain children, Type 1 diabetes.

Type 1, once called juvenile diabetes, is caused by the body's inability to produce insulin. Type 2, the most common form of diabetes, can result from overweight, inactivity and poor diet.

King also said milk can be part of a diet that lowers blood pressure and has been linked to a lower risk of colorectal cancer.