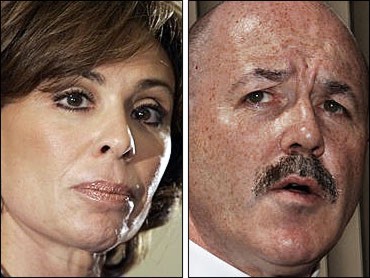 Pirro suspected her husband, Albert Pirro, of having an affair and contacted Kerik, now a private security consultant, in the middle of 2005 to discuss possibly placing a tape recorder on a boat owned by the couple.

What neither Pirro nor Kerik knew was that their conversations were being tape recorded by the Bronx district attorney's office, which was conducting an unrelated investigation of Kerik. The tapes were turned over to federal authorities, who began their own investigation into the bugging scheme.

Pirro, seeking to become the state's first female attorney general, said she was told of the investigation by FBI agents last week. She held a news conference Wednesday to proclaim her innocence.

"Sometime last year, I came to believe that my husband was seeing another woman. I was angry and had him followed to see if what I suspected was true," she said in the statement. "Although I spoke about taping him, there was no wiretapping by me of anyone. There was anger and frustration, and nothing more."

Husband Albert Pirro is a millionaire lobbyist who served 11 months in federal prison after being convicted on tax fraud charges in 2000. He also embarrassed his wife by fathering an illegitimate daughter after they were married.

Kerik also has a troubled past. President Bush nominated Kerik to become the chief of the Homeland Security Department, but a series of embarrassing disclosures torpedoed his candidacy.

There were reports that during his 18-month tenure as police commissioner he had simultaneous extramarital affairs with two women, including the publisher of his memoir. The reported affairs took place in a luxury apartment overlooking the ruins of the World Trade Center.

And Kerik pleaded guilty three months ago to accepting tens of thousands of dollars in gifts from a New Jersey firm accused of having mob connections. He was a close confidante of former New York Mayor Rudolph Giuliani, but left Giuliani's business, Giuliani Partners, after withdrawing as Mr. Bush's Homeland Security nominee.

Kerik lawyer Joseph Tacopina confirmed Kerik's role in the matter but said he had become involved through a long friendship with Pirro.