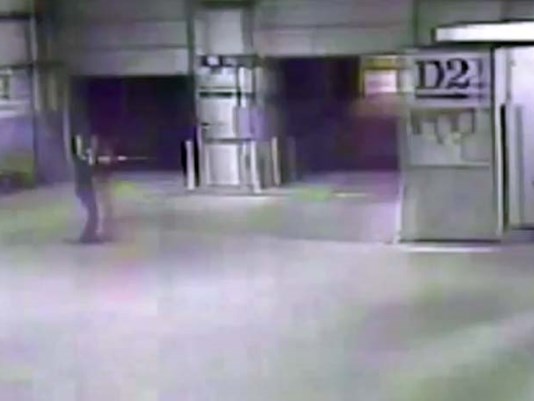 GRETNA, La. -- A Louisiana sheriff on Wednesday called his deputy "one of the luckiest men in America" after a suspect's weapon malfunctioned as he pointed it at the officer.

In a news conference Wednesday, Jefferson Parish Sheriff Newell Normand said his deputy could easily have been killed in a confrontation with a 17-year-old theft suspect late Tuesday. Normand compared the encounter between his deputy and Devon Martes to an "O.K. Corral shootout."

Surveillance video captured the fatal shooting and shows Martes pointing what appears to be a gun at a sheriff's deputy inside a warehouse of The Times-Picayune newspaper in a suburb of New Orleans. The video is somewhat blurry, but appears to show the suspect twice raising a gun before being shot.

Normand said the shooting happened as deputies responded to calls just before midnight Tuesday of suspicious activity on the Interstate 10 service road in Metairie, near a new car storage lot. He said the callers reported seeing two people rolling tires down the street.

Normand said deputies flooded the area and that Dalton pursued Martes into the newspaper warehouse. Inside the warehouse, the deputy and suspect met, he said. Martes raised his gun to shoot Dalton and the gun did not fire, the sheriff said.

"But for the fact that the gun malfunctioned, I might have a dead officer," Normand said. "He was going to act out as a cold-blooded killer."

Dalton drew his service weapon and fired six shots at Martes, he said. The suspect was pronounced dead on the scene. Dalton is white and Martes was black.

Normand said the suspect was armed with a 9 mm handgun and the weapon was on display at the news conference. Normand said Martes, of Metairie, had a long criminal record.

"My deputy is one of the luckiest men in America this morning," Normand said. It was, he said, "very much the shootout at the O.K. Corral."

Normand added that a split-second decision by his deputy on which way to go inside the warehouse also helped save his life. If not for that, the sheriff said Martes might have been able to shoot his deputy in the back.

The sheriff said the other suspect remained at large Wednesday.

This has been a difficult year for the Jefferson Parish sheriff's office. On June 22, David Michel Jr., a nine-year veteran, was killed after he was shot three times during a pedestrian stop. In January, another deputy, Stephen Arnold, was shot during a drug raid at a home in the Lower 9th Ward neighborhood of New Orleans.

Normand said the encounter between Dalton and Martes illustrated why officers are "on edge."

He warned that a growing number of guns have been seized by law enforcement in the parish, which makes up a large portion of the suburban area of metropolitan New Orleans.