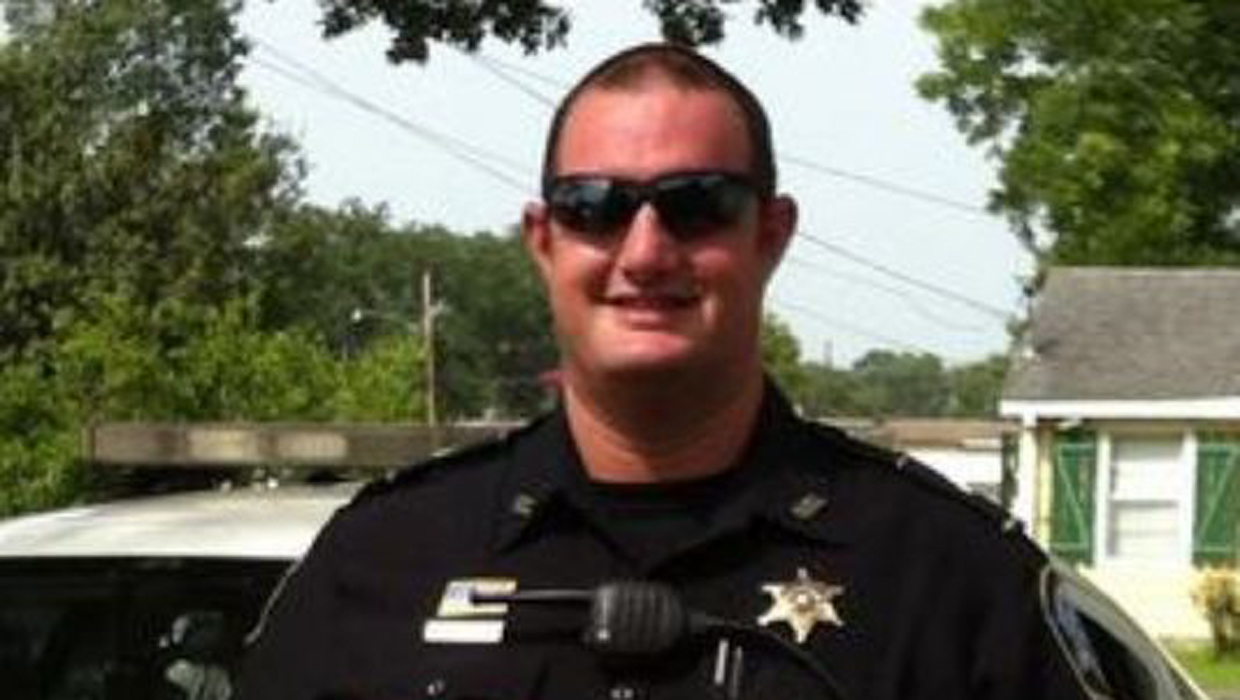 LULING, La. -- In what authorities call an apparent ambush by an angry motorist, a south Louisiana sheriff's deputy was shot three times Thursday, sustaining injuries to his eye and chest in a gunfight that broke out at a school traffic zone.

St. Charles Parish Sheriff Greg Champagne identified the suspect as John Paul Devillier, 58, currently of Gulfport, Mississippi. Champagne said Devillier had been fired from the Transportation Safety Administration approximately two years ago but had no details.

The wounded deputy, Cpl. Burt Hazeltine, 36, is a married father of four. He was in stable but guarded condition at a New Orleans hospital Thursday evening. He was hit in the elbow and the chest and one bullet was lodged behind his left eye, Champagne said.

Champagne said that Hazeltine would likely lose sight in his eye, though he was to undergo emergency surgery Thursday night in an effort to save his sight, CBS affiliate WWL-TV reports.

The shooting happened on busy U.S. Highway 90 in the town of Paradis, about 25 miles west of New Orleans.

During a news conference and interviews at the Sheriff's Office in nearby Luling, Champagne and Capt. Patrick Yoes said details of what led to the shooting remain unclear. As of Thursday afternoon, they believe that Devillier had been stuck in heavy traffic, unable to make a left turn on Highway 90. Hazeltine was in his marked unit at an intersection where deputies routinely help route school buses to nearby schools during rush hour.

Devillier is believed to have shouted angrily at Hazeltine before driving away. Yoes said Devillier then called the sheriff's office.

"He demanded someone come out there and speak to him," Yoes said.

Devillier then returned to the intersection, parking in a convenience store. Hazeltine approached the vehicle, saw a handgun on the dashboard and drew his own weapon.

Yoes said Devillier is alleged to have dangled the handgun out the driver's side window with one hand, apparently trying to lull Hazeltine into believing he would not fire. But, according to Yoes, Devillier also had a gun in his right hand. He allegedly fired through the windshield of the truck.

Hazeltine returned fire. Yoes and Champagne said two other vehicles were hit but nobody else was injured. Other deputies arrived quickly, summoned by Hazeltine and others on the busy highway.

One factor that may have been a factor in Hazeltine's survival: "Ironically, our training academy is just a few minutes away," Yoes said. "We had a full crew there that was actually training on survival of police shooting trauma and how to respond to that. We actually had a trauma surgeon who arrived there - pretty much everybody at the academy arrived just within minutes."

Two deputies confronted Devillier. "He threw his weapons out of the vehicle but he still continued to resist physically. We had to remove him from the vehicle and they actually wrestled with him in a big drainage ditch."