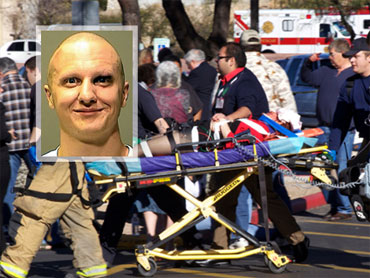 TUCSON, Ariz. - A wildlife officer pulled over the suspect in the assassination attempt against an Arizona congresswoman less than three hours before the deadly attack, authorities said Wednesday as they pieced together more details of a frenzied morning.

Jared Lougher, 22, ran a red light but was let off with a warning at 7:30 a.m. Saturday, the Arizona Game and Fish Department said. The officer took Loughner's driver's license and vehicle registration information but found no outstanding warrants on Loughner or his vehicle.

Wildlife officers have full authority to make traffic stops, although they usually don't do so unless public safety is at risk, the department said in a news release.

Jim Paxon, chief information officer for Arizona Game and Fish told CBS News that the stop took place at Interstate 10 and an unnamed cross street, "several miles" from the Safeway store where the shootings took place.

This detail is the latest in a series of snapshots emerging about the final hours before Loughner allegedly opened fire with a semi-automatic Glock handgun in a crowded Tucson Safeway parking lot.

Six people remain in the hospital from the shooting, CBS News Correspondent Ben Tracy reports. Doctors said U.S. Rep. Gabrielle Giffords, who underwent brain surgery after being shot in the head during Saturday's rampage, continues to improve and is now less sedated. At Giffords' Tucson office, staffers continue her work while a memorial grows out front.

"We all live here," Tucsonan Michelle McIntyre told CBS News. "We all have to get along, and we all just have to just deal with it."

The night before the shooting, Friday, Jan. 7, Loughner slept at an area motel. He apparently drove to the motel in the Chevy Nova now parked at the Loughner home. Police have since searched the vehicle thoroughly.

At 2:33 a.m. Saturday, Loughner visited a convenience store less than a mile from his house, CBS News reports. Alone, he bought a doughnut, a soft drink and several energy bars. He did not buy alcohol.

Surveillance video of Loughner at the Catalina Mart has been given to the FBI, which wanted the video to see if he had any accomplices, CBS News reports. The FBI scanned Loughner's credit card purchases to track his whereabouts before the shooting.

The morning of the shooting, Loughner went to two WalMart stores to buy ammunition. He left the first store because the clerk was too slow. He bought the ammo at the second store.

Either right before or right after buying the ammo, Loughner was pulled over for running a red light and released, in the earlier described incident.

After being pulled over, Loughner went home and had a confrontation with his father, Randy Loughner.

Loughner ran into the desert from his angry father, who was chasing his son after seeing him remove a black bag from the trunk of a family car, said Rick Kastigar, chief of the Pima County Sheriffs Department's investigations bureau. Randy Loughner had apparently asked after the bag, and his son then fled. Investigators are still searching for the bag.

After the run-in with his dad, he took a cab from a convenience store to the Safeway.

The suspect was "moving around quite a bit, going from location to location," the morning of the shooting, the FBI said recently, as they continue to develop a time line of the suspects movements prior to the shooting and the weeks and months before as well.

The sheriff's deputies who swarmed the Loughners' house removed what they describe as evidence Loughner was targeting Giffords. Among the handwritten notes was one with the words "Die, bitch," which authorities told The Associated Press they believe was a reference to Giffords.

In addition to the new details about the hours before the shooting, interviews with those who knew Loughner or his family painted a picture of a young loner who tried to fit in, but was increasingly troubled.