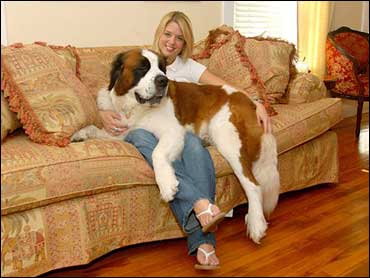 A custody dispute over two dogs lost in Hurricane Katrina ended Tuesday when the Florida women who adopted them after the storm agreed to give them back.

"This is what we wanted from the beginning, our dogs being back home," Doreen Couture said at an emotional news conference.

She, her husband, Steve, and their two children lived in St. Bernard Parish, La., when they lost almost everything they had in the storm in 2005. They had dropped off their dogs at a temporary shelter before fleeing.

They didn't immediately reclaim them, and in the chaos that followed, the animals — a St. Bernard and a shepherd mix — ended up at a shelter in Pinellas County, Fla. They were adopted into two different homes.

The Coutures eventually learned where the dogs were and sued last year to have them returned. The new owners claimed they adopted the dogs in good faith and vowed to fight. A trial date had been set for this July.

On Tuesday, Pam Bondi, a local prosecutor who adopted the St. Bernard, said she decided to give him back after getting to know the Coutures and visiting them in Louisiana.

Bondi said Rhonda Rineker, the Dunedin woman who adopted the shepherd mix, also agreed to return her dog to the Coutures. Rineker has not commented publicly on the dispute.

A tearful Bondi said she would be able to visit the dog she called Noah and the Coutures call Master Tank.

"Thanks to these good people, I will be a big part of his life. ... I promised to love and protect him and keep him safe his entire life, and that's what I plan on doing," Bondi said.

She had said she spent thousands of dollars for the dog's health problems that predated the storm, while the Coutures denied that his health had been neglected.

Steve Couture said the family, now living in St. Tammany Parish, planned to pick up the dogs later Tuesday and then head back to Louisiana.