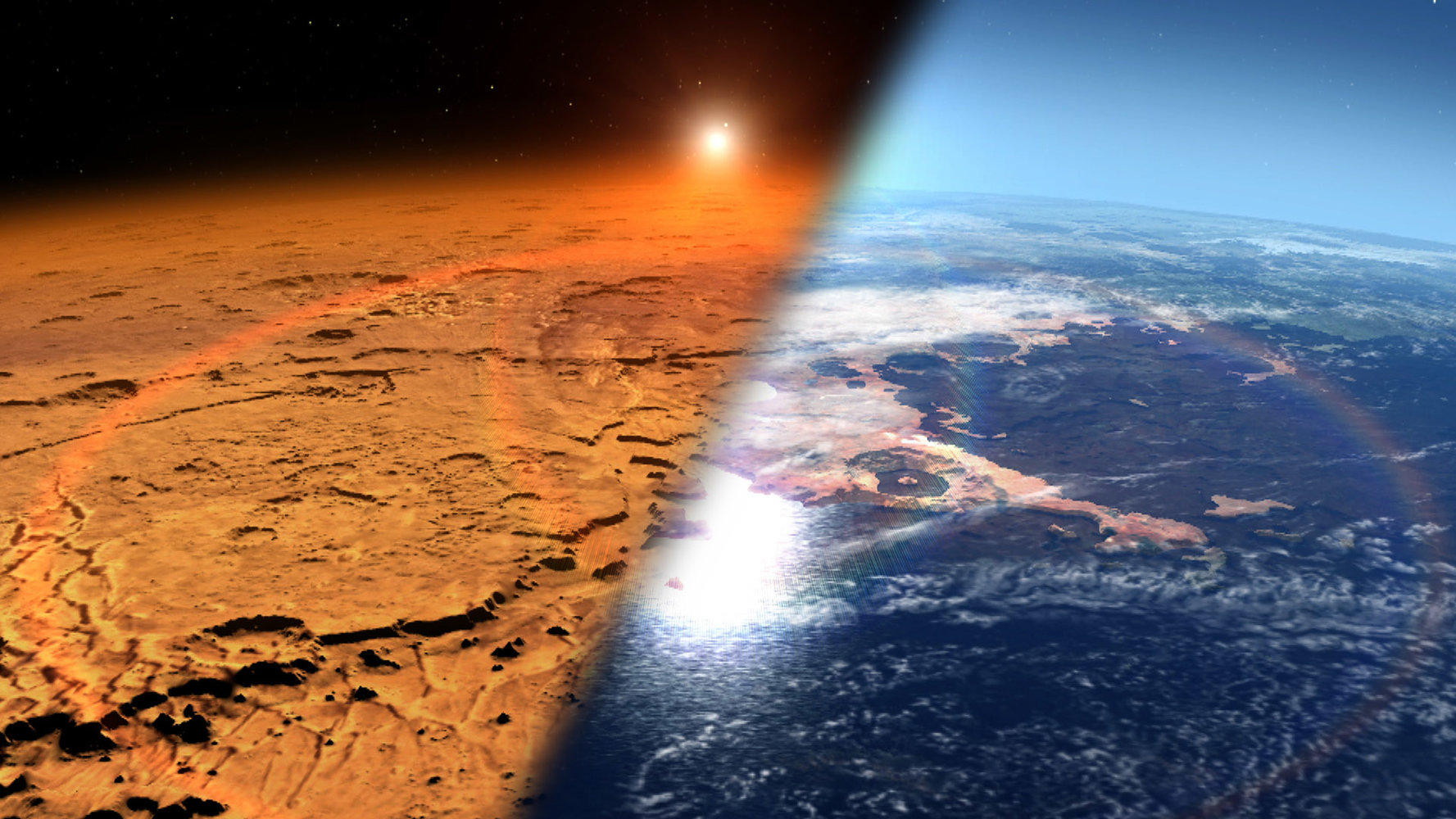 Mars may have once possessed an atmosphere about as thick as Earth’s, but then lost most of it to space due to solar wind and ultraviolet rays, a new study found.

The new finding could shed light on the habitability of not just early Mars, but also distant worlds, researchers said.

Mars is currently a frigid desert world with extremely thin air. The atmospheric pressure on the Martian surface is on average only about one-hundredth to one-thousandth that on Earth at sea level. (In comparison, the atmospheric pressure at the highest point on Earth’s surface, the top of Mount Everest, is about one-third that on Earth at sea level.) [The Search for Water on Mars in Pictures]

In the thin air of Mars, water easily boils. Still, previous research has unearthed ample evidence that Mars was once covered in water, with features resembling dry riverbeds and minerals that could have formed only in the presence of water. This suggests that the Martian atmosphere was once much thicker than it is today, with seas that could have supported life billions of years ago.

To learn more about how the atmosphere of Mars has changed over time, scientists in the new study analyzed data from NASA’s Mars Atmosphere and Volatile Evolution (MAVEN) mission. They focused on argon, a gas that almost never chemically reacts with other elements.

The researchers examined two different isotopes of argon: the lighter argon-36 and the heavier argon-38. Each isotope of an element has different numbers of neutrons; for instance, argon-36 possesses 18 neutrons in its nucleus, while argon-38 has 20.

Argon-36 is more plentiful than its heavier counterpart, argon-38, at higher altitudes. This makes the lighter isotope more susceptible to getting stripped from the atmosphere by solar ultraviolet rays and by high-energy winds composed of particles from the sun.

The concentrations of the two argon isotopes at different heights in the Martian atmosphere suggest that 66 percent of Mars’ argon has disappeared from there since the Red Planet formed, the researchers said. “The escape of gas to space might have played a major role, if not the major role, in changing the climate of Mars over time,” said study lead author Bruce Jakosky, a planetary scientist at the University of Colorado Boulder.

Carbon dioxide is a “greenhouse gas,” meaning it traps heat and can help warm planets. The loss of this carbon dioxide from the Red Planet may “tell us why the surface of Mars could have gone from habitable in ancient times to not being able to support life today,” Jakosky told Space.com.

In addition, “we’ve identified a set of processes that might tell us more in general about the habitability of planets around other stars,” he said.