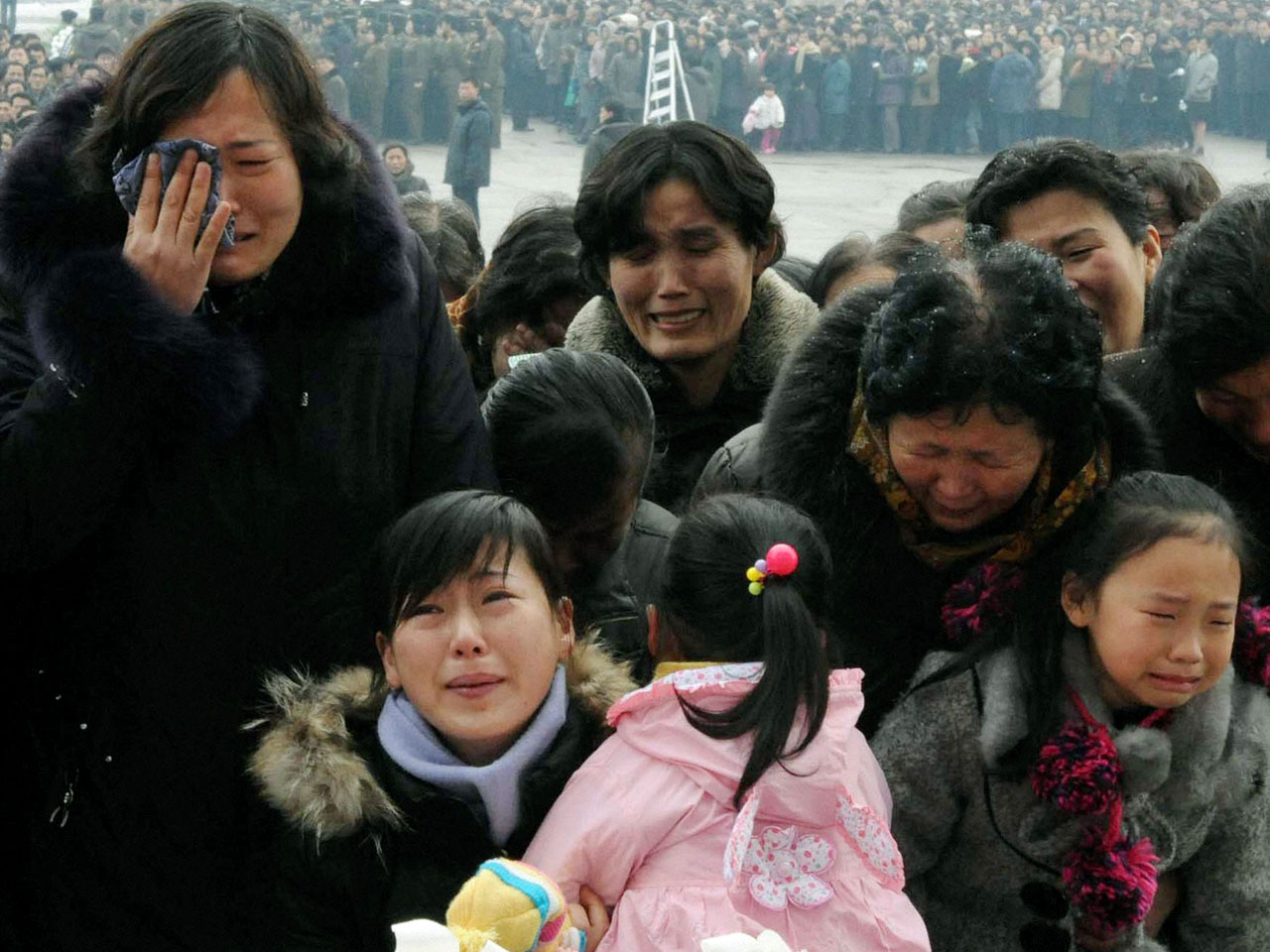 BEIJING - The scenes of mass grief coming from North Korea -- people falling to the ground weeping and cries of anguish amid somber crowds -- look forced.

More than theatrical, the mass mourning over the death of dictator Kim Jong Il is being driven by a mix of forces. Loss and fear of an uncertain future -- the same emotions that many feel at the death of a loved one -- become contagious in crowds. Added to that are the perils of crossing a police state. Self-interest is at work too, as many North Koreans work for the ruling Workers' Party, the military and state companies and institutions.

When Kim's father, North Korean founder Kim Il Sung, died in 1994, the mourning proved infectious to Kim Yeong-nam, who defected to South Korea in 1998 and now runs an art troupe of fellow defectors.

No relation to the country's leaders, Kim said fellow university students in Sinuiju city near the Chinese border wailed spontaneously at news of the death. In the days that followed, Kim found the solemn music and eulogies at staged events at public statues made him cry, even though he did not like the country's founder.

"They play songs and do everything they can to create a somber mood," Kim said.

Poor and largely isolated from outside information, North Koreans grieve in an atmosphere that is part family mourning, part coercion. The pressures to be part of a group that are present in all societies exert an especially strong force when the costs for resisting them are harsh. Its rigid controls on ordinary life make North Korea different in intensity, but hardly an exception.

Millions of Egyptians thronged Cairo's streets, crushing scores to death, for the funeral of President Gamal Abdel Nasser in 1970 even as his authoritarian repression left the country unstable. Palestinian communities erupt in cries of anguish and rage in response to deadly Israeli raids. Much of Britain, and the world, swelled in grief after Princess Diana's death in a car crash in 1997, though her life had been tabloid fodder for years.

It's the bandwagon effect: a powerful urge to belong to a group that impels people to behave in ways they might not ordinarily.

"Mourning, like laughter, is contagious in a social network," said Scott Atran, an American anthropologist who studies the psychology of groups at France's National Center for Scientific Research. Smoking and obesity, among other traits, he said, are often tied to the influence of a person's social mix.

"People usually believe they are slightly exceptional to the norm. But if they want to be part of the group they overexaggerate and go toward the extreme of what they think the norm is," Atran said.

(At left, watch North Koreans weeping in public earlier in the week)

Such behavior is more pronounced among East Asians, whose societies are more geared toward the family and larger groups than Americans and other Westerners. Shown a picture of a school of fish with one outlying fish, Americans tend to describe the outlier as a "go-getter" while East Asians say the fish has been "punished" or "ostracized," he said.

The pressures to belong are accentuated in North Korea. Its government rigidly defines social norms and portrays the leader as a protective father who keeps the nation safe and is deserving of total obedience in return. The message is inculcated through absolute control over the school curriculum and the media.

"Bad things have happened to North Koreans who refused the cult of personality around Kim Jong Il. Once in the habit of complying with cult norms, it is not easy suddenly to stop," Clark McCauley, a psychology professor at Bryn Mawr College, said in an email. Even victims of persecution, he said, sometimes come to regard the leader as a great man, regardless of their personal suffering.

North Korean media cued the tearful public response from the moment Kim Jong Il's death was announced Monday. A woman announcer, dressed in a black traditional robe, read the announcement in a voice that choked back tears, extolling him as a father who "valued and loved the people very much and always shared weal and woe with them."

An older man in glasses and dressed in a blue Mao-style tunic, shown on state television, sobbed to his colleagues while he recounted a visit by Kim Jong Il, often called the "general," to their theater company.

Not all North Koreans are likely to feel genuine remorse and some may even be hoping for change. Recurring famines and economic distress have wracked much of the country over the past 15 years, particularly interior provinces outside the largesse of Pyongyang, the showcase capital, and far from the Chinese border, where smuggling and trade have blunted the misery.

Kim, the defector, said North Korean state television mainly focused on mourning among the better-off residents of Pyongyang. "Even they might be crying out of fear for their own future without a familiar leader rather than out of a sense of loss," he said.

The scenes from North Korea ring true for older Chinese who remember the death in 1976 of Mao Zedong, the revolutionary leader whose radical policies killed millions and impoverished China but whom they were all taught to worship as a godlike father.

Like China in those days, North Korea is isolated, depriving people of information to compare their lives with other societies. The hold of the Workers' Party reinforces the message that North Koreans are vulnerable to aggression from the U.S. -- the nemesis since the Korean War -- and in need of a protective leader, said Brian Myers, an expert on North Korean propaganda at Dongseo University in Busan, South Korea.

Kim Jong Il, like his father Kim Il Sung, is portrayed as both a strong father figure and a nurturing mother in an almost biological relationship with the people, Myers said. Propaganda, he said, even refers to the leader as "the head of the national organism."

"The tears the people are shedding are not tears of sadness but tears of fear and uncertainty about the future," Myers said. In interviews with refugees and on a trip to North Korea in June, he said he was told "the reason they felt secure was because they had a good general watching over them. Now that the general that protected them has died and they have the young general they know little about, it is understandable they would feel uncertainty over the future."