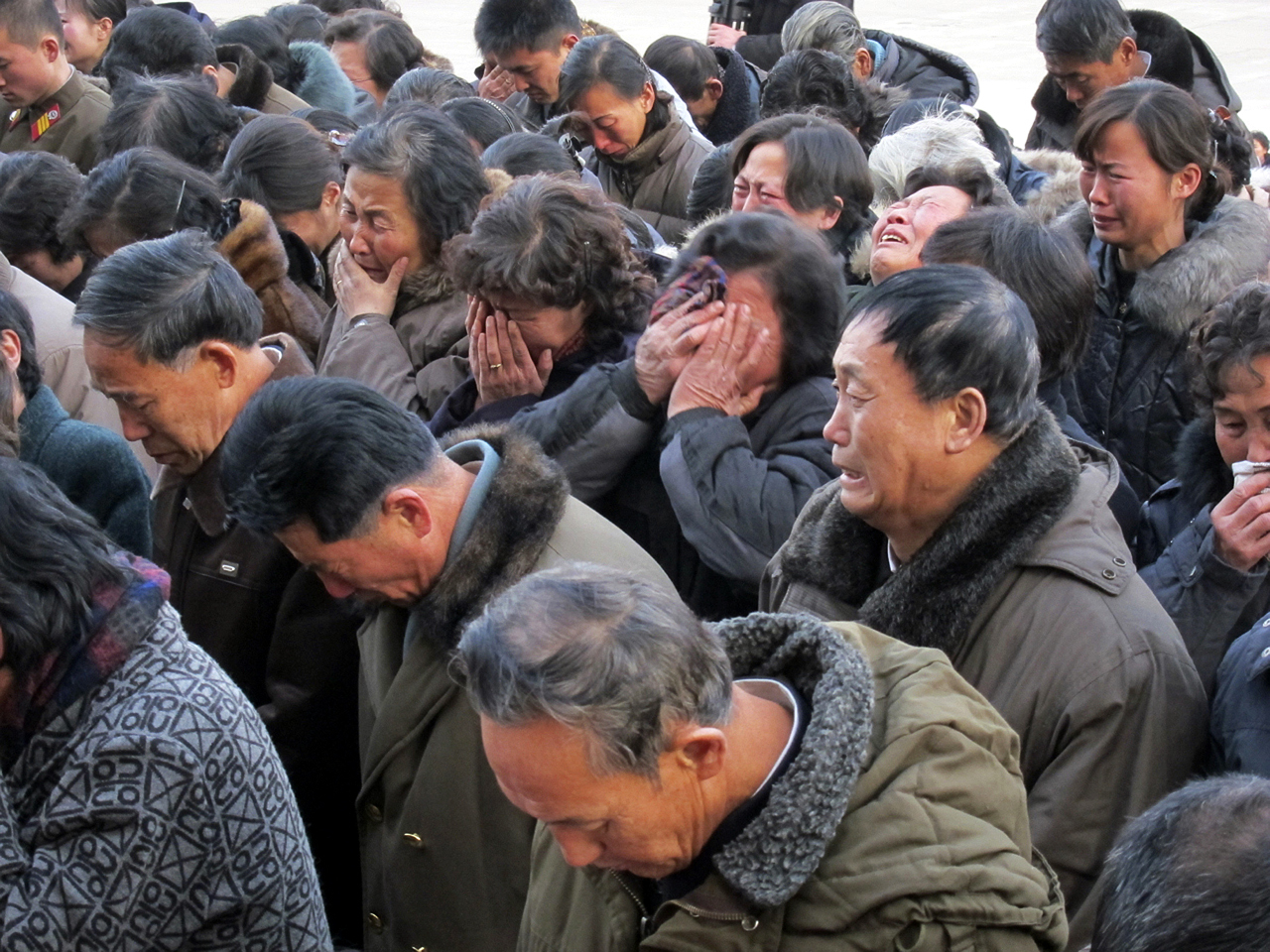 Women held handkerchiefs to their faces as they wept and filed past a huge portrait of a smiling Kim Jong Il hanging on the Grand People's Study House, in the spot where a photograph of Kim's father, North Korean founder Kim Il Sung, usually hangs.

Kim Jong Il died of a heart attack Saturday, according to state media, which reported his death on Monday.

A huge crowd of mourners converged on Kim Il Sung Square with traditional white mourning flowers in hand. The crowd grew throughout the day, even as heavy snow fell, and some mourners took off their jackets to shield mourning wreaths set up in Kim's honor, just below the spot where he stood last year waving to crowds at the massive military parade where he introduced his successor, Kim Jong Un.

Two medical workers rushed to carry away a woman who had fainted. (At left, watch North Koreans weeping in public earlier in the week)

"We chose to come here to care for citizens who might faint because of sorrow and mental strain," Jon Gyong Song, 29, who works as a doctor in a Pyongyang medical center, told The Associated Press. "The flow of mourners hasn't stopped since Tuesday night."

Worries around Northeast Asia have risen sharply as Kim Jong Un rises to power in a country with a 1.2-million troop military, ballistic missiles and an advanced nuclear weapons development program.

South Korea has put its military on high alert. In another sign of border tension, Chinese boatmen along a river separating North Korea and China told the AP that North Korean police have ordered them to stop giving rides to tourists, saying they will fire on the boats if they see anyone with cameras.

Along the Koreas' border, the world's most heavily armed, South Korean activists and defectors launched giant balloons containing tens of thousands of propaganda leaflets, a move likely to infuriate the North. Some of the leaflets opposed a hereditary transfer of power in North Korea. Some showed graphic pictures of former Libyan leader Muammar Qaddafi's battered corpse and described his gruesome death.

Seoul's National Intelligence Service believes the North is now focused on consolidating the younger Kim's power and has placed its troops on alert, according to South Korean parliament member Kwon Young-se.

Lawmaker Kwon said the NIS told the parliamentary intelligence committee that senior military officials have pledged allegiance to Kim Jong Un, and that more security officers have been deployed in major cities across the country. Intelligence officials declined to comment.

The NIS also gave its predictions on how the North's government will work during the transition of power to the younger Kim.

The NIS told lawmakers that an ad hoc committee is expected to handle key state affairs before Kim Jong Un formally becomes the country's leader, according to lawmaker Hwang Jin-ha, who also attended the closed-door briefing. Intelligence officials didn't describe how they got the information, he said.

The NIS predicts that Kim Kyong Hui, a key Workers' Party official, and Jang Song Thaek, her husband and a vice chairman of the powerful National Defense Commission, will play larger roles supporting the heir, the lawmaker said.

In 1994, Kim Jong Il declared a three-year mourning period following his father's death, becoming the official leader of the nation in 1997.

Kim Jong Un led a procession of senior officials Tuesday in a viewing of Kim Jong Il's body, which is being displayed in a glass coffin near that of Kim Il Sung. Publicly presiding over the funeral proceedings was an important milestone for Kim's son, strengthening his image as the country's political face at home and abroad.

According to official media, more than five million North Koreans have gathered at monuments and memorials in the capital since the death of Kim Jong Il at what state media said was the age of 69 — though some accounts say he was 70.

Hundreds of thousands visited monuments around the city within hours of the official announcement that Kim had died.