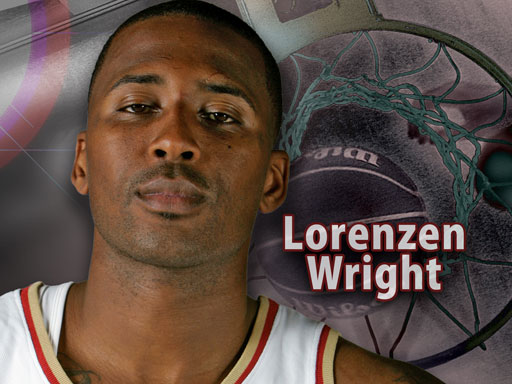 MEMPHIS, Tenn. (CBS/WREG/AP) The procession moved slowly and solemnly on Wednesday, a long line of mourners dressed in black and white, pausing in front of the silver casket of Memphis' slain native son Lorenzen Wright.

Leading the group was Lorenzen's father,  mother, and ex-wife Sherra with their six children. Each child was wearing a different team hat from their father's 13 year NBA career.

Hundreds of fans, friends and family members of the former NBA player filed into the FedEx Forum in Memphis for Wright's memorial service and funeral, remembering the man many called "Ren" as a loving, gentle, charitable family man.

Wright's body was found July 28 in woods outside Memphis after he had been missing for 10 days. The 34-year-old was shot to death in what police are calling a homicide. No arrests have been made and Memphis police will not discuss whether they have a motive or suspects.

Relatives and friends fought off tears as they addressed the crowd, still in disbelief at the way he died.

Jeffrey L. Archie told the audience that he may never understand why someone would kill his brother.

"To me he was invincible," Archie said. "There's no reason for anybody to take him like this."

Memphis Grizzlies owner Michael Heisley said Wright had movie star looks with an infectious smile, and served as the team's leader. Wright spent five of his 13 seasons in the NBA with the team in the city where he was born.

"We should all leave this hall with the thought that we're going to do a little bit in Lorenzen's honor to make sure things like this don't happen again," Heisley said. "That's the biggest service you could pay him."

Wright's six children and ex-wife were in the procession, trailed by his father, Herb Wright, who uses a wheelchair. Dozens of friends and family followed, stopping before a photo of Wright, then the casket. His mother, Deborah Wright, also attended.