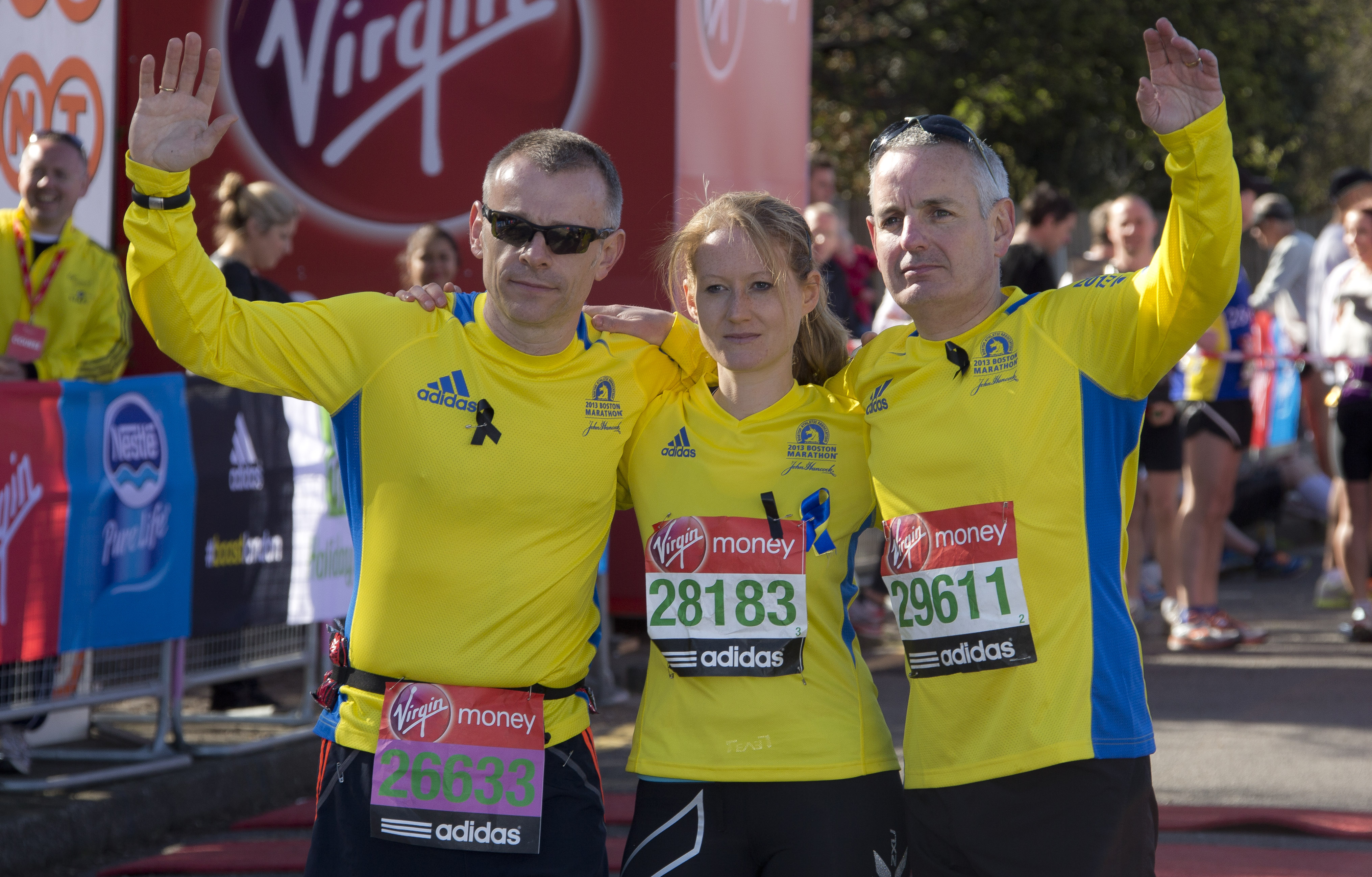 LONDON A defiant, festive mood prevailed Sunday as the London Marathon began on a glorious spring day despite concerns raised by the bomb attacks on the Boston Marathon six days ago.

Thousands of runners offered tributes to those killed and injured in Boston. The race began after a moment of silence for the victims in Boston.

Many of the runners were wearing black ribbons but the mood along the route was celebratory, reports CBS radio's Vicki Barber from London. People say they are not going to let last week's tragedy keep them away.

"It means that runners are stronger than bombers," said Valerie Bloomfield, a 40-year-old participant from France.

London's is the first major international marathon since the double-bomb attack near the finish line in Boston, which left three people dead and more than 170 injured, including many who are still hospitalized. In addition, a policeman was killed during the search for the two suspected bombers. One suspect was killed during a shootout with police, while a second has been arrested.

Some 36,000 runners were expected to take part in the London race, which also draws tens of thousands of spectators. Police said they planned to add 40 percent more officers and extra surveillance as a precautionary measure.

David Wilson, 45, said there was no question of canceling the marathon. He noted that Londoners had come back onto the streets the day after the lethal July 7, 2005, transit system bombings and weren't easily cowed.

"You can't not do anything, because otherwise you'd stay on the outs all the time," he said.

But Chris Denton, a 44-year-old engineer stretching his legs by the start line, acknowledged an undercurrent of anxiety. He'd asked that his family not come out to support him because of a possible copycat attack. "I left them at home," he said. "If only for my peace of mind."

Among the participants in London was Tomasz Hamerlak of Poland, who finished fourth in the men's wheelchair race and had competed in Boston last week. He said he was determined to race in London.

"It is terrible what happened in Boston, but we can't look back, we must look forward," an out-of-breath Hamerlak told The Associated Press moments after crossing the finish line. "The show must go on."

On Blackheath, the spacious green common area where the race begins, runners massaged one another's legs as loud pop music boomed on a sound system. A half-dozen police officers in reflective vests strolled around and chatted with the runners.Â

Moments before the majority of runners set off on the grinding course, announcer Geoff Wightman used the loudspeakers to ask for silence. He described marathon running as a global sport that unites runners and supporters in every continent in a spirit of friendship.

"This week the world marathon family was shocked and saddened by the events at the Boston Marathon," he said. "In a few moments a whistle will sound and we will join together in silence to remember our friends and colleagues for whom a day of joy turned into a day of sadness."

Blackheath, where the runners were gathered, fell silent. The only noise was the buzz of helicopters and the beeping of a truck.

Security was plentiful but not intrusive near the finish line at the Mall in front of Buckingham Palace. Marathon staff, officials and media had their bags thoroughly checked, a process not deemed necessary at the event last year. Officials said this was in response to the Boston attack.

Shirley Gillard, a 63-year-old retiree sitting on a bench at the edge of the starting area, seemed pleased with her decision to come out and watch the race.Â She described herself as the type of person who was always worried when spotting an unattended bag on public transport, but said people shouldn't change their habits because of what happened in Boston.

"That would be letting them win, the terrorists and lunatics," she said.

Marathon organizers plan to donate money to a Boston fund set up to help victims. They said they did not consider canceling the event, which is a highlight of the sporting calendar.

In a smaller event in Germany, some 15,000 runners were participating Sunday in the Hamburg Marathon. They wore armbands with the slogan "Run for Boston" as a mark of respect for the bombing victims.

Hamburg's top security official, Michael Neumann, has said that security "is adapted to the situation," without giving further details.

There was a brief security scare at a Hamburg subway station after the race started when a suspicious object was found. The station, which isn't on the race route, was closed while officials checked the object - which turned out to be an empty cardboard box, news agency dpa reported.

There was no disruption to the marathon. Hamburg organizers have said that they know of only eight people who pulled out because of the Boston bombings.

Tsegaye Kebede of Ethiopia won the marathon for the second time, clocking in at 2 hours, 6 minutes and 15 seconds to add to his 2010 triumph in London.

The women's race was won by Priscah Jeptoo, who cruised over the line in 2:20:15. The Kenyan clocked the fastest time this year to finish ahead of compatriot Edna Kiplagat, while Yikiko Akaby was third.