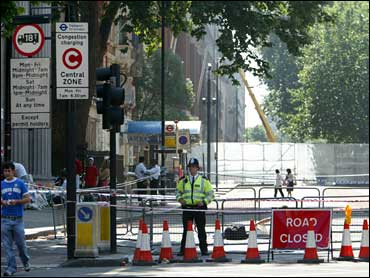 In a country where not all the police carry weapons, elite sniper squads now have shoot-to-kill orders, if there's intelligence that a terror suspect might have a bomb, and he refuses to surrender when challenged by police.

That's according to the Times of London, which reported Sunday that the special units are tracking as many as 12 suspects with ties to al Qaeda. The paper said Scotland Yard is worried those people could be planning more suicide attacks, but there isn't enough evidence to justify arresting, or even detaining them.

That may have been the case a year ago, reports CBS News Correspondent Steve Holt, when Britain's domestic spy agency MI5 checked out Mohammad Sidique Khan, one of the July 7 bombers. At the time, investigators decided he wasn't a threat to national security, and stopped tracking him.

A senior government minister insists Britain did not have a permissive attitude toward extremist Muslim refugees before the London bombings, dismissing criticism that lax policies have made Britain a fertile recruiting ground for Islamic extremists.

"But I don't think we have been ultra-liberal. ... What we have got to do now is unify all the forces in our society, in particular in the Muslim community, against those people who are fundamentally at odds with our values."

Three of the four men identified by police as the suspected suicide bombers were born in Britain to parents of Pakistani origin. They are Tanweer, Khan and 18-year-old Hasib Hussain, who were all from the Leeds area. The fourth suspect is Jamaican-born Germaine Lindsay, 19, who came to Britain as an infant.

Police on Saturday released an image captured by surveillance cameras showing all four bombers with backpacks entering the train station in Luton, north of London, on the morning of the attacks. Investigators say the four took a train from Luton to London's King's Cross station, where they split up to carry out the bombings.

The investigation in Leeds has focused in recent days on a shop called the Iqra Learning Centre which appeared to sell Islamic books and DVDs and offer seminars and presentations. Police on Saturday also began searching a property a few streets from Tanweer's home.

Officers have also been searching the Leeds home of an Egyptian biochemist for more evidence after investigators reportedly found traces of explosives in the man's bathtub. Magdy Mahmoud Mustafa el-Nashar is being interrogated by Egyptian authorities, who say the biochemist denies having any connection to the attacks.

Egypt is not prepared to hand el-Nashar over to Britain, Egyptian security officials said Saturday as British investigators arrived to sit in on the questioning. The two countries have no extradition treaty.

One of the victims of the London bombings, 53-year-old mother-of-two Susan Levy, was to be cremated in a private service in north London later Sunday. Police have said Levy was traveling on a subway train on the Piccadilly Line, which was hit by the bomb near King's Cross station. Levy's cremation was only the second funeral service so far for victims of the London bombs.

About 700 people were injured in the morning rush-hour attacks, and police said more than 40 people remained hospitalized, at least six of them in critical condition.