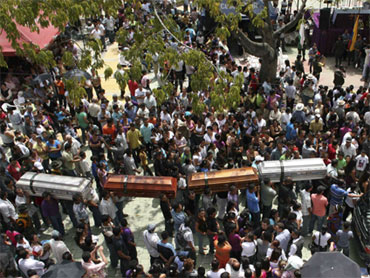 Authorities held out little hope Friday for the dozens of workers trapped underground after an explosion ripped through a coal mine, killing at least 18 during a shift change.

At least 50 workers remained unaccounted for a day and a half after the explosion and rescue efforts were moving slowly, impeded by the presence of dangerous gases, officials said. Authorities believe a methane gas buildup caused the explosion.

"It's unlikely that there are any survivors given the accumulation of methane gas and carbon monoxide," national disaster director Luz Amanda Pulido told The Associated Press.

A funeral service was planned in a local church Friday for nine of the 18 whose bodies were pulled from the San Fernando mine after Wednesday night's explosion. Coroners from the state prosecutor's office said most of the victims died from burns in the explosion, which happened in a 1.2-mile-long access tunnel that drops to a depth of 500 feet.

Mining Minister Hernan Martinez said the mine, located just south of the Antioquia state capital of Medellin, would not reopen until an investigation into the cause of the blast is complete.

He said Thursday that the mine's records indicate it lacked a methane ventilation pipe and gas-detection devices - basic safety features in coal mines.

Jorge Buitrago, general manager for the mine, owned by Carbones San Fernando, told the AP that it complied with safety requirements for monitoring and controlling gases. He declined to comment further.

Relatives of the missing miners were trying to absorb the shock of the explosion at San Fernando. They said the workers earned from $300 to $600 a month and conditions were generally good, although temperatures tended to rise as high as 104 to 113 degrees Fahrenheit.

She recalled what Pizarro often said about his job: "You know you'll walk into a mine, but you don't know if you'll come out."

The biggest loss of life at a mine in modern Colombia was in 1977, when 85 people died in a gas explosion at a separate mine in Amaga, said Tomas Charris, a researcher at Colombia's Uniandina University.

San Fernando is one of 3,000 underground mines in Colombia that produce 6 million metric tons of coal a year, said Jorge Martin Molina, an engineer in the mining department at Colombia's National University.