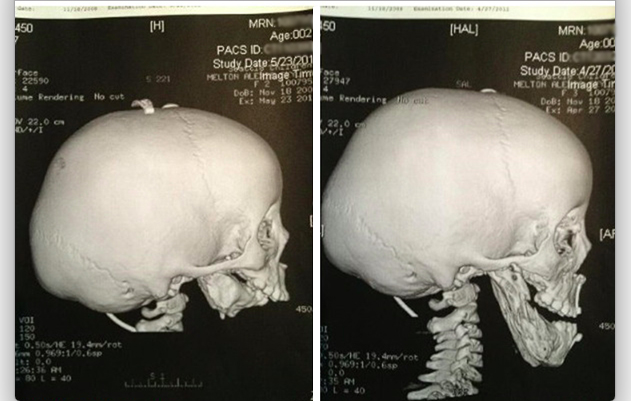 Lexi Melton was born seven years ago with no lower jaw.

Unusual symptoms during pregnancy had led her mom, Lisa, to undergo a sonogram at 27 weeks that revealed her baby's face was not forming properly. Prenatal tests ruled out more common birth defects, so high-risk pregnancy doctors monitored Lisa and the baby until Lexi arrived six weeks early by cesarean section.

A team of physicians at the University of Washington Medical Center, where she was born, and experts from nearby Seattle Children's whisked Lexi away from her mom immediately so they could place a tube in her nose that would hopefully allow her to breathe.

"Her jaw was really small, and we knew it was part of many genetic syndromes, many of which aren't life sustaining. We knew there was a high possibility that she would not be able to survive birth," said Lisa.

Four-pound Lexi made it through delivery and the nasal intubation and a few hours after she was born, a Seattle Children's neonatal intensive care ambulance transported her to their doors, where experts in pediatric facial and skull malformations were ready to help care for her, said her mom.

Now, after years of surgeries and extraordinary medical and personal efforts to give Lexi a chance at a more normal life, her parents and doctors are telling her story for the first time.

On day three of Lexi's life, she underwent an operation to create a tracheostomy, a surgically-made hole in the front of the neck that leads to the windpipe (trachea) and allows for breathing in people who can't do it naturally. Without a developed lower jaw, there was no hinge to help Lexi open and close her mouth and take in air. Also, the compression of the jaw against the airway, and the unusual positioning of the tongue, stopped the air from flowing to the lungs.

"It put a stranglehold on her windpipe," said her dad, Dave.

The tracheotomy was the first of 11 surgeries in her young life, said Dr. Richard Hopper, Division Chief of Plastic Surgery and Surgical Director of the Craniofacial Center at Seattle Children's Hospital.

Since then, Hopper has reconstructed the first-grader's lower jaw, collaborating with other pediatric medical experts from a variety of specialties at Seattle Children's, including plastic surgery, otolaryngology, nursing, neurology, orthopedics, pain management, the neonatal intensive care team, social work, and physical therapy.

Lisa said the medical team at Seattle Children's has seen their family through some very complex situations.

"Her team goes above and beyond to not only care for Lexi but also our whole family," she said.

Hopper told CBS News that Lexi's condition is called auriculo-condylar syndrome and it's very rare. Only about 24 cases have been documented in medical literature, according to the National Institutes of Health.

"We are one of the biggest craniofacial centers in the country but we've only seen this twice before," Hopper said.

He noted that a colleague at Seattle Children's, Dr. Michael Cunningham, and colleagues from around the globe, identified the genes responsible for auriculo-condylar syndrome. Two mutations, in either the GNAI3 or PLCB4 gene, are implicated, according to their study.

Research suggests that proteins produced by the GNAI3 and PLCB4 genes contribute to the development of structures in the embryo that ultimately develop into the jawbones, facial muscles, middle ear bones, ear canals, outer ears, and other related tissues. The gene mutations alter the formation of the lower jaw.

Hopper said in Lexi's case, instead of developing normally, the tissue of her lower jaw was shaped more like a small upper jaw but in mirror image.

Most people with auriculo-condylar syndrome have malformed outer ears. Lexi's are like little question marks, said Hopper. Like Lexi, individuals with the condition can have abnormalities of the mandible which include a very small chin (called micrognathia) and malfunction of the temporomandibular joint (TMJ), which connects the lower jaw to the skull.

"Lexi's lower jaw was so small that just by looking at her from the front, her face stopped at her teeth, and that makes reconstruction very challenging. The joints of her lower jaw aren't normal and they don't rotate properly," Hopper said.

Lexi's mom, Lisa, said sometimes people stare at her -- other children -- and they learned early the best way to address it was to be open about it. "When people are staring at her at the park, we open up and and say, 'It looks like you're interested and might have some questions.' And generally it's really positive and they'll be really warm with Lexi and us."

Lisa said they want to model for Lexi that just because people are staring doesn't mean the situation has to be negative.

One of the goals for Lexi was to eventually help her breathe without the tracheostomy, said her mom Lisa.

"Having a trach placed, an artificial airway, is a huge deal. She had no viable airway. If that trach came out, immediately she'd be in a life or death situation," said her mom. The tracheostomy made her more vulnerable to illness, too, because it created a new pathway for infection that the mouth and nose usually protect.

"It is a life-encompassing issue. Everywhere we went we had to carry resuscitation equipment. We got into a routine with that and certainly did our best and tried within that space to not limit her," Lisa said.

Hopper said, "The burden on a family for a child with a tracheostomy is horrific. A child needs almost constant care, sometimes up to 18 hours a day. If you're a single parent, it can totally consume your life."

The family juggled two jobs, parenting their first child (son Joshua) who is only a year and a half older than Lexi, and their daughter's medical appointments and care at home. They did not live close to extended family, so they built the best support system they could.

"A home health nurse made visits. Dave's family helped out. Mostly we put ourselves on a schedule. When Lexi was in the hospital, Dave would sleep overnight with Lexi and go to work in the morning and I'd sleep with Josh and take him to child care and then go to the hospital to be with Lexi. Both of our workplaces were really supportive and helpful and flexible and understanding," said Lisa, the education director at a preschool.

They brainstormed how, as parents, they could advocate for her.

"This is her life experience and how do we embrace it? You can't judge it and wish it wasn't there because that doesn't give you any power to appreciate what you have," Lisa said.

Lexi also underwent a gastrointestinal tube placement surgery at about 6 months of age so that she could receive adequate nutrition.

The jaw reconstruction surgery, which began when she was 3, actually involved four surgeries conducted between August 2011 and April 2012.

Hopper said the first in the series of operations required a bone graft -- taking two rib bones from her chest and moving them to Lexi's lower jaw to create bulk and structure.

"Because she is still growing, the ribs just grow back themselves," he said.

The next three surgeries involved placing hardware that would help expand the jaw, corrective surgery, and a procedure to take all of the hardware off.

The hardware ran through her lower jaw, under her ear and the base of her skull, and through to the other side.

In January of 2012, her jaw grew about three centimeters in 30 days, he said.

"The amount of growth they got was amazing. Literally, her face changed before our eyes," said Lexi's mom.

One of the goals of the four-part surgery was to allow her to breathe normally.

"Her tongue had been jammed up into her mouth, they were able to pull that down and give all that tissue some space," Lisa said.

Her doctor added, "We were noticing the change in her breathing. She wasn't as dependent on the tracheostomy." So by the end of the summer of 2012, otolaryngology experts at Seattle Children's removed the trach.

Now Lexi can breathe independently and enjoy activities she loves, her parents said. She attends the first grade and can speak (though not clearly yet). She is learning to read and write and is on target developmentally for her grade, said her mom. She has good friends and loves Irish dancing and skiing.

Lexi's surgeon, Hopper, said he and her parents have talked about next steps. There is still more surgery in the little girl's future. "She'll require reconstruction of the joint of her lower jaw," he said, so that she can eat and improve her ability to speak clearly.

Right now her mom said Lexi still gets nourished through her gastrointestinal feeding tube, but she goes out to dinner with her family and brings a lunch to school and can taste foods. She just can't chew and swallow yet.

But her digestive system is working fine. "The gut is still processing food, but the biggest change she'll need to get used to after future jaw hinge surgery is the swallow. The muscles of the throat are all involved with swallowing, and with time it should become easier," Hopper said.

They've marked the calendar for her next surgery in 2017. "We'll have to remove a block of bone just under skull base and that will create a graft to reconstruct a new joint using her own tissue. Her airway has opened, but she can't open her mouth without having bone grinding on bone," said Hopper.

Like all girls, he explained that her bones will not grow after she's about 16. "So we need to have a plan for the lower jaw to keep up with her growth until she's 16."

Lisa said Lexi is now beyond the "best case scenario" they envisioned when she was a very ill baby. "Even when the situation seems dismal, children are resilient and, given the opportunity, may completely surprise you with the gifts they have to share with us," she said.

Hopper said as a father himself, his heart goes out to Lexi and her family.

"I'm a father of twin daughters so am aware of all the stages any child goes through but to go through them with facial challenges and differences only makes it more exaggerated. Her entire family is amazing and supportive and the source of her strength," he said. "Even with all those supports we know there will be hard times."

Beyond surgery, what do her parents hope for Lexi's future?

Her mom said, "We hope that her speech articulation will be able to be clearer. Although she's successful now, she has to work really hard at it. We know there will be times in her life when that speech issue may create social challenges. We're hoping to continue to help make that an easier space for her."

She said they want Lexi to continue to feel empowered and confident about herself.

Her dad, Dave, said, "We want what any parent wants for any child. For them to be who they are. To not feel like they're limited in any way and be happy in who and what they do. Every single day I tell her how amazing and miraculous she is. It's important for her to hold on to that fact."

As for Lexi herself, she told CBS News, all she wants to do is dance. "I want to be an Irish dancer and perform on stage every day in a purple outfit."