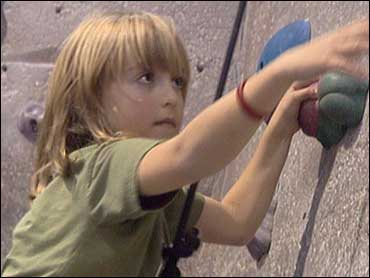 Whether man evolved from apes or not, there is little doubt that little boys are little monkeys. They'll scale anything.

Keats' parents, Bryan and Dana, are both flatlanders.

"It's absolutely nature and not nurture in his case because we didn't raise him to sit around and think 'lets go climb big mountains,'" Bryan said.

"It's not impossible to do something; you just have to believe in yourself to do it," Keats said.

Keats first asked his parents if he could do this after he saw a Kilimanjaro special on TV.

And what did his dad say?

But Keats kept bringing it up, every day, for months on end.

"He's just never been that driven before," Bryan said. "And so finally I said, 'Yes - with conditions.' And the conditions were that it was safe."

Fortunately, Kilimanjaro is not a very technical climb.

Experts say the hardest part is the thin air at altitude. To prepare for that, father and son have been hiking about five miles a day in the Hollywood Hills. Keats has also been taking climbing lessons - and polishing up on his Swahili.

They leave for Tanzania on Monday. If all goes well, the climb will take about a week.

And whether he makes it to the top or not, Keats will have definitely accomplished something - in fact, that was his dad's second condition.

"He had to do this for a cause bigger than himself. It could not be a vanity project, just because he wanted to climb a mountain," Bryan Boyd said. "He had to do it to make the world a better place."

To that end, Keats is using the trip to good ends. His proceeds will go to the Jane Goodall Institute and the Kids of Kilimanjaro.