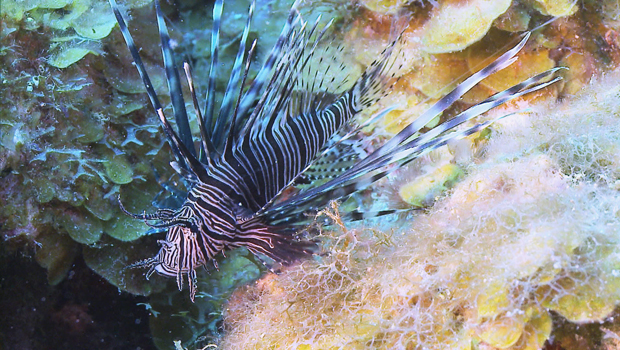 The prickly little creatures known as Lionfish are spearheads of an INVASION! Marlie Hall takes us under the sea.

The Atlantic's coral reefs bustle with marine life -- natural paradises filled with creatures of all colors, shapes and sizes, including the lionfish.

But this species is far from its native habitat; it's a sign of troubled waters.

"A lionfish is a beautiful, wonderful, ornate reef fish, native to the Indo-Pacific Ocean," said Lad Akins. "And now, we have lionfish which don't belong swimming all over our reef areas."

The lionfish are "super popular" in aquariums, Akins says. "And just like we see with other things, people sometimes set their pets free."

And soon a few abandoned pets started multiplying. A single lionfish can produce 2 million eggs a year. And with no natural predator in the Atlantic, there's plenty of this fish in the sea. Year after year, their numbers keep growing and growing.

Lionfish are always on the hunt for their next meal, gulping down whatever they can find -- many of them the young of fish we eat, like grouper and snapper.

That's mainly through derbies Akins organizes -- competitions across the U.S. and Caribbean for scuba divers to kill as many lionfish as they can. The goal: leave no lionfish behind.

For a better look at a derby near Fort Lauderdale, Hall went underwater with Project Baseline, a non-profit documenting the conditions of the world's oceans.

Co-founder Robert Carmichael took Hall to a shipwreck 120 feet down, where lionfish like to feed.

Lionfish can't be baited, trapped or trawled, so the derby's scuba divers must spear them one by one -- exercising patience and caution to avoid their venomous spines.

To prevent painful (though not deadly) stings, they place fish in a plastic tube known as a zookeeper.

"They don't really attack you," Carmichael said. "The only risk you really run is if you mishandle the lionfish."

And that's exactly what happened to diver Patrick Peacock, who was stung. "I wasn't careful," he told Hall. "It was a very big one. He came free and he poked me. And I had to end the dive."

But cut off the spines, as they did at the derby, and lionfish go from malicious to delicious. Lionfish ceviche, anyone?

Some of that day's catch was sent to Norman's Cay, a Caribbean restaurant in New York City.

Since lionfish must be killed one at a time, it's expensive, and this is one of the few restaurants serving it.

"We're not making any money on the fish, that's for sure," said co-owner Ryan Chadwick, who sells the fish for around $26 a plate -- less than what it costs.

"It's more about helping the ecosystem in doing something different," he told Hall.

And as for the taste? "It's a white, flaky, buttery fish," Chadwick said. He served the jerk lionfish, which has "a little heat, a little spice."

Which makes Lad Akins hope that maybe we can eat our way out of this problem.

"I think we have a lot of examples of eating through fish stocks," Akins said. "And here's a fish that needs to be controlled. And if we can provide a culinary value, I think we can impact the lionfish population just through removal for consumption. It's a win-win for everybody -- except the lionfish."

Just bring a sense of adventure (and your wallet) to the dinner table.