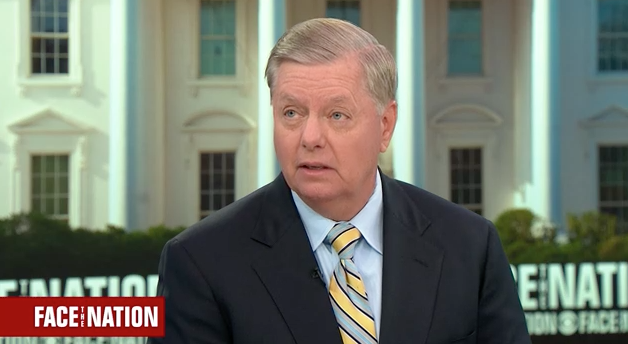 Sen. Lindsey Graham, R-South Carolina, is urging President Trump to safeguard the U.S. election process ahead of the 2018 midterm elections, telling the president to "lead this nation to make sure the 2018 election is protected."

Graham, a frequent Trump ally, said that the president often gets the issue of Russian interference "confused" with the accusations of of possible collusion between the Trump campaign and Russia.

"You didn't collude with the Russians, or at least I haven't seen any evidence, but Mr. President, they meddled in the elections. They stole [John] Podesta's emails, they hacked into the DNC, it could be us next. It could be some other power, not just Russia. Harden our electoral infrastructure for 2018,'" Graham said on "Face the Nation" Sunday.

Graham, citing the president's top intelligence chief Dan Coats, said that the "red light is blinking" and that he needs to "sit down with Congress and the administration and you lead this nation to hardening the 2018 election process before it's too late."

Regarding the mixed messages stemming from the meeting between Mr. Trump and Russian President Vladimir Putin in Finland last week, Graham said that he's glad Mr. Trump is "willing to walk things back and say he misspoke if it makes us stronger," adding that Mr. Trump has shown he's "willing to change" his views.

He noted, however, that what the president needs to do "is lead this nation to make sure the 2018 election is protected and he needs to be the leader of the movement, not brought to the dance reluctantly."

While the White House has said Mr. Trump could sit down with Putin once again this fall, Graham cautioned the president, saying that there needs to be a new set of strict sanctions imposed on Russia before any meeting.

"If he does show up, you need to have new sanctions over Putin's head," said Graham, urging a set of sanctions that "would be a hammer over Russia's head" for interfering in the U.S. electoral process.

"Do not meet with this guy from a position of weakness," he added.  "You need to be the leader of that movement and you need to work with Congress to come up with new sanctions because Putin's not getting the message. you've been tougher than Obama. I'll give you credit for that Mr. President, but it's not working. If you were really tough with Putin he would not be doing what he's doing."

This week on "Face the Nation with Margaret Brennan," January 30, 2022
Emily Tillett