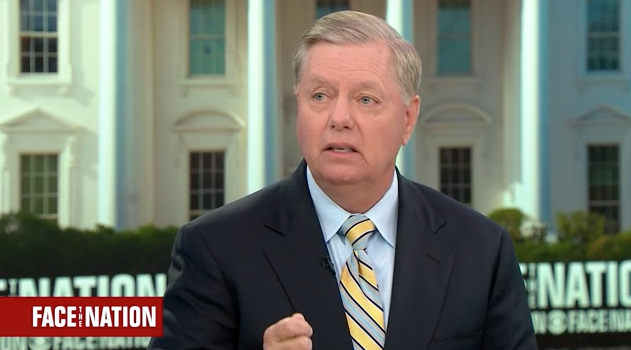 The following is a transcript of the interview with Sen. Lindsey Graham, Republican of South Carolina, that aired Sunday, July 22, 2018, on "Face the Nation."

MARGARET BRENNAN: Good morning and welcome to "Face the Nation." We begin today with South Carolina Republican Senator Lindsey Graham. Great to have you here, sir.

MARGARET BRENNAN: This morning the president is again accusing the Justice Department and the FBI of misleading courts and illegally surveilling his campaign. He's pointing to these documents that were just released about Carter Page who was a campaign associate and has admitted to having advised the Kremlin at one point. You sit on Senate Judiciary. Is the president wrong?

SEN. GRAHAM: No I think that the whole FISA award process needs to be looked at. The warrant on Carter Page was supported mostly by dossier that came from Michael Steele who is being paid by the Democratic Party to do opposition research and the dossier was collected I think from Russian intelligence services and if you ask the FBI today how much of the dossier on Trump has been verified. Almost none of it.

MARGARET BRENNAN: But you do say mostly. Not entirely. Therefore was the surveillance justified?

MARGARET BRENNAN: So the president is correct?

SEN. GRAHAM: In my view that the warrant, the FISA warrant process needs to be looked at closely about Congress. The main reason they issued the warrant was the dossier prepared by Mr. Steele. They never told the court that he was a paid operative in the Democratic Party. The substance of the dossier to this day is a bunch of garbage.

MARGARET BRENNAN: I'm pressing you on this because you have expressed some concern about the president's skepticism about his own intelligence community and this--

SEN. GRAHAM: This is completely different--

MARGARET BRENNAN: specific criticism of the FBI and Justice Department

SEN. GRAHAM: then whether or not the Russians interfered in our election -they did. The Carter Page warrant is whether or not the Trump campaign colluded with the Russians. I haven't seen any evidence of it but I think the president gets this confused. If you suggest that Russian-Russians meddled in 2016. He goes to the idea that well, I didn't collude with them. You didn't collude with the Russians or at least I haven't seen any evidence. But Mr. President they meddled in the elections. They stole Podesta's emails. They hacked in the DNC. It could be us next, it could be some other power, not just Russia. Harden our electoral infrastructure for 2018. Mr. President, Dan Coats is right -- the red lights are blinking. Get your entire government, which is doing a lot of good work but nobody knows about it, sit down with Congress and the administration and you lead this nation to harden-hardening the 2018 election process before it's too late. Not just from Russia but from others.

MARGARET BRENNAN: Well it sounds like you're saying after a week of, you know some conflicting statements, that you still aren't sure the president is fully believing what his intelligence community is telling him?

SEN. GRAHAM: He says but he's not acting. It's not what he said. He's changed his mind four times this week. I'm glad that he's willing to walk things back and say he misspoke if it makes us stronger. I'd given anything if President Obama were to change his mind when it came to withdrawing troops he was told if you do this it will be a disaster. He did it anyway. President Trump at least is willing to change. But what I- I think he needs to do is lead this nation to make sure that the 2018 election is protected and he needs to be the leader of the movement not brought to the dance reluctantly. So I hope he will direct his government working with Congress to harden the 2018 election before it's too late and if he meets with Putin.

MARGARET BRENNAN: This fall he's been invited to the White House.

MARGARET BRENNAN: Should that happen?

SEN. GRAHAM: Well if he does show up we need to have new sanctions hanging over Putin's head.

SEN. GRAHAM: Well you need to get with Rubio and Van Hollen and myself and others and come up with a set of sanctions that would be a hammer over Russia's head if they continue to interfere in the 2018 election-

MARGARET BRENNAN: Are they?

SEN GRAHAM: They are. Just have sanctions that can fall on Russia like a hammer. Do not meet with this guy from a position of weakness. You need to do two things you need to harden our electoral infrastructure. You need to be the leader of that movement and you need to work with Congress to come up with new sanctions because Putin's not getting the message. You've been tougher than Obama. I'll give you credit for that Mr. President, but it's not working. If you were really tough with Putin he would not be doing what he's doing. So being tougher than Obama doesn't get me to where I want to go. I want this man to stay out of our elections and quit disrupting the world. We need new sanctions. Heavy handed sanctions hanging over his head. Then meet with him.

MARGARET BRENNAN: I know you were just in Syria. Vladimir Putin--

MARGARET BRENNAN: --has said there were a number of agreements that he reached with President Trump in this private meeting. Do you have any assurance as to what the president agreed to when it comes to the presence of U.S. troops there?

SEN. GRAHAM: None. But here's the one thing that would be a disaster for the region if he agreed to withdraw our forces: Russia will never get Iran out of Syria. They did not take Assad's chemical weapons away. If you're riding- relying on Russia to be the policeman for Iran, that is the biggest mistake you could ever make. We need to keep our troops in Syria, protect the Kurds who helped us destroy ISIS, make sure that the place doesn't fall apart and ISIS doesn't come back.

MARGARET BRENNAN: It took the White House four days to respond to Vladimir Putin's offer on Ukraine. They did send another 200 million in security assistance.

MARGARET BRENNAN: Does that satisfy you? Why did it take so long?

SEN. GRAHAM: You know, I don't know. I don't know what deals were cut, if any, in that two hour meeting, and I don't mind with the president meeting with Putin again. You- you don't get a mulligan in this business, but you do get another start. You know, when Kennedy met with Khrushchev in Vienna it didn't go we'll, but he eventually got his footing with Russia. I hope Trump will get his footing with Russia. He's been tougher than Obama, but he hasn't been tough enough.

MARGARET BRENNAN: On North Korea, has the president's rhetoric gotten ahead of where we are in this process?

SEN. GRAHAM: I worry that China is pulling North Korea back. Here's what I would do: I would put deadlines in terms of when I want North Korea deliver the remains of- of our POW's and missing in action, and I would restart the military exercises. Mr. President, North Korea is playing the same old game with you they've played with every other president. You're being tough on China, and you should be, but China is pulling North Korea back. You need to make sure that China and North Korea know and believes that you're different than everybody else. Restart these military exercises and put on the table removing our dependence from South Korea as a real, stern warning to North Korea of what happens if they play you.

MARGARET BRENNAN: I want to ask you a little bit about how the president's trade policies are impacting your home state of South Carolina, BMW's largest exporter of cars—

MARGARET BRENNAN: --from the U.S. Their biggest plant is in South Carolina.

MARGARET BRENNAN: How much damage is this tariff war doing?

SEN. GRAHAM:  It's hurting, but the biggest damage will be if we allow China to continue to cheat. They can build a luxury car that will be just like X5 in China. They can build Boeing- they can build wide body jets just like the 787. If we don't stop China from stealing intellectual property and having business practices that no other country would accept, all these companies are complaining about the tariffs today will be driven out of business. I'm willing to accept some pain. I'm willing to push back hard against China, but we need to get a good a good outcome. Start with Mexico and Canada, Mr. President. Let's don't fight the whole world. Let's get our backyard in a good spot.--

MARGARET BRENNAN: But the- the tariffs that he's threatening on automobiles are coming from Europe not China.

SEN. GRAHAM: Well China put a 40 percent tariff on BMWs going into China from the United States. They make 81,000 cars in Greenville South Carolina sold to China. The X5, there's a 40 percent tariff on that product. It's hurting us in South Carolina. I don't know how you get China to change if you're not willing to experience some pain. The European markets need to be opened up but the Europeans are not our enemy. Mexico and Canada are not our enemy. When it comes to trade, China is our enemy.

MARGARET BRENNAN: And we know European negotiators coming here this week, so we'll be watching that. Senator, thank you very much.