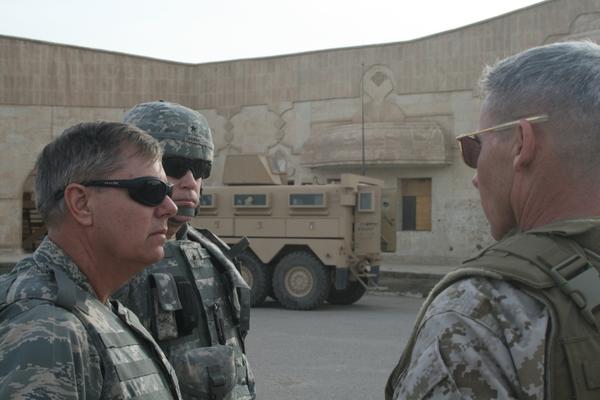 Sen. Lindsey Graham, R-South Carolina, announced Thursday that he will reluctantly retire from the Air Force Reserves, where he had been promoted to the rank of colonel over his decades of service.

I will turn 60 in July which is the retirement age for Air Force Reserves. I would continue to serve but the time has come for me to retire

It's been one of the great honors of my life to serve in the Air Force in some capacity for more than three decades.

I am proud to have been in the company of so many patriots for so many years. I will miss it an awful lot. pic.twitter.com/LtbsTtaIeH

The announcement comes just days before June 1, when Graham is set to announce that he is running for president.

"It's been one of the great honors of my life to serve in the Air Force in some capacity for more than three decades," the senator said in a statement. "The Air Force has been one of the best things that has ever happened to me. It identified and developed my talent, and helped me become useful to my country. It offered me adventure and showed me the world. It gave me a purpose bigger than myself. It put me in the company of patriots. It's been almost like family to me. I'm going to miss it an awful lot, and I wouldn't leave if they weren't making me."

Graham is one of three senators serving in the Guard or Reserves (the other two are Iowa Sen. Joni Ernst and Alaska Sen. Dan Sullivan, both Republicans). His most recent position was a Senior Individual Mobilization Augmentee to the Judge Advocate General.

Before he became a member of Congress, Graham was on active duty from 1982 to 1988, including a four-year posting at Rhein-Main Air Force Base in Germany. From 1989 until 1995, he served in the South Carolina Air National Guard and was called to active duty for state-side service during the first Gulf War. He helped prepare members for deployment at McEntire Air National Guard Base as a Staff Judge Advocate. He joined the Air Force Reserves in 1995.

Graham would frequently travel to Iraq and Afghanistan for short-term reserve duties to work on rule of law issues, including a trip over the recent Memorial Day recess in Congress. In 2014, he was presented a Bronze Star Medal for exceptionally meritorious service as a senior legal advisor during Operation Enduring Freedom.