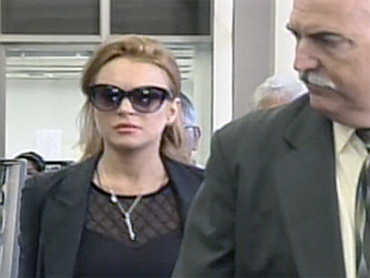 Lindsay Lohan is out on bail, and is expected to be back in court at the end of October. But it's what she may do between now and then that has some people questioning her motives.

CBS News correspondent Tara Mergener reports starlet will likely be checking into a rehab clinic at any moment.

Cebrity website TMZ reports Lohan will go to rehab today. The live-in facility, the site reports, will be located in Southern California, where she will be close to friends and family. The gossip site reports Lohan will not receive special treatment, ad the plan is for her to stay until her court date next month,or even longer.

Celebrity website Radar Online reports she's considering the Betty Ford Center in Rancho Mirage, Calif., though she is reportedly "in denial" about being an addict.

Ken Baker, of E! News, told CBS News, "I don't think she thinks she's as sick as other people think she is."

But volunteering to go to rehab could be a smart legal strategy.

Former federal prosecutor Laurie Levenson, a professor at Loyola Law School, told CBS News, "When she goes back in front of the judge she can argue, 'I'm starting to clean up, you don't have to give me more rehab time, you can trust me.'"

But before earning that trust, Mergener noted,Lohan is required to wear an alcohol monitoring bracelet -- it's part of the deal that enabled her to post bail and leave jail Friday after just nine hours behind bars. Since then, she's been busy.

On Sunday, Lohan visited a Los Angeles shelter called The Dream Center, where she met with families and handed out purses to teenagers.

Shortly after leaving, Lohan tweeted her fans about the experience, "What a great place the dream center is here in L.A. Had a nice time there today, it's so important to give back. I feel blessed."

Baker said, "Lindsay has gone from being in jail to out of jail to suddenly being a Mother Teresa-like figure in nothing but the span of three days."

But some in Hollywood question the motive behind her sudden acts of kindness.

Baker said, "It's no secret in Hollywood that Lindsay Lohan is damaged goods. The question is, can she repair herself and repair her image so that people will feel confident enough to hire her?"

Chris Hanley, producer of the film, told CBS News, "She's the best actress for the part and we are still totally behind her and want her to be the lead."

"Early Show" co-anchor Harry Smith added on the broadcast that it looks as if Lohan is trying to cash in on her celebrity. According to Us magazine online, Lohan has been shopping around a photo of herself in her alcohol monitoring bracelet. The reported asking price? $10,000.

Lohan is expected back in court on October 22.