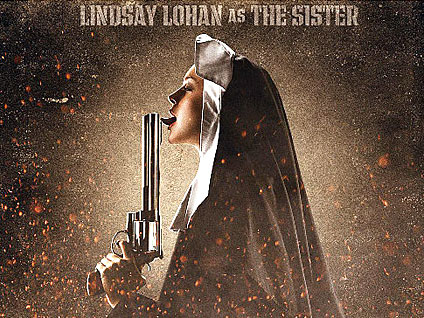 The controversial star appears in a provocative promo poster for the film, which shows Lohan dressed in a nun's habit, licking a long barrel gun. Above her reads, "Lindsay Lohan as The Sister," proclaiming the 24-year-old as a freewheeling loose cannon.

Lohan's "Machete" poster, shot by photographer Tyler Shields, appears only days after her conspicuous absence from the film's official trailer.

According to the New York Daily News, Lohan appeared prominently in Rodriguez's unofficial trailer, which was released earlier this year for Cinco de Mayo to protest Arizona's immigration laws.

E! Online reports that Lohan's role in the film "isn't all that big" suggesting that there just wasn't enough footage of her in "Machete" to be teased in the trailer.

Lohan's sentencing last week to 90 days for violating her probation on a pair of 2007 DUI busts may threaten to derail her promotional touring for Rodriguez's upcoming motion picture.

"Machete" will appear in theaters on Sept. 3.