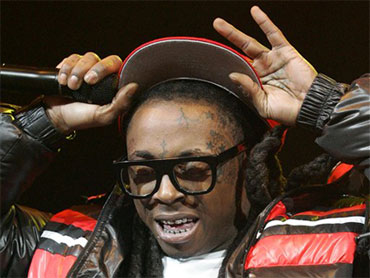 Lil Wayne emerged as a top-selling musician known for his clever wordplay and risqué lyrics, but like rappers before him, he's staring down a year behind bars at the peak of his career.

The artist returned to his hometown of New Orleans for a performance Monday on what he's calling his farewell tour.

"I'm nothing without you," he told the screaming crowd of thousands of fans at the New Orleans Arena after opening the concert with "A Milli," which last year earned him a Grammy for best rap solo.

The 27-year-old rapper, whose real name is Dwayne Carter, pleaded guilty in October to a weapons possession charge and will be sentenced Feb. 9. His plea deal calls for a year in jail.

The charge stemmed from a 2007 traffic stop of his tour bus in New York when authorities said they smelled marijuana, and as they approached, he tossed aside a bag with a loaded .40-caliber handgun.

In a separate case, he also faces trial in March on felony drug possession and weapons charges in the state of Arizona. More recently, he had to postpone a show one day after authorities stopped two of his buses in Texas and found marijuana. The case has been referred to the sheriff's office.

As thousands of fans filed through the New Orleans Arena doors Monday, many said they were disappointed with the rapper's legal troubles.

"It's kinda sad, the stereotype and that he fell into it," said 19-year-old Lee Farrell of New Orleans.

Lil Wayne is set to follow some of rap music's biggest names - from Tupac Shakur, Lil' Kim, Beanie Sigel and Shyne to New Orleans natives Mystikal and C-Murder - who have served a few months to several years behind bars for crimes committed after they became famous.

Corey "C-Murder" Miller was convicted earlier this year of second-degree murder for the 2002 shooting of a fan during a nightclub brawl. He was sentenced to life in prison.

Atlanta rapper T.I. was released from a federal prison in Arkansas and sent to a halfway house in Georgia earlier this month. T.I. began serving his sentence of a year and a day for illegal firearms possession and possessing a gun as a convicted felon last May. He's expected to finish his sentence in the halfway house.

"I hope Lil Wayne will follow in T.I.'s footsteps," said 32-year-old Jed Wright, who brought his 11-year-old stepson to the show as a Christmas present. "T.I. promised to turn his life around. Lil Wayne can do the same thing."

Lil Wayne has been rapping since he was a teenager. Over the past two years, his career has reached new heights with several Grammys and gold records. His "Tha Carter III" topped all album sales in 2008 with 2.8 million copies sold. The record had the No. 1 smash "Lollipop," and last year he won a Grammy for best rap solo for "A Milli."

"He's very unique," said 18-year-old April Nguyen. "He expands his genre, even does rock music, and is constantly reinventing himself."

Lil Wayne's next album, "Rebirth," is due for release Feb. 1. After New Orleans, he is scheduled to play a couple of dates in Texas and another show in southern Louisiana.