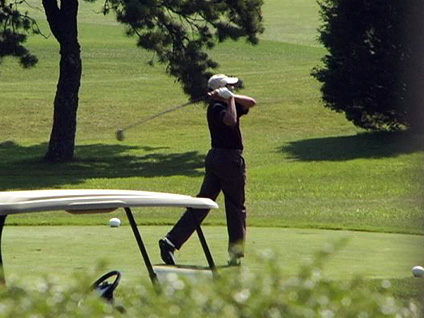 Editor's Note: This post was written before President Obama's 2010 trip to Martha's Vineyard. Click here for Mark Knoller's latest dispatch on the president's vacations, including the latest statistics on his 2011 trip.

Every White House is a bit defensive about presidential vacations and President Obama's staff is no exception.

"Whenever you talk about a presidential vacation you ought to put the word "vacation" in quotes because you can bet that there will still be work that he's doing every day," deputy press secretary Bill Burton told reporters yesterday on Air Force One.

Mr. Obama and family are today beginning a 10 day "vacation" on Martha's Vineyard. (Okay, Bill, those quotation marks are for you.")

Burton is right in that a president is never really on vacation. The job follows him wherever he goes as does a sizeable contingent of aides, secret service and communications personnel as well as the military officers who carry the "football," the nickname for the briefcase containing the nuclear launch codes. Some vacation...

Burton made a point of saying that Homeland Security Advisor John Brennan is among those accompanying Mr. Obama to Martha's Vineyard and will give him a national security and intelligence briefing every day.

Like its predecessors, the Obama White House is unapologetic about the president getting away for some rest and recreation. Last summer, Mr. Obama played golf on 4 of his eight days on Martha's Vineyard. It's also billed as time for him to spend with his family before his daughters go back to school in September.

"I don't think there's an American person who doesn't know that the president is working hard to do everything possible to get this economy back on the right track," said Burton to emphasize the point that the president deserves some time away from the White House grind, even if some of the grind goes with him.

This is Mr. Obama's 9th vacation since taking office. As of today, he has spent all or part of 38 days on "vacation" away from the White House. He has also made 14 visits to Camp David spanning all or part of 32 days. It brings his total time away to all or part of 70 days.

It's less than the "vacation" time taken during the same period by his immediate predecessor. (Former President George W. Bush gets the quotation marks too.)

To show that even as he heads on vacation he's on the job, the White House announced that Mr. Obama would make a statement on the economy before getting on Marine One to begin his trip to the Vineyard.

Burton also said yesterday that Mr. Obama would be getting "constant updates on what's happening in the economy and other issues" while on Martha's Vineyard, where he has rented a house for his time there.

"Like a lot of American people, the president is taking a little time with his family to recharge his batteries," Burton said. But when asked if Mr. Obama really needed a vacation, Burton stopped short of making that assertion.