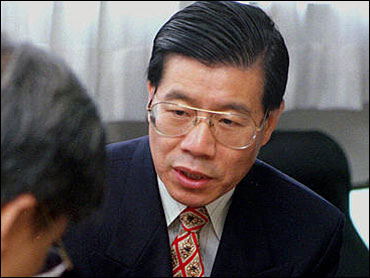 Wang, 55, was arrested after police said they found him tied up in a temple July 3. However, pro-democracy activists suggested he was abducted in Vietnam by Chinese agents after he secretly met with Chinese labor leaders in Hanoi.

Wang was convicted by a court in the southern city of Shenzhen of "espionage, (and) organizing and leading a terrorist group," Xinhua said in a two-sentence report. A woman who answered the telephone at the court said no one was available to give any more information.

China said last month that it had verified that Wang sold state secrets to a spy organization in Taiwan beginning in the early 1980s. Police also accused Wang of publishing articles on the Internet advocating terrorism.

The U.S. Embassy in Beijing and the Chinese Foreign Ministry had no immediate comment.

Wang's daughter said the family did not know what its next step would be.

"I just heard the news. We don't know what we're going to do at this point. I'm going to talk to my family," Wang Qingyan said from San Gabriel, Calif.

The Free China Movement says Wang Bingzhang is innocent. The group, which is based in Washington, is also calling on the government here to "exert all its influence" to win his release.

"The sentence demonstrates the barbarous character of the Chinese government," said Timothy Cooper, the group's international director. "We believe that he is innocent of all charges that he's been convicted of and we believe he should be freed."

In Hong Kong, activists tried to leave a letter protesting Wang's conviction at the central Chinese government's liaison office, but were blocked by about 50 police surrounding the building, according to a group member.

About 10 activists scuffled briefly with the police, then burned the protest letter after being blocked from delivering it, activist Lau San-ching said.

Wang Bingzhang was visiting Hanoi with two other dissidents when they were reported missing in June.

Chinese authorities say they found all three in southern China's Guangxi region, which borders Vietnam, while they were investigating a kidnapping case. Wang Bingzhang apparently was taken to Shenzhen, near Hong Kong, where he was formally charged Dec. 5.

The Chinese government has said the other two dissidents - Yue Wu and Zhang Qi - were cleared of involvement in Wang Bingzhang's activities.

Wang Bingzhang, a Chinese citizen, has permanent residency status in the United States.

He was a medical student in China when he started speaking out against the communist government and was jailed twice. He went into exile in Canada in 1979 and, in the 1980s, lived in New York, where he published the pro-democracy magazine China Spring and organized the Chinese Alliance for Democracy.

Wang Bingzhang slipped into China in 1998 without permission, saying he planned to organize a Chinese Democracy and Justice Party to press for free elections and civil liberties. He was caught and deported.