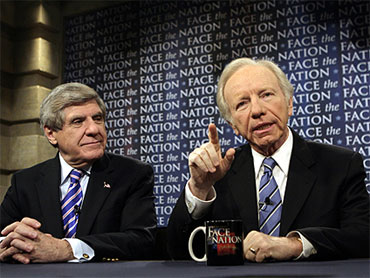 Senate Democrats who thought they had found a workable compromise on health care reform learned otherwise from independent Sen. Joe Lieberman over the weekend.

The Connecticut senator, whose vote is critical to the bill's prospects, threatened Sunday to join Republicans in opposing health care legislation if it permits uninsured individuals as young to 55 to purchase Medicare coverage.

Lieberman expressed his opposition twice Sunday: first in an and more strongly later, according to Democratic officials, in a private meeting with Senate Majority Leader Harry Reid.

Reid, who is hoping to pass the legislation by Christmas, needs 60 votes to overcome Republican objections and has been counting on Lieberman to provide one.

But appearing on "Face the Nation," Lieberman said of the Medicare proposal, "Though I don't know exactly what's in it, from what I hear, I certainly would have a hard time voting for it because it has some of the same infirmities that the public option did.

"It will add taxpayer costs. It will add to the deficit. It's unnecessary," he added of a provision that Reid last week hailed as part of a breakthrough between liberals and moderates.

Democratic aides, speaking on condition of anonymity, said Lieberman later told Reid he would support a Republican-led filibuster against the bill if it contained the Medicare provision or permitted the government to sell insurance in competition with private companies.

The same aides added that Lieberman had responded differently last week when Reid asked him privately about the proposed Medicare provision. "He voiced support for the idea," said one official. Lieberman's public comments last week were also generally favorable. The aides spoke on condition of anonymity, saying they were not authorized to comment publicly.

In an interview that aired Sunday night - but was recorded last week - President Barack Obama voiced optimism about his call for sweeping legislation to expand coverage while cracking down on the insurance industry.

"I think it's going to pass out of the Senate before Christmas," he told CBS' "60 Minutes."

"With the American people as overwhelmingly opposed to this bill as they are, for the Democrats to basically, arrogantly take the position that we're going to ignore public opinion and jam this through before Christmas, I think that's really a stretch," Senate GOP leader Mitch McConnell, R-Ky.,

If Lieberman follows through on his plans, he leaves Democrats with few options. Most obviously, they could strip out the provisions he opposes, and hope liberals overcome their inevitable unhappiness and vote for the bill. For that approach to have any chance of success, Mr. Obama would have to lobby heavily in its favor.

Watch CBS News Videos Online
Democrats have some political leverage, however. Lieberman lost the Democratic nomination for re-election the last time he ran, in 2006, then won a new term as an independent. Even so, he retains his chairmanship of the Homeland Security and Government Affairs Committee, a post he holds at the pleasure of the Democratic-controlled Senate.

"I'm concerned that it's the forerunner of single-payer - the ultimate single-payer plan, maybe even more directly than the public option," Nelson said of the Medicare proposal. By single-payer, he meant national health insurance run by Washington. Unlike Lieberman, Nelson participated in negotiations last week between liberals and moderates that produced the general framework that included the Medicare provision.

Nelson also is seeking stricter abortion restrictions than are currently in the bill.

"The whole reason we're doing this bill is to bring down cost, first for the American people in health care, and secondly for the deficit," said Democratic Sen. Claire McCaskill of Missouri. "So until we get the numbers back from the Congressional Budget Office, we're all on hold."

Asked if she would vote against the bill if it raised health care costs overall, she said, "Absolutely."

Lieberman, Nelson and McConnell spoke on "Face the Nation." McCaskill was on "Fox News Sunday."