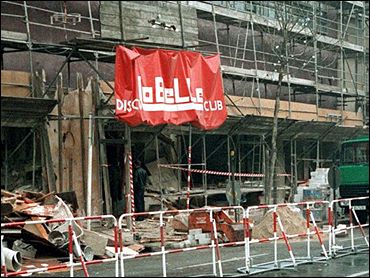 Libya agreed Tuesday to pay $35 million in compensation for victims of a 1986 bombing in Berlin that killed three people and injured 229 others, the Libyan ambassador to Germany said.

The deal came in negotiations in Berlin between Libyan officials and lawyers for German victims of the bombing at the La Belle disco, Ambassador Said Abdulaati told The Associated Press.

He said the deal applies to Germans who were wounded in the April 5, 1986 attack and the family of a Turkish woman who was killed, but not to two U.S. servicemen who also died in the explosion.

A German lawyer involved in the talks also said the two sides had settled.

"I can confirm that there has been a settlement for $35 million in the La Belle case," Sven Leistikow told The Associated Press by telephone.

The latest talks were held at a secret location in Berlin.

La Belle was a hangout for U.S. soldiers when they were stationed in West Berlin during the city's Cold War division.

A Berlin court ruled in 2001 that the bombing was organized by the Libyan secret service and aided by the Libyan Embassy in then-communist East Berlin. It convicted four people of carrying out the bombing, and a federal court upheld their sentences last month.

Libya's recent settling of the Pan Am and UTA airliner bombing cases — part of Libyan leader Moammar Gadhafi's effort to end his country's pariah status — had raised expectations of compensation for the La Belle bombing.

Libya accepted responsibility last year for the 1988 Pan Am bombing over Lockerbie, Scotland, that killed 270 people and agreed to pay $2.7 billion in compensation to the victims' families.

On Jan. 9, Libya signed a $170 million compensation agreement with families of victims of a 1989 French UTA passenger jet bombing.

After the La Belle bombing, then-U.S. President Ronald Reagan cited "irrefutable" evidence that Gadhafi was behind it and launched retaliatory airstrikes on Libya 10 days later.

The La Belle case only took shape after Germany reunited in 1990 and East German secret police files were opened. The Stasi files led prosecutors to a Libyan who in 1996 agreed to cooperate with them.

Among the evidence was an intercepted radio transmission from Tripoli to the Libyan Embassy in East Berlin calling for an attack "with as many victims as possible."