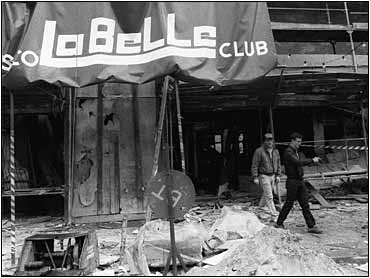 Fifteen years after the deed, a Berlin court convicted four people Tuesday in the 1986 bombing of a West Berlin disco that killed two U.S. soldiers and a Turkish woman. The United States blamed the attack on Libyan leader Moammar Gadhafi — a charge the court said was not proven.

The court said the bombing was planned by members of the Libyan secret service and workers at the Libyan Embassy in then-East Berlin. But Judge Peter Marhofer said prosecutors failed to prove that Gadhafi himself ordered the attack, due to the refusal of the German and U.S. secret services to provide evidence.

"Libya bears at the very least a considerable portion of the responsibility for the attack," Marhofer said.

Marhofer said "the limited willingness" of the German and U.S. governments to share additional intelligence was one of the disappointments of the trial.

The court said all four defendants plotted the attack, but it found only Verena Channa, a 42-year-old German, guilty of murder. She was sentenced to 14 years in prison.

Yassir Chraidi, a 42-year-old Palestinian accused of being the main organizer, was convicted of multiple counts of attempted murder, as were Musbah Abdulghasem Eter, a 44-year-old Libyan, and a Lebanese-born German, Ali Chanaa, 42. Chraidi was sentenced to 14 years; Eter and Ali Chanaa to 12 years each.

Prosecutors had sought life sentences for all four.

A fifth defendant, Verana Chanaa's sister, Andrea Haeusler, 36, was acquitted because of a lack of evidence.

The United States launched retaliatory airstrikes that month on two cities in Libya, which it blamed for the bombing. But after years of investigations and often murky testimony, the four-year trial became a lesson in the difficulty of trying to prove terrorist connections — especially more than a decade after the events.

Prosecutors hoped the trial would prove that Gadhafi had ordered the attack in an act of state-sponsored terrorism.

Chief prosecutor Detlev Mehlis argued that proving his charge of Libyan "state terrorism" in court would strengthen the signal intended by the U.S. war on terrorism in the wake of the Sept. 11 attacks on New York and Washington — that its sponsors will not go unpunished.

Investigators were largely in the dark before the archives of the former East German secret service, the Stasi, opened up after the Berlin Wall fell and Germany reunited in 1990.

Stasi files led prosecutors to Eter, who in 1986 was persuaded to provide evidence for the government's case. He remained a defendant, however, because of what prosecutors cited as limited cooperation.

Prosecutors say he was the Libyan spy agency's point man at the embassy in what was then communist East erlin. He also was listed as an agent in the Stasi's files.

Two others who worked at the former Libyan Embassy — Chraidi and Lebanese-born Ali Chanaa — were accused of organizing the attack.

The indictment accused Gadhafi of ordering the bombing in revenge for a U.S.-Libyan naval clash in the Mediterranean.

Among the evidence cited was an intercepted radio transmission from the Libyan capital of Tripoli to the Libyan Embassy in then-East Berlin calling for an attack "with as many victims as possible."

The five suspects were arrested in 1996 in Lebanon, Italy, Greece and Berlin.

After the United States said it had evidence linking Libya to the bombing, U.S. President Ronald Reagan ordered retaliatory strikes against Tripoli and Bengasi.