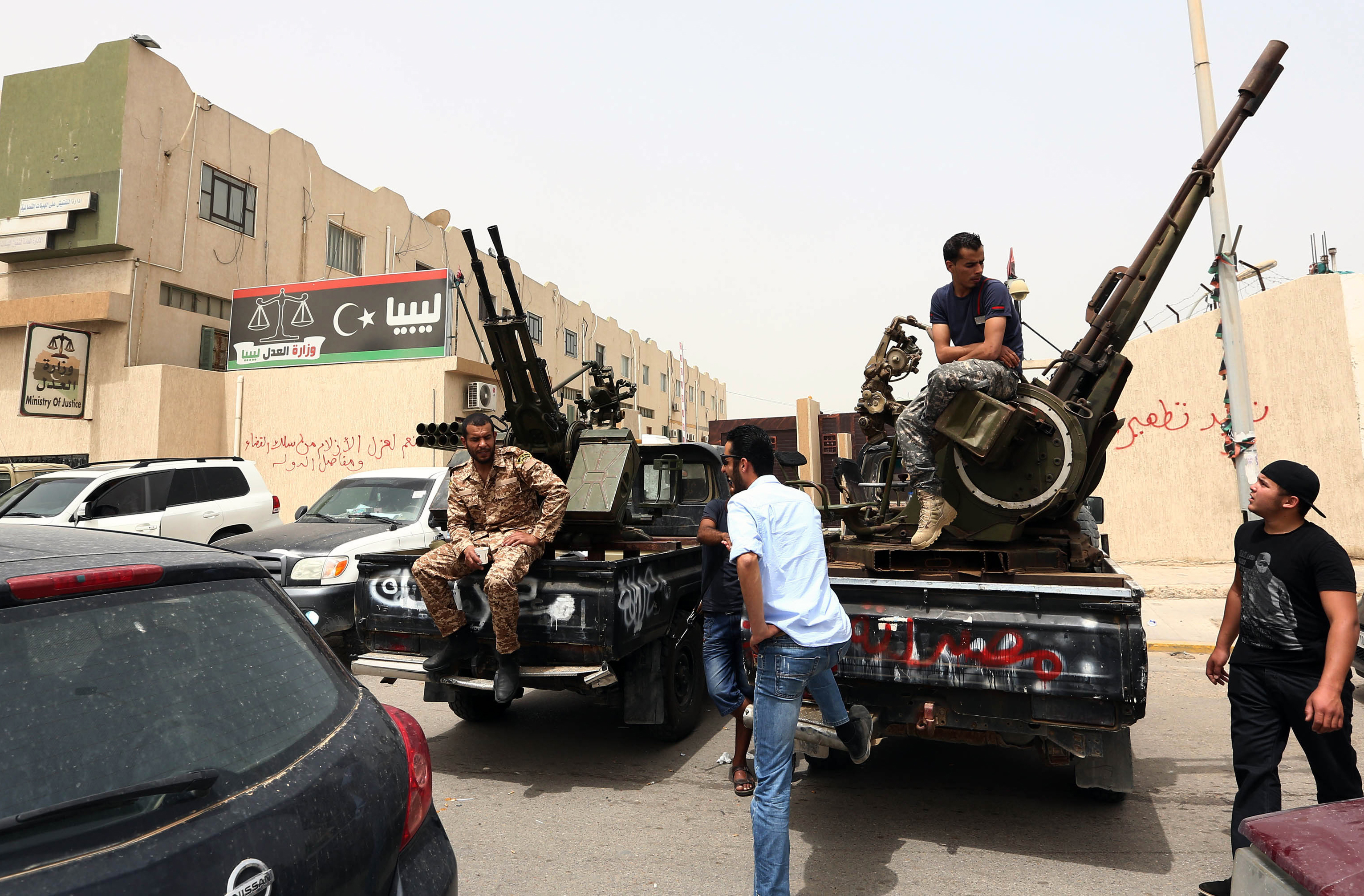 TRIPOLI, Libya Driving trucks mounted with anti-aircraft guns, dozens of militiamen surrounded the Justice Ministry in Tripoli on Tuesday, the third day of confrontation between the government and armed groups in the Libyan capital.

It was the latest in a series of shows of force by militias, most of which have ended without bloodshed but interrupted the country's political transition and created a climate of intimidation and a weakened state.

Militias, some of which evolved out of the rebel groups that overthrew Muammar Qaddafi in 2011, say they are rising up to force officials from the deposed dictator's regime from holding government posts, according to the state-own news agency LANA.

However, Libyan democracy activists say that they are bullying the government of Prime Minister Ali Zidan, who has vowed to restore the authority of the state, to prevent him from disbanding them.

On Tuesday, militiamen sealed off the roads to the Justice Ministry with their trucks, closed the building and turned away visitors.

On Sunday, about 200 armed men surrounded the Foreign Ministry and a day later, armed men stormed the Interior Ministry and a state-owned television station al-Wataniya TV, forcing its employees out and stopping its live broadcast. Journalists said they were beaten up and intimidated.

The unrest comes as Libya's legislature, the General National Congress, debates a draft law for "political isolation" which effectively filters out those who held any post under Qaddafi from political life.

An initial version of the law presented to the parliament would have banned a whole ruling class from politics, even though some had minor posts or left the government decades before the 2011 uprising against Qaddafi. One figure who might be targeted by the law, GNC head Mohammed el-Megarif, was ambassador to India before defecting to the opposition in 1980. A second is Mahmoud Jibril, a former aide to Qaddafi's son and the liberal-leaning head of the National Forces Alliance, the bloc with the biggest number of seats in parliament.

But the latest version of the draft law, posted on the official Facebook page of the GNC on Monday, included a new article that gives parliament powers to exempt some figures from the law, in apparent attempt to prevent removal of key figures.

That version is unlikely to satisfy the protesting militias and others who want a thorough purge of Libya's political class.

The militias' moves over the past days forced parliament to suspend its sessions until May 5. Politicians say the repeated shows of force have delayed the key process of drafting Libya's post-Qaddafi constitution.

Independent lawmaker Mohammed Somoud told The Associated Press on Monday that parliament is halting sessions because "there are people who want to turn against legitimacy," in reference to the militias.

"The situation is very dangerous and I am very saddened. I talked to those youth and told them you are playing with fire," he said.

The parliament, which has been criticized for incompetence and failure to pass key measures, has been further weakened by successive attacks by militiamen.

One of the worst occurred in mid-March when the parliament met to discuss the political isolation law away from its usual venue. Militiamen stormed the building and fired gunshots in the air. Members of parliament were trapped inside for several hours before they were allowed to leave. Vehicles in Megarif's convoy were hit by bullets as he left, although no one was wounded.

More than a year after Gadhafi's ouster and death in an eight-month civil war, Libya is struggling to rebuild its state institutions, including an army and police that could keep militias under control.

Prime Minister Ali Zidan told reporters in Tripoli that the security situation continues to be perilous. He stopped short of saying which militias or armed groups might be behind the incidents.

"If the situation persists, it will give Libya a bad reputation and lead to foreign companies pulling out and embassies closing down," he warned.

Zidan was himself besieged in his office last month by militiamen over remarks he made threatening to summon outside help to confront the armed groups.