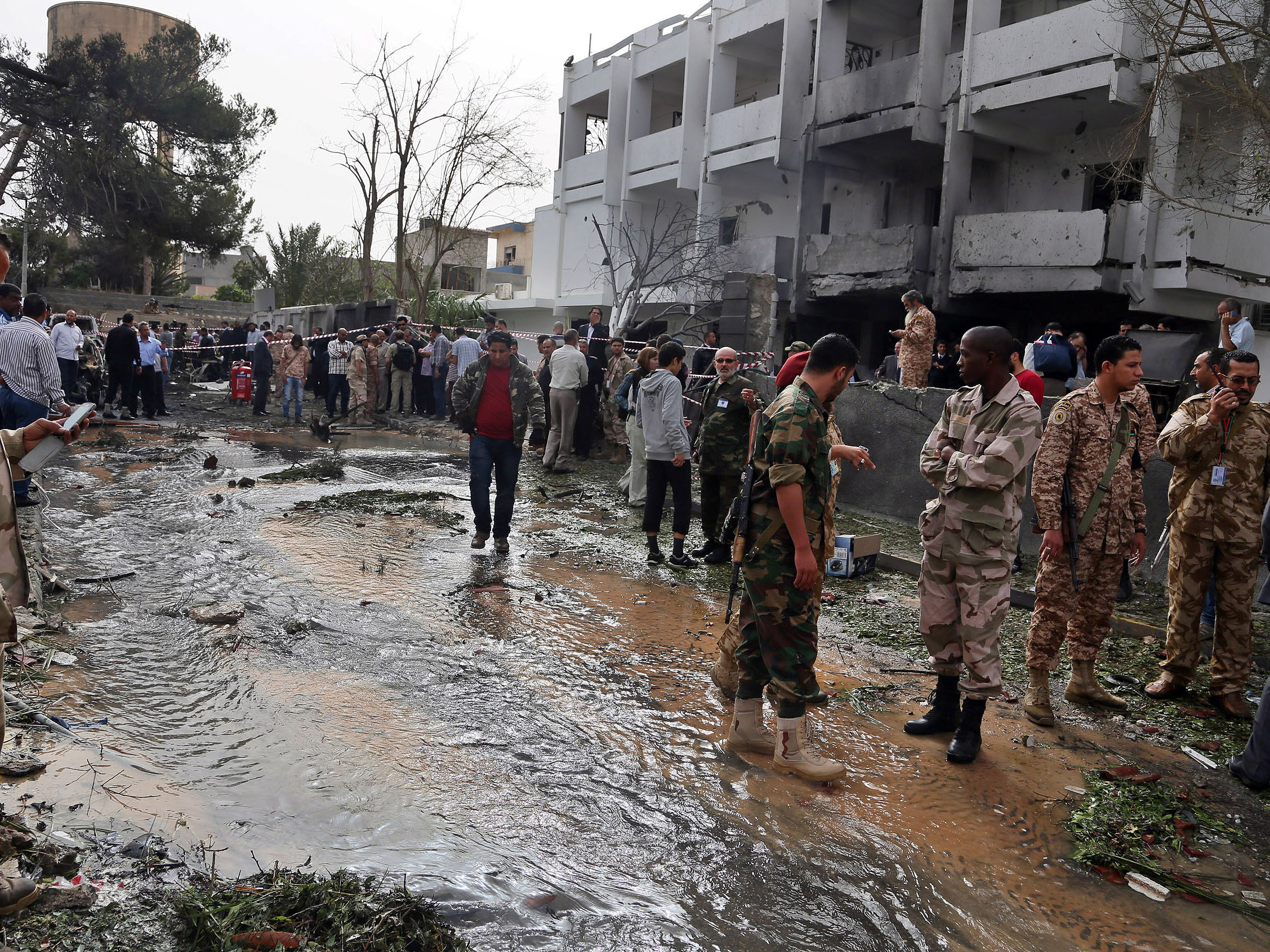 TRIPOLI, Libya A car bomb targeted the French Embassy in the Libyan capital early Tuesday, wounding two French guards and a Libyan teenager in an attack that President Francois Hollande denounced as an assault not only on France but all countries engaged in the fight against terrorism.

The explosives-laden car was detonated just outside the embassy building in Tripoli's upscale al-Andalus neighborhood early in the morning, before any of the embassy staff had arrived inside the diplomatic mission, two Libyan security officials said.

The strong explosion wounded two French guards and set off a fire at the embassy entrance that engulfed some of the offices inside, the officials said. A Libyan girl in her teens, who was in a nearby house, was also hurt from the blast.

Two cars parked outside the embassy caught fire and two other nearby buildings were also damaged, said the officials, speaking on condition of anonymity because they were not authorized to talk to the media. Firefighters rushed to the scene of the attack as smoke billowed into the sky. Video from the scene showed charred walls on surrounding houses.

The officials said the motives for the attack — the first such assault on an embassy in the Libyan capital — were not immediately clear. The Libyan government condemned the attack and said in a statement posted on its official website that it "rejects such actions, which are directly targeting Libya's security and stability."

In Paris, President Hollande denounced the attack, saying in a statement that it targeted not only France but "all countries in the international community engaged in fighting terrorism."

"France expects the Libyan authorities to shed the fullest light on this unacceptable act, so that the perpetrators are identified and brought to justice," Hollande added.

Ahead of his flight, Fabius said "this bombing was intended to kill, but France will not bend." He added that France was reinforcing security throughout the Mideast and the Sahel region of Africa.

Earlier, Fabius called the bombing an "abhorrent act," and said that the foreign ministry was "in liaison with the Libyan authorities" and that France will "do everything it can to shed light on the circumstances."

French institutions in Tripoli, including schools and cultural centers, were ordered to immediately suspend their activities.

Two years after the country's civil war, Libya is struggling to maintain security, build a unified army and reign in militias, which include rebels who fought to oust the country's longtime dictator Moammar Gadhafi in 2011.

France, along with Britain, took a leading role in the NATO-led air campaign against Gadhafi's forces.

Hollande's predecessor, President Nicolas Sarkozy, was hailed by many in Libya for France's role, and Paris has sought to maintain close economic and political contacts with the new leadership in Tripoli.

However, the war left Libya awash with weapons, adding to the country's security challenges. An expert panel wrote to the U.N. Security Council this month warning that "Libya has over the past two years become a significant and attractive source of weaponry in the region."

It said civilians and militias remain in control of most weapons in Libya, adding that "the lack of an effective security system remains one of the primary obstacles to securing military materiel and controlling the borders."

On Sept. 11, four Americans — including the U.S. Ambassador in Libya Chris Stevens — were killed when militants attacked the U.S. diplomatic mission on the eastern Libyan city of Benghazi.

Also, in the post-Gadhafi turmoil in Libya, several diplomats, relief agencies and churches have come under attack and scores of Libyan security officials have been assassinated. In most cases, the government fails to nail down culprits or make arrests, either because of fear of counterattacks or the lack of capabilities to carry out a proper investigation.

French officials have expressed concerns about the possibility of greater instability in Libya, where they believe at least some rebel fighters from Mali fled following France's military onslaught to dislodge al Qaeda-linked militants who controlled the vast north of the West African country for months.

Last week, al Qaeda's North Africa branch, Al Qaeda in the Islamic Maghreb, or AQIM, threatened to seek revenge against all countries taking part in the French-led war in Mali, warning that no one who "participated in this ferocious attack" will be safe.

It called on "all Muslims to target France and its interests and subjects inside and outside France until it withdraws the last soldier from the land of the Muslims and lifts its support of rulers of the region." That threat came as part of a question and answer session on AQIM's new Twitter account.

AQIM operates a 7,000-kilometer (4,300-mile)-long strip across the Sahel region, including not only Mali but also portions of Mauritania, Niger, Algeria, Libya, Burkina Faso and Chad.

The two Libyan security officials said that one of the wounded guards sustained severe injuries while the other was lightly hurt, adding that an investigation into the attack was underway.

In his official Facebook page, al-Barassi said that the explosion wounded a girl from the neighborhood while she was having breakfast in her house.

Libyan Saqr al-Qarifi, whose house is adjacent to the French embassy, said the explosion woke him up around 7 a.m.

"I heard a loud boom and immediately after that windows were shattered and parts of my house were damaged," he said. He recounted seeing less security troops around the embassy lately.

"It struck me over the past days that the guards had vanished from the vicinity of the embassy," he said. "I was wondering how come they leave the French embassy with no security?"